ALLIE ON CRTV: The best argument conservatives can make for small government is our own compassion.

PAY TO SLAY: Earlier this year, the President promised to cut funding to the terrorist affiliated Palestinian Authority (PA) as long as they continued to reward the families of terrorists.

Now the President’s Administration has gone a step further, cutting off even more funding by withholding a significant sum of money – roughly $200 million dollars – that had been previously earmarked to go to the PA.

ENTERTAINERS: I really appreciate Parton’s smart attitude. It escapes me why left-wing entertainers think they can influence anyone by spewing their polarizing, hate-filled politics all over us. The only concrete impact any of them have had on me is to reduce the number of new movies I will order from Netflix and to thin out my personal DVD collection. How is it entertaining to watch someone who has expressed his or her personal loathing for my values? 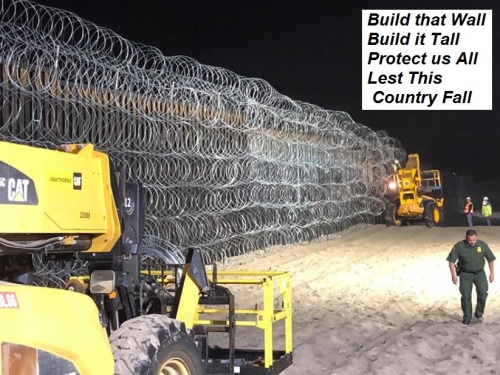 BORDER: Almost 500 of those “peaceful” rock-throwing, would-be immigrants tried to storm our southern border the way they stormed Mexico’s. The Mexican cops just stood aside and let them go by, but our guys tear gasses them. Mexico says it will deport everyone who participated.

TDS TWEET: Fortunately for my Netflix queue and DVD collection, I already didn’t like Alyssa Milano, who tweeted President Trump: “You tear-gassed women and children, asswipe! And on Thanksgiving weekend, you piece of shit, asshole, motherfucking, evil-creature-person!!” Dunno why she’s so pissed, seeing as Barack did the SAME THING five years ago!

SPATCHCOCK CIVILITY: Michelle Malkin talks about “Murphy Brown” threatening ICE agents and discusses the fact that, when Republicans do it, it’s “promoting violence”; when Democrats do it, it’s just LOL.

ASTROLOGY IS GIRLIE: So straight guys hate it, but chicks and gay guys are cool with it. Or something. Me, I hate it because the Bible forbids divination. But Eric makes a good point too. LOL

I LOVE MINIS: But wow oh wow, is this way beyond anything I’ve ever even imagined! The stove, oven, and sink WORK. And I just bought a full sized spatula like she uses. The cakes she makes are amazing. My only question is … who could bear to eat them?!

A Brief History of Climate Alarmism

To put the latest climate “science” report into context, here is a timeline from the last 120 years’ worth of climate “scientists” claiming the climate was going to kill us by becoming either too cold or too hot.

WHO CARES, SO LONG AS POLITICIANS GET MORE POWER?

In the American Thinker article that provided this list, Jack Hellner points out that alarmist scientists, bureaucrats and politicians never mention how many lives have been saved every year or how much our longevity and quality of life have improved because of fossil fuels. They also never mention all the lives that would not be saved or improved by the draconian energy policies the Left wants, policies that would prevent poor countries from ever developing the kinds of industries that have so enriched our lives. It seems like these things should be part of the discussion.

Comments Off on A Brief History of Climate Alarmism