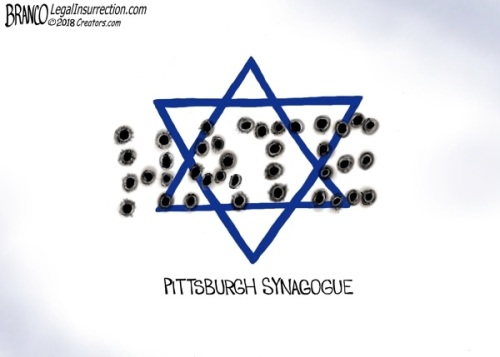 TREE OF LIFE: Hundreds of people attended an impromptu vigil outside the Pittsburgh synagogue to show support for the victims. To their credit, none of the local politicians indulged in the finger-pointing we saw national Democrats doing.

HONORING: The American flag is flying at half-mast above the White House today as our Nation grieves the 11 victims of a despicable act of mass murder Saturday at the Tree of Life Synagogue in Pittsburgh, Pennsylvania. “Anti-Semitism and the widespread persecution of Jews represents one of the ugliest and darkest features of human history. The vile, hate-filled poison of anti-Semitism must be condemned and confronted everywhere and anywhere it appears.” – President Trump

HELPING: An Iranian immigrant named Shay Khatiri put together a Go Fund Me page for the victims of the shooting that raised over a half a million dollars in just a little over a day.

PUNISHING: The U.S. Attorney’s Office intends to pursue the death penalty against Robert Bowers, who has been accused of shooting and killing 11 people in a Pittsburgh synagogue Saturday. It was the largest mass shooting targeting Jews in American history.

OUR BIRTHRIGHT: “Every American has a right to express his views, no matter what Twitter thinks. It’s our birthright, the most important freedom we have. We’re not giving it up on this show. On our set, you’re free to say what you believe, even if we disagree with you. Free expression doesn’t cause extremism. It solves extremism.” – Tucker Carlson

DESPERATION: “My Democratic colleagues have grown desperate. In the two years their party has sat on the sidelines, our nation has thrived under Republican leadership. That must be why, month after month, on issue after issue, Democrats and their far-left allies have tried to replace inconvenient facts with pure partisan scare tactics,” Senate Majority Leader Mitch McConnell writes in The Washington Times. “When facts fail, the far left ratchets up the fear.”

CARAVAN: The military is preparing to send approximately 5,000 more active duty troops to the US-Mexico border, officials said Monday. “Operation Faithful Patriot,” is expected to start on November 5 and go until December 15. Officials also emphasize because the troops are there to support civil authorities, it is not expected they will come into any regular contact with migrants. If the troops carry arms, it will be solely for self-defense. This deployment is separate from an ongoing National Guard effort along the border to support border authorities with technical assistance. That mission has approximately 4,000 personnel authorized but only 2,100 are currently in place according to the Pentagon.

MIDTERM AD: “Things are getting better. We can’t go back.”