I had a checkup today, the first weigh in since I started my 16:8 fasting:eating and low carb diet plan. I’VE LOST TEN POUNDS!!! It’s been 11 weeks since my last checkup. I started the new eating plan 5 days after that, so I have lost approximately one pound a week. WOOHOO!!!

TRUMP BORDER WATCH: “I am watching the Democrat Party led (because they want Open Borders and existing weak laws) assault on our country by Guatemala, Honduras and El Salvador, whose leaders are doing little to stop this large flow of people, INCLUDING MANY CRIMINALS, from entering Mexico to U.S.,” the President said. “In addition to stopping all payments to these countries, which seem to have almost no control over their population, I must, in the strongest of terms, ask Mexico to stop this onslaught – and if unable to do so I will call up the U.S. Military and CLOSE OUR SOUTHERN BORDER!”

EARLY BALLOTS: In 2016, party ID was the single best predictor of a vote according to Pew—very, very few party switchers, but those that were, by 2:1, went from Dem to Republican. An examination of ballot requests and early voting returns show Republicans are leading. D’s are behind 2016, which is to be expected since voting is always lower in midterm than presidential years. But what’s unexpected is that R’s are AHEAD of 2016!

SOCIAL MEDIA: Yesterday Twitter locked LifeSiteNews out of its account over an article they had posted four years ago that provided expert analysis (e.g., CDC) on the rise in sexually-transmitted diseases among homosexuals. LifeSite sent out a request to its members to complain and more than 7,400 did. Notably, LifeSiteNews also received support from self-described homosexuals who argued that knowledge about health risks saves lives. Less than 24 hours after declaring factual health statistics to be “hateful”, Twitter backed down and unlocked the account.

VIRAL VIDEOS: Satire is fighting the lies about abortion.

FAUXCAHONTAS: Elizabeth Warren and her DNA disaster prove that she doesn’t have what it takes to take on Trump in 2020.

DEMOCRATS: Remain calm All is well.

TURN ABOUT: A campaign event in Coral Gables that was supposed to star Democratic Minority Leader Nancy Pelosi and Democrat Rep. Barbara Lee didn’t go as planned on Wednesday after protesters converged on the locale to let “Communista” Lee and company know how they felt about the congresswoman praising Fidel Castro. The approximately 25 protesters behaved like an ANGRY MOB, pounding on the door and shouting! Can you IMAGINE anyone acting like that?! A Democrat observer said, “It’s unfortunate that a group of peaceful citizens can’t engage with the candidates they support, while the protesters get to do whatever they want.” I know, right?

FIGHT IN THE STREETS: Senator Tim Kaine (D-Va.) said liberals must “fight in the courts, fight in the streets” and “fight at the ballot box.” Yeah, that’ll keep things civil. Fershure.

ROSIE: Rosie O’Donnell said on MSNBC Thursday that she wants to send the U.S. military to the White House to “get” President Donald Trump. The MSNBC panel of journalists and pundits burst into laughter and Washington Post’s Eugene Robinson said, “That’s actually a pretty good idea.” Uhhhhhhhhhhh … do they realize that the military — particularly in the upper ranks – is predominantly Republican? This reminds me of a comment I saw on my Facebook feed yesterday about Democrats encouraging violence. “Do they realize that we have most of the guns?” ::snort::

THEY SHOULD NOT HAVE LEFT OUT THE FLAG: “First Man,” the Neil Armstrong biopic about the 1969 moon landing, failed to blast off in the box office weekend following a heated controversy over director Damien Chazelle’s decision to omit the astronaut’s planting of the American flag on the lunar surface. The film could be a major loss for Universal Pictures.

LOSING UNIONS: For decades, union members have aligned with the Democratic Party. The latest Pew poll shows this is changing.

GOSNELL: Because of pro-lifers’ efforts, more theaters will be showing the movie for the first time this weekend

AUNTIE MAXINE: “What are your thoughts about people thinking for themselves?” (Yes, that’s really the question she was asked.) “We have to understand what’s our lane. Are we best when we stay in our lane.” Shorter Maxine: Don’t you darkies DARE leave the Democrat plantation!

Trump Has Shown the Way

Trump Has Freed the Republican Party from the Media

Trump is not media made. He is self-made. The legacy news cannot disconnect the bond between Trump and his base. It has become evident that a candidate that blows off attacks and does the opposite of Republican tradition can succeed. The left does not understand how to deal with this. They have never received pushback.

Trump has beaten the self-proclaimed geniuses at major news networks for over two years. The irony is the left claims he is mentally ill. That must be embarrassing being controlled by someone who has “mental issues.”

Comments Off on Trump Has Shown the Way

Actress Kristen Bell, who played the voice of Anna in Disney’s “Frozen,” argued there are plots points in the 1930s classic “Snow White and the Seven Dwarfs” that could be problematic for young children.

“Don’t you think that it’s weird that the prince kisses Snow White without her permission?” she said she asks her daughters. “Because you can not kiss someone if they’re sleeping!”

No one benefits from her latest venture back onto the political scene.

The Clintons, it seems, can’t seem to call it quits, even if it means leaving members of their own party cringing and many more voters ready to “headdesk” themselves into a coma. END_OF_DOCUMENT_TOKEN_TO_BE_REPLACED

Stop Them Now or You Never Will 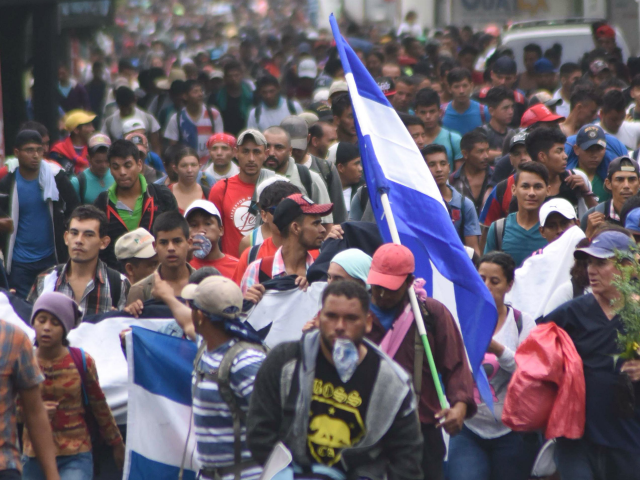 “I must, in the strongest of terms, ask Mexico to stop this onslaught – and if unable to do so I will call up the U.S. Military and CLOSE OUR SOUTHERN BORDER!” Trump wrote on Twitter.

“The assault on our country at our Southern Border, including the Criminal elements and DRUGS pouring in, is far more important to me, as President, than Trade or the USMCA,” he wrote.

Comments Off on Stop Them Now or You Never Will

Mess With the Bull…

Jon “the Truth Molester” Tester savaged Trump’s nominee to manage the Veteran’s Affairs department. He made the president angry. As Bruce “The Hulk” Banner always said: “Don’t make me angry. You wouldn’t like me when I’m angry.” Now the Donald is drawing a bead on him in Montana.

Trump targeted Tester for defeat after the Democrat made allegations public that derailed the president’s Veteran Affairs nominee Ronny Jackson in April. The allegations against the White House doctor included drunken behavior, over-prescribing prescription drugs, and fostering a hostile work environment. Jackson has denied the accusations.

Trump tweeted late Wednesday that Tester had made “vicious and totally false statements” about Jackson and that the Democrat “looks to be in big trouble in the Great State of Montana!”

Comments Off on Mess With the Bull…

These People Are Insufferable

Any business that so much as allows a Republican to patronize them is assaulted, mocked, boycotted, and threatened with violence. So it was with Tennessee senatorial candidate Marsha Blackburn.

Rep. Marsha Blackburn (R-Tenn.) thanked the owner of a Tennessee restaurant on Thursday for hosting a campaign event for her after the owner received death threats and insults for letting Blackburn rent an event room at his establishment.

Courtney told the Post that his life has been threatened over his decision and his staff had been verbally accosted, though he said that he has not filed a police report over the threats.

Courtney told the paper that he had been called Nazi and an abuser by some people online, adding that such comments had hurt his business, staff and family.

Comments Off on These People Are Insufferable