Nazi or Antifa? How to tell them apart

END_OF_DOCUMENT_TOKEN_TO_BE_REPLACED

HAPPY BIRTHDAY to my Dearest who turned 30 on our honeymoon which makes him … umm … 69 years old today. I love that I have been privileged to spend almost 40 years knowing this good man! 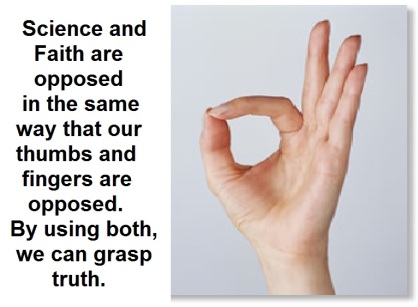 END_OF_DOCUMENT_TOKEN_TO_BE_REPLACED

Comments Off on Science and Catholicism

These folks are among the best America has to offer. Liberals don’t understand helping others out of Christian charity if there’s nothing in it for them.

A Gilbert Boy Scout troop’s trailer containing camping supplies was reported stolen over the weekend, and members of the Cajun Navy have helped the group out.

The trailer contained all of Troop 60′s equipment for their upcoming camping trip. Without it, they were not sure how they were going to go camping.

Then, the Cajun Navy stepped in.

“So the Boy Scouts Troop 60 had all their gear and trailer stolen by someone without a heart…so we are re-suppying them!” the crew said on their Facebook page.

Comments Off on God Bless the Cajun Navy

A Deal with the Devil

The only reason why the battle over the supposed Native American ancestry of Sen. Elizabeth Warren, D-Mass., continues to generate headlines is identity politics.

If we had spent the last 50 years moving toward character instead of skin color as a much more sensible way to define ourselves, would anyone outside of her family and friends care about Warren’s heritage? Why should they?
END_OF_DOCUMENT_TOKEN_TO_BE_REPLACED

Comments Off on A Deal with the Devil

Invasion for Fun and Profit

This money now and a lot more once you get across the border. Just remember to vote Democrat.

Soros? GOP congressman posts VIDEO of CASH being passed out to caravan migrants

Now, to be fair, Gaetz is a bit of a bomb-thrower and not the most honest one either, so we shouldn’t just jump to conclusions that this is funded by Soros or some other nefarious leftist. But it certainly could be.

Comments Off on Invasion for Fun and Profit

The metaphors don’t get any better (or worse) than this.

A van carrying Hillary Clinton, fresh from throwing her #MeToo sisters under the bus this weekend, crashed into a parking garage pillar on the way to a New Jersey campaign fundraiser Tuesday for beleaguered Democratic Sen. Bob Menendez. At her side was Huma Abedin, ex-wife of convicted serial sexter and underage girl stalker, ex-Democrat Rep. Anthony Weiner.

Thankfully, nobody was hurt.

Question: Who could have possibly thought it a good idea for Hillary and Huma to front a women-themed party for Sleaze-Bob Menendez?

Answer: Only a conglomerate of liberal hacks and flacks with more blind spots than the Land of the Cyclops.

First rule of being a criminal…don’t get caught with the evidence.

The top Treasury Department employee who was charged Wednesday with leaking confidential financial documents pertaining to former Trump officials was apprehended the previous evening with a flash drive containing the allegedly pilfered information in her hand, prosecutors said in court papers.

Comments Off on Caught Red-Handed

One is just as repulsive as the other.

An exchange on Twitter between Geraldo Rivera and Michael Avenatti quickly escalated into some wild mud-slinging.

Reporters seem to act like juvenile delinquents when trying to out-scoop each other. The Secret Service is tasked with protecting the president and family members with their lives. They take their job seriously.

“The actions of the special agent in this incident were in no way intended to impede those rights or the media’s access to a Secret Service protectee,” the Secret Service said in a statement.

“The actions were taken solely in response to an abrupt movement by an unknown individual who later identified themselves as a member of the media,” the agency added.

Comments Off on Just Doing His Job