It Had to Figure

As reported here yesterday, the Republican headquarters in my hometown were vandalized the other night. A suspect has been arrested.

ROCKFORD, Ill. – 42-year-old Timothy Damm, of Rockford, was arrested for allegedly spray painting the word ‘rape’ and ‘shame’ dozens of times on the Winnebago County Republican Headquarters on Sunday morning.

Damm was present when police were investigating the crime on Sunday, and was interviewed by Eyewitness News.CHECKOUT THIS FAR LEFT NUTBALL 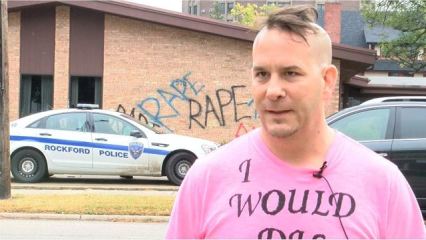 According to the criminal complaint, Damm danced on the table in the police interview room, stacked chairs and furnishings, and stripped down to his underwear. The complaint goes on to say that when police tried to escort Damm from the interview room he thrashed his arms and legs and refused to sit in the holding room. He was then taken to the floor and restrained in handcuffs.

One response to “It Had to Figure”