The Media Will Never Report This

Critics claimed he’d never do it.

The United States reached a trade deal with Mexico and Canada late Sunday night, providing Trump a crucial win as he has long promised to renegotiate the pact. END_OF_DOCUMENT_TOKEN_TO_BE_REPLACED

Comments Off on The Media Will Never Report This

With the blowhards that pass out the Nobel prizes to people like Yasser Arafat, Fat Al Gore, and Barack Obama, who hadn’t done anything, the charlatans can bask in the glow of phony glory.Why not? They don’t care.

Nobel Prize Committee Calls on Nominators to Give Up On Merits and Consider Diversity in Gender, Geography
The Nobel Prize Committee is no longer just concerned with the merits of your work — instead they are explicitly calling on nominators to “consider diversity in gender, geography and topic for the 2019 prizes.”
Of the 605 people who have won Nobel Prizes in scientific discipline, only 18 have been women.

Report: Flake wasn’t pressured, he masterminded the Kavanaugh delay
The “Flake-led rebellion” had “been building for nearly two weeks” 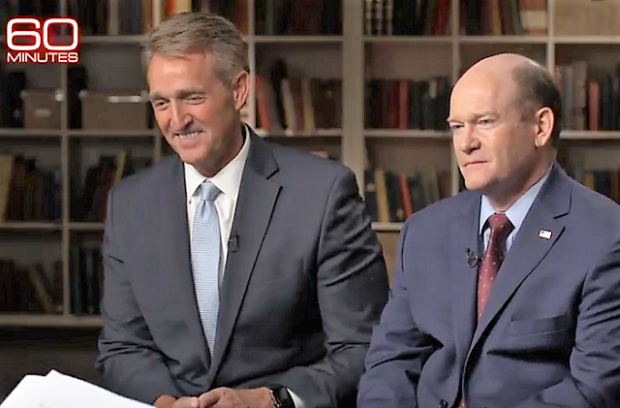 END_OF_DOCUMENT_TOKEN_TO_BE_REPLACED

Comments Off on It’s Pretty Simple

Nothing Will Stop Them

Top House Democrat: We’re Going To Investigate Kavanaugh If He’s Confirmed (And Move To Impeach Him)

You see, as we’ve written before, this was never just going to end when the Senate holds the confirmation vote. Rep. Jerrold Nadler (D-NY), the ranking member on the House Judiciary Committee, told ABC News’ George Stephanopoulos this morning that if the Senate doesn’t investigate these claim, including perjury, because Democrats don’t believe Kavanaugh no matter what, then the House will get the ball moving on looking into these charges.

Comments Off on Nothing Will Stop Them

NBC Cuts Feed As ‘SNL’ Credits Roll And Kanye Delivers Pro-Trump Speech
Kanye West delivered a speech to the cast and audience of NBC’s “Saturday Night Live” in spite of the fact that NBC had already apparently cut the feed, moving to the credits.
Think they’d cut off someone bashing Trump? Not likely.
NBC cut the feed and went to credits, running short on time, before West finished his musical performance — but West went on to deliver a speech in spite of the fact that he was no longer on the air.
Here’s what they didn’t want you to see: END_OF_DOCUMENT_TOKEN_TO_BE_REPLACED