ACCUSER’S LAWYER: Kavanaugh’s accuser is being represented by Debra Katz, a Washington D.C. lawyer and the vice chair of the board of the Project On Government Oversight, which is partially funded by George Soros.

WALL STREET JOURNAL: “[Ford’s] is simply too distant and uncorroborated a story to warrant a new hearing or to delay a vote. We’ve heard from all three principals, and there are no other witnesses to call. The only purpose of another public hearing would be a political spectacle in which Democrats could wax indignant for the cameras while Mr. Kavanaugh repeated his denials.” 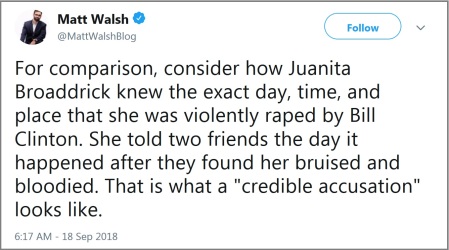 HYPOCRISY: Democrats say they believe women. Yeah, right. They “believe” women whose accusations support their political goals. The woman who accused Keith Ellison of domestic abuse says, “I’ve been smeared, threatened, isolated from my own party. I provided medical records from 2017, stating on two different Dr. Visits, I told them about the abuse and who did it. My therapist released records stating I have been dealing and healing from the abuse. … Four people, including my supervisor at the time, stated that I came to them after and shared the exact story I shared publicly, I shared multiple text between me and Keith, where I discuss the abuse with him and much more.” One wonders why this woman hasn’t made a #WalkAway video.

One response to “Kavanaugh’s Accuser”