Gov. Moonbeam getting grief from people who are even wackier than he is.
The mere thought of that is terrifying.

California’s status as a progressive bastion on climate change action has been challenged by activists who attempted to barricade the way to a major summit in San Francisco and decried the oil and gas drilling they say is blighting the health of low-income and minority communities. 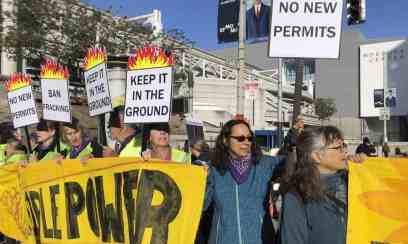 The Global Climate Action Summit is acting as a rallying point for cities, businesses and regions from around the world to outline plans to reduce greenhouse gas emissions.

Comments Off on Trouble in La La Land