You Get Three Guesses 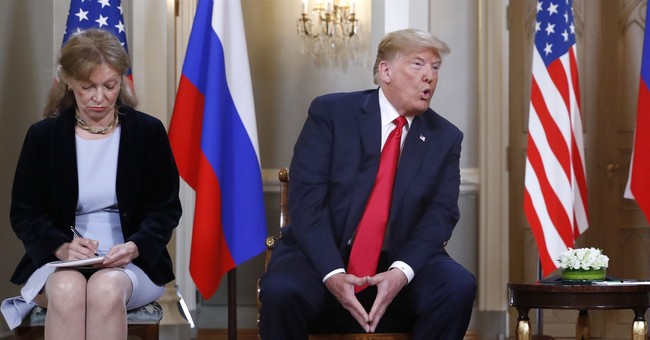 THE LEFT IS SO DESPERATE TO FIND ANYTHING TO HURT THIS PRESIDENT WITH,  THEY’RE NOW DEMANDING HIS (AND OBAMA’S) RUSSIAN TRANSLATOR TO TESTIFY WHAT WENT ON BETWEEN HIM AND PUTIN. OUR OLD FRIEND WAS RIGHT IN THERE, TRYING TO SUCK UP TO THE DEMOCRATS TO TRY TO LAND A TV SPOT.
Democrats in Congress demanded this week that Marina Gross, the translator in the room with President Trump and President Vladimir Putin in Helsinki, Finland on Monday, come to Washington and tell them what was discussed in the closed-door meeting.

One Republican, however, is siding with the Democrats in their call for Gross to at least turn over her notes. Sen. Jeff Flake (R-AZ) argued in a Senate floor speech that Trump’s rendezvous with the enemy demands that Congress see what was discussed.

One response to “You Get Three Guesses”