In a final betrayal of the party he was never really a part of, Paul Ryan seems to have convinced the president to approve a modified version of DACA. They can pretend this amnesty has limits, but we all know the party is owned by the Chamber of Commerce who covets the cheap labor. This would cost them their majority in Congress and be the effective end of the Trump presidency as he would be assailed with phony criminal charges until the end of his service. Hope they think it’s worth it. END_OF_DOCUMENT_TOKEN_TO_BE_REPLACED

Let’s hear it for FATHERS!

JUST A THOUGHT: Despite my having loads of rude stuff in my social media about how much I disliked both the Obamas, I routinely got offers to wish them a happy birthday/anniversary/mother’s-father’s day. I clicked on a couple of them and found they required one pony up the $$ for the privilege of signing the “card.” President Trump’s birthday was last week on Flag Day and today is Father’s Day. Despite having loads of stuff in my social media showing me to be a Trump fan, I haven’t gotten a single thing offering me the opportunity to wish him a happy whatever (while donating to the GOP). END_OF_DOCUMENT_TOKEN_TO_BE_REPLACED

After an 18-month investigation into the FBI and DOJ’s Hillary Clinton probe, the highly anticipated report from the Justice Department’s Inspector General Michael Horowitz is out. Some of the key takeaways include: 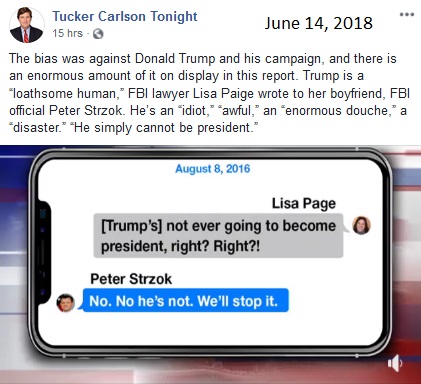 END_OF_DOCUMENT_TOKEN_TO_BE_REPLACED

Comments Off on The IG Report: Key Takeaways