WASHINGTON, D.C.—Under intense pressure from their left-leaning constituents to do something about the dangerous, Christian-founded restaurant chain, Democrats in the House of Representatives unveiled legislation Tuesday that would make it a hate crime to eat at Chick-fil-A.

The CFAHATE Act Of 2018 would make it a hate crime punishable by federal law to dine at the restaurant or use its drive-thru, with extra punishments for people who post that they’re eating at the restaurant on their social media accounts. The legislation would also impose heftier penalties for anyone who patronizes the extremist hate group’s chicken sandwich establishments during Pride Month.

“We want people making fast-food dining choices to think carefully about a restaurant’s background,” House Minority Leader and bill co-sponsor Nancy Pelosi said in a video posted to her official YouTube account. “If a restaurant’s leadership is associated with Christian values in any way, frequenting their locations amounts to literal violence against minorities, women, and the LGBTQ+ community.” END_OF_DOCUMENT_TOKEN_TO_BE_REPLACED

Pete did a superb job of covering the BIGGEST NEWS STORY OF THE DAY! I’ll just give my nod to it by noting that the New York Post honored the seriousness of the event with a no-jokes cover. 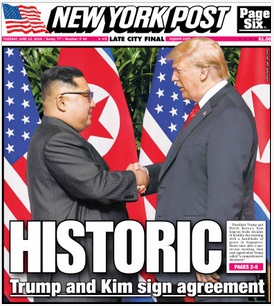 Proclaiming the Gospel of Salvation

The following is my very-much-shortened version of an essay circulating the internet that starts “I was a Catholic once.” I found what I think may be the original net posting: “How Do Catholics Hear The Gospel?” by Gary Michuta (from Hands-On Apologetics, March/Apirl 1997. Copyright Thy Faith, Inc. 1997).
http://www.ewtn.com/v/experts/showresult.asp?RecNum=396190&Forums=0&Experts=0&Days=2003&Author=&Keyword=head&pgnu=1&groupnum=11&record_bookmark=2764