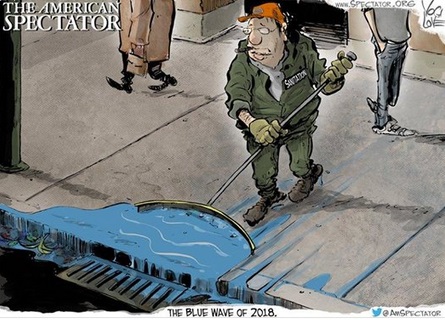 MAGA RULES: With 90% negative media coverage, Trump has still managed to impress the American people. His approval rating just hit 45%. At this point in their administrations, Obama and Reagan were at 44%.

VOTER FRAUD WIN: SCOTUS just ruled that swing state Ohio can purge voters from the state’s registration records if they fail to vote multiple time, then also fail to respond to a written notification. This is a blow to Democrats who rely on messy voter rolls in order for people to vote multiple times.

END_OF_DOCUMENT_TOKEN_TO_BE_REPLACED

Introducing a performance by Bruce Springsteen, the actor twice denounced the president, but his words were bleeped out for TV audiences.  “It’s no longer down with Trump. It’s f*ck Trump.” The applauding audience rose to its feet. END_OF_DOCUMENT_TOKEN_TO_BE_REPLACED

A Special Place in Hell

Were it not for his last name, Canadian PM Justin Trudeau would be cleaning stalls at the RCMP stables. The seven members of the G7 Conference had tentatively agreed to drop tariffs and President Trump jetted off to Singapore for his historic meeting with Kim Jong Un. As Air Force One took off, Trudeau went before the cameras and announced additional tariffs on American imports. You don’t stab someone like Donald Trump in the back and get away with it.

Trump economic adviser: Trudeau ‘stabbed us in the back’

Kudlow specifically took issue with Trudeau’s comments at a post-summit press conference, and repeatedly called the Canadian’s actions a “betrayal.”

END_OF_DOCUMENT_TOKEN_TO_BE_REPLACED

What better time to mess around with your water toys than right after it has rained?!

Comments Off on MASCOTS: Water Play