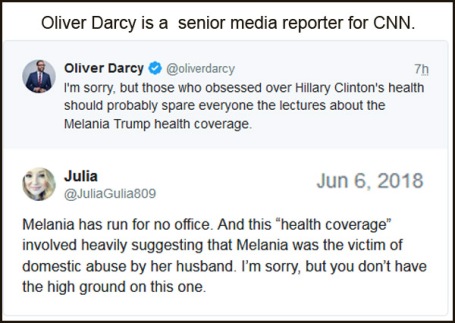 According to these twits, it is “journalism” to speculate (i.e., make up crap) about why Melania chooses to recover from surgery in private, but it was “sexism” for voters to want to know why a presidential candidate had nonstop coughing fits at rallies and was filmed being thrown into a van after falling ill during a 9/11 memorial. END_OF_DOCUMENT_TOKEN_TO_BE_REPLACED

Why we stand: A celebration of America

Yesterday, with the Philadelphia Eagles football team mostly unwilling to come to the White House for a commemoration of their Super Bowl championship, President Trump welcomed Eagles fans and others for a different kind of celebration.

END_OF_DOCUMENT_TOKEN_TO_BE_REPLACED

Comments Off on Why we stand: A celebration of America

How Very Sad It Is

The history of the world changed 74 years ago today. The continent of Europe was invaded to end Nazi tyranny. Those men were heroes. Every. Last. One. Of. Them. We learned about them in school. Our fathers and grandfathers were there. Some came home. Some are still there.

In our education system today, American history isn’t even taught. Kids have no idea where their freedom came from and who paid for it. They don’t care. They’re preoccupied with social nonsense of the day, mostly life with a phone in their hand.

There are but a very small handful of men who went through that hell. They’re almost gone. When they are, so will end the best we ever had as a nation. Most kids today never even heard of World War II. They couldn’t care less. Too bad they don’t realize that these men were more badass than these snowflakes ever dreamed of being.

Today Is The Anniversary Of D-Day. Here’s How Bada** Our Paratroopers Were

It’s almost hard to put into words just how incredible the paratroopers who brought the fight to the Germans really were. These were young men, often younger than myself, who were jumping out of planes to surprise, fight, capture and kill the enemy on that fateful day in Normandy

Click on the title to see more. You know the drill.

Because she loves a man the left despises, she is fair game for shabby treatment by liberals. After her surgery she didn’t make a public appearance for more than 3 weeks. She doesn’t need to bathe in the spotlight like some former First Ladies did. END_OF_DOCUMENT_TOKEN_TO_BE_REPLACED