Click on “Bits & Bytes” above or “Continue reading” below to see my choices for today. 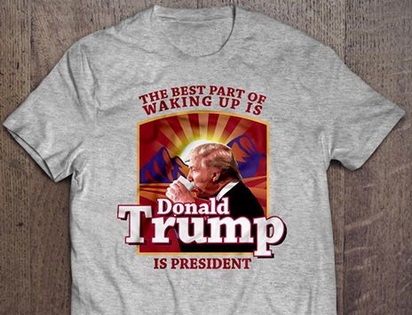 TRUMP ECONOMY: The latest National Federation of Independent Business employment survey showed the highest percentage of small companies raising wages since the NFIB started asking about it in 1986.

TRUMP ECONOMY: The Department of Commerce for April shows that U.S. consumer spending is accelerating, signaling a strong job market.

FACT CHECK: ABC/Disney is being run by left-wing scumbags. They hired a convicted child molester to work on a children’s TV show just 1 year after he was released from prison. They fired Roseanne and canceled her #1 show within hours of her posting a single, obnoxious tweet.

TRUMP FOR LIFE: Trump’s Department of Health and Human Services’ (HHS) Office of Civil Rights has sent letters to Hawaii and California, notifying them that the government is investigating whether their requirements that crisis pregnancy centers inform women how to obtain government assistance for abortions violate federal civil rights rules. HHS is also examining California’s mandate that most health insurance plans cover abortions.

SCOTUS FOR LIFE: The U.S. Supreme Court refused to block an Arkansas law requiring physicians who dispense powerful abortion-inducing drugs to have admitting privileges at nearby hospitals. Planned Parenthood in Fayetteville whined that the decision forced them to cancel appointments. The law was passed in 2015. They’ve had three YEARS to comply. Obviously, they didn’t bother. Cry me a river.

MARKETPLACE KARMA: Two companies have suspended ads from Samantha Bee’s television show after the “comedian” made a extremely vulgar remark about first daughter Ivanka Trump. Unlike Roseanne Barr, Samantha Bee has not lost her job.

MARKETPLACE KARMA: Starbucks donates to Planned Parenthood, which (in keeping with its racist founder’s agenda) targets minorities for self-extinction. I’m GLAD they wasted a ton of money on their self-indulgent “unconscious racism training” day.

MASS SHOOTERS CRAVE ATTENTION: “As a deterrent against this behavior, the names and faces of mass shooters need to be forever removed from our media reporting. Committing acts of tremendous evil should not be rewarded with the eternal infamy these murderers seek,” said Kyle Kashuv, a student at Parkland High.

JORGE BERGOGLIO IS WRONG: Juan Carlos Cruz, a victim of the Chilean clergy abuse crisis, told reporters last month that Pope Francis told him, “Juan Carlos, that you are gay does not matter. God made you like that and he loves you like that and I do not care. The Pope loves you as you are, you have to be happy with who you are.” Neither the Vatican nor the Pope has denied Cruz’s account. Church Militant’s Michael Voris emphasized that in making such a comment — if he indeed did make the comment — Francis was speaking not as the Pope but as a fallible man. “God does not make people gay, and such a person is not born that way.”