According to various weather reports, it reached nearly 90 degrees in Boston on Friday when she appeared in public wearing a heavy coat and scarf. The wind helpfully blew back the scarf to reveal what appears to be a back brace. 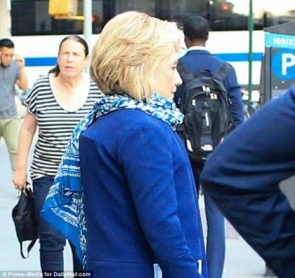 Remember when she was running (losing) for president (again) and they told us how it was NONE OF OUR BEESWAX what her health was like? Kinda like what they’re telling us now about investigating Obama’s corruptocrats’ efforts to keep Donald Trump from winning what they were ALL SURE WAS A SLAM DUNK ELECTION FOR HILLARY.

Stilton points out that “the swamp dwellers didn’t really worry about getting caught because they assumed the Queen of the Swamp would soon be President and would quietly bury their misdeeds as tidily as she’d buried Vince Foster and Seth Rich.”

He has such a way with words.