We sleep better because Trump is president 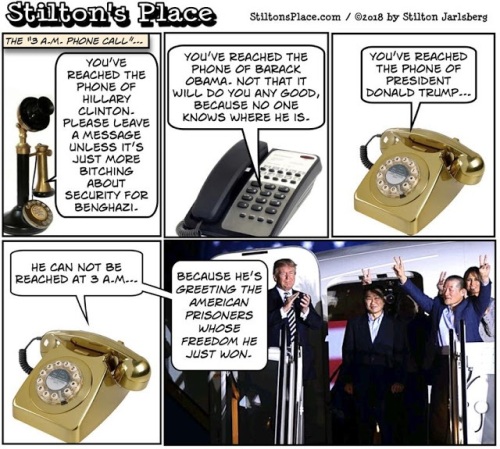 Many years ago, Hillary Clinton’s primary campaign for President scored big with a political ad about the dreaded “3 a.m. phone call.” The spot suggested that during a crisis (and what else happens at 3 a.m.?), Americans could sleep better knowing that a President Hillary was answering the call. …

As Secretary of State, Hillary took (ever so briefly) the phone call about the attack on our embassy in Benghazi. But then she ignored it, just like she had ignored the hundreds of previous messages from the embassy begging for additional security.

Still, Hillary did slightly better than Obama – who not only didn’t take the call but, to this day, hasn’t accounted for his whereabouts at the time. …

And then there’s the much-reviled President Trump.

Not only was he genuinely ready to deal with a crisis, at 3 a.m., he actually flew to Andrews Air Force Base to welcome home the three American prisoners released from North Korea.

Comments Off on We sleep better because Trump is president