Anybody at least my age remembers the day it happened. I was a senior in high school. The principal came on the PA system during homeroom and asked just for that day for the white kids and the black kids not to talk to each other. It was far different back then. Drugs hadn’t become a scourge, there was not a problem with violence and teen pregnancies. It was before the teachers, who unionized in the early 60s, had switched from educating students to pushing a far left liberal agenda the way they do now.
What sickens me is that the far left liberals and race baiters use his birthday to shout their racial hatred ‘in his name.’ In truth, King would be shunned by today’s Democrat party. He was a Republican who the Kennedy brothers had the FBI wiretap. He was not perfect. There was talk about him having extramarital affairs. A lot of people did, but it was not widely heard about thanks to the fact there was no alternative to the leftist media.
He preached pacifism and nonviolence but it seemed to follow wherever he went. White supremacy was much more pronounced then, especially in the South. Those white power advocates WERE DEMOCRATS — a fact glossed over in today’s telling of history. I heard a sound bite this morning of some black person, in a calm voice, talking about Black Lives Matter and Colin Coppernuts carrying on King’s legacy. His was a legacy of peace and racial harmony. Today’s racialists have no interest in coexistence. Their power lies in the feeble-minded who trust them strictly on the basis of their skin color who feed them the philosophy of hatred and resentment.
I recall rumors of Jesse Jackass being with him when he was killed. He allegedly took his shirt off, dipped it in King’s blood, and waved it like a bloody flag. That elevated him to some stature in the black community where he honed his skills in extorting money from white corporations and commanding his army of followers.
From Wiki:

Martin Luther King Jr., an American clergyman and civil rights leader, was shot at the Lorraine Motel in Memphis, Tennessee, on April 4, 1968. He was rushed to St. Joseph’s Hospital, and was pronounced dead at 7:05 p.m. CST. He was a prominent leader of the Civil Rights Movement and a Nobel Peace Prize laureate who was known for his use of nonviolence and civil disobedience.
James Earl Ray, a fugitive from the Missouri State Penitentiary, was arrested on June 8, 1968, in London at Heathrow Airport, extradited to the United States, and charged with the crime. On March 10, 1969, he pleaded guilty and was sentenced to 99 years in the Tennessee State Penitentiary. He later made many attempts to withdraw his guilty plea and be tried by a jury, but was unsuccessful; he died in prison on April 23, 1998, at the age of 70.
https://en.wikipedia.org/wiki/Assassination_of_Martin_Luther_King_Jr.

There are many accounts in the media on this day, none of which are a true reflection of the man and tend to blame the Caucasian race for his death and all the ills in our society. I’ll not post any of it here.

IF YOU SUPPORT PRESIDENT TRUMP YOU DARE NOT MENTION IT IN PUBLIC. MENTIONING HIS NAME TRIGGERS EXTREME VIOLENCE IN A LOT OF FOLK.
Cops are looking for two females who allegedly perpetrated the attack around 1 a.m. on March 16, outside the Surfside restaurant in northwest D.C.
According to Fox 5, the victim reported to police that she was involved in a conversation with the two women and a man who was with them, and at one point she stated, “I support Donald Trump.”
The victim said she drove herself to Suburban Hospital in Bethesda, Maryland, for treatment of her injuries, according to police.
A silent, 43-second surveillance video clip from police shows a woman wearing a white jacket and crop top lunging toward a person off-camera who appears to be recording her. The woman apparently tries to snatch the camera as the video image shook.
http://www.foxnews.com/food-drink/2018/04/02/trump-supporter-attacked-by-2-women-at-dc-restaurant-police-say.html

THE STATE SUPREME COURT HAD BEEN 5-2 CONSERVATIVE. THEY UPHELD THE LAW STRIPPING UNIONS OF THE POWER TO FORCE MEMBERS TO PAY DUES, EVEN IF IT WENT TO POLITICAL IDEALS THEY DID NOT APPROVE OF. THE REPUBLICANS SPENT $400,000 ON THE RACE, THE DEMOCRATS SPENT MILLIONS. THEY TRIED TO DEFEAT WALKER UNSUCCESSFULLY 3 TIMES IN 4 YEARS. THEY HATE HIM ALMOST AS HOTLY AS THEY HATE THE PRESIDENT.
Liberal Rebecca Dallet trounced conservative Michael Screnock in the race for a 10-year term on the state’s high court. Screnock conceded the race, and results continued to trickle in late Tuesday showing Dallet with a double-digit lead.
Walker, who is up for re-election to a third term next fall, tweeted that the results were another sign that the GOP is in trouble.
https://edition.cnn.com/2018/04/04/politics/wisconsin-supreme-court-democrats-win/index.html

A hallmark of the modern Democratic Party and Progressive Left in America is keeping racial tensions high. Whether affirmative action reverse discrimination — which is just discrimination — or college quotas or disparate impacts of any variety, the Left sees and lives through a prism of race either for social justice purposes or for cultural power purposes or electoral purposes.
The goal of racial harmony most certainly does not fit anywhere in the spectrum.
A recent New York Times article demonstrates this dynamic perfectly, and adds to the overflowing pot of evidence that most traditional media organizations can simply not be trusted to report honestly on race, along with the pantheon of other political and cultural issues.
“Tonight’s results show we are at risk of a #BlueWave in WI. The Far Left is driven by anger & hatred — we must counter it with optimism & organization. Let’s share our positive story with voters & win in November,” he tweeted.
https://therevolutionaryact.com/new-york-times-stokes-racism/

NBC Faces Backlash for Publishing Claim That Christianity Is Used to ‘Prop Up’ White Supremacy on Easter
Wilson-Hartgrove, who authored the 2018 book Reconstructing the Gospel: Finding Freedom From Slaveholder Religion, warned that Christians must “reclaim redemption from those who would use it to prop up white nationalism and bigotry.”
Although faith played a major role for abolitionist and civil rights heroes throughout United States history such as Martin Luther King Jr. and Frederick Douglass, Wilson-Hartgrove explained that history shows that stories of faith have also been used for “evil in our world.”
https://www.christianpost.com/news/nbc-faces-backlash-for-publishing-claim-that-christianity-is-used-to-prop-up-white-supremacy-on-easter-222371/

Under the Obama policy, in place now in more than 50 school districts throughout the country, students whose behavior would have previously drawn an arrest or a suspension are instead referred to “teen courts” or “restorative justice talking circles.” Students who receive such referrals could still be able to purchase a firearm even though they may have a history of violent behavior or threats.
This “disparate impact” policy is based on the assertion that minority students are disciplined at higher rates because of systemic racism by teachers and school administrators.
JUST A WILD GUESS… MAYBE THEY’RE TAUGHT CRIMINALITY IS ACCEPTABLE WHEN YOU CAN GET AWAY WITH IT.
http://www.breitbart.com/big-government/2018/04/03/trump-administration-urged-end-obama-era-misstep-school-leniency-rules-minority-students/

In the April 2 episode “Guest Starring John Noble,” the time-traveling superheroes set out to protect the first black president during his college years when he’s targeted by a telepathic gorilla known as Grodd who actually utters the phrase “time to make America Grodd again.”
Yes, everything in the show, including a young Barack Obama, is just as on the nose as that.
Team leader Sara (Caity Lotz) later even goes to college-aged Barry for advice since he’s “someone who can think straight when the whole world has gone crazy.” Right. That’s Barack Obama (pictured during his college days in the image to the right), so honorable and wise that even as a college student he’s beyond reproach.

“We demand of the United­ States … that they open the border to us because we are as much citizens as the (American) people are.” — Pueblo Sin Fronteras, on behalf of the caravan of illegal immigrants from Central America headed to the U.S. border.
A little tip if I may, mi amigos, as you caravan your way to the land of free milk and honey (not to mention housing and health care): Drop the “demand” lingo. It’s counterproductive. And besides, you don’t have to “demand” anything. America’s Democrats are more than happy to give it to you.
http://www.bostonherald.com/opinion/op_ed/2018/04/graham_dems_roll_out_welcome_mat_for_caravan

THIS INVADING ARMY OF PARASITES DON’T BELIEVE THEY CAN BE STOPPED FROM JUMPING ON THE GRAVY TRAIN
Trump confirmed in an afternoon press conference on Tuesday that he does intend to use military force to secure the border.
“We are preparing to have the military to secure our border between Mexico and the United States,” Trump said when reporters questioned him for more details. He said he would be meeting with Mattis and other security officials to discuss the issue soon. 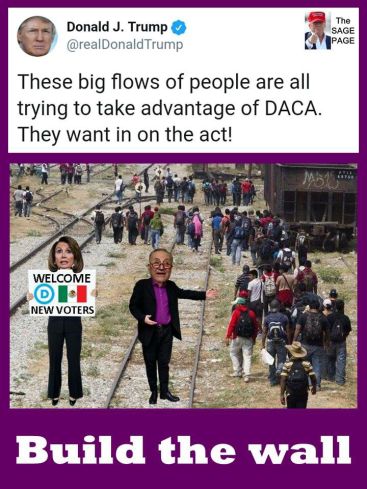 THEY WILL NOT BE DEPLOYED IN TIME TO STOP THESE INVADERS
http://www.breitbart.com/big-government/2018/04/03/trump-proposes-guarding-southern-border-military/ 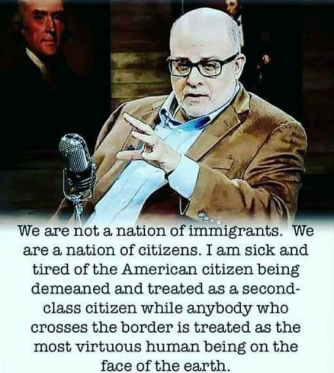 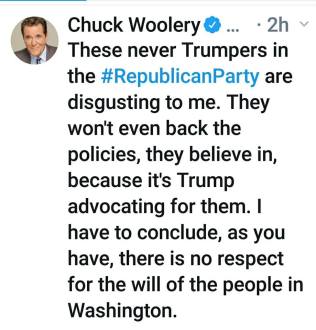 Comments Off on 50 Years Ago Today