Tucker: “The authorities failed to protect us, they lied about it, and they blamed us.” 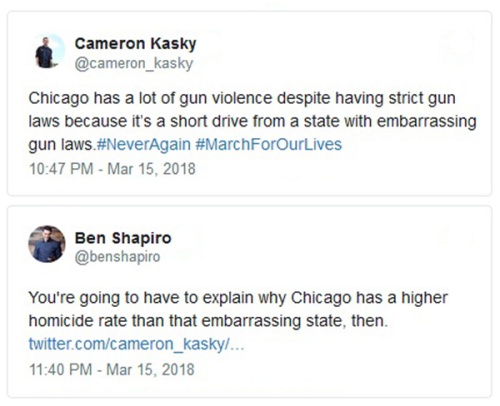 Feminazi prof is going to regret it

FIRE, the Foundation for Individual Rights in Education, has gotten involved in this case of a far left female professor who tried to punish a male student for expressing a viewpoint she doesn’t like.

Comments Off on Feminazi prof is going to regret it

In 2015, then-14-year-old Ahmed “clock boy” Mohamed brought a dismantled alarm clock to school and was subsequently suspended for three days and then arrested for making a “hoax bomb.”  The charges were later dropped and stuff came out suggesting his father had put him up to it.

Dear old dad has tried to capitalize on the thing by suing everyone from Fox News, Glenn Beck, and Ben Shapiro to the school’s principal.  Each suit has been dismissed, including, this week, the one again the city and school district.

Comments Off on Good!

Elizabeth Warren’s disputed claim to be Native American has been all over the headlines again, because she recently refused to take a DNA test.

A Cherokee genealogist says there is no indication of Indian ancestry anywhere in Warren’s lineage.

(The genealogist also appeared on Fox News on Mar 14, 2018 with Tucker Carlson, but didn’t add anything new.)

Comments Off on FAUXcahontas

I ordered this book and cannot wait to read it.

Video: Gary Stearman and Jonathan Cahn discuss his new book, The Paradigm: The Ancient Blueprint That Holds the Mystery of Our Times. What Jonathan Cahn says at the end is the MOST IMPORTANT PART.  “It’s not about politics. It’s about revival.” Praise God!

The discussion of Levi-Lewinsky made me curious about the meaning of the name Monica. While the meaning is unknown, it is “most likely of North African or Phoenician origin.” Jezebel was the daughter of a Phoenician king. Also, Monica Lewinsky is Jewish.

Jehu succeeded Joram, who had succeeded Ahab as king of the Northern Kingdom of Israel (aka, Samaria). Wikipedia says Jehu was “noted for exterminating the house of Ahab at the instruction of Jehovah.”  Would it be tacky of me to mention here that I wish Chelsea would just raise her kids and stop trying to be politically significant?

Once Jehu was in control of Samaria, “he summoned the worshipers of Baal and killed them. He then destroyed their idols and their temple and turned it into a latrine.”  Trump announced his candidacy in the summer of 2015. The actual Temple of Ba’al in Syria was destroyed in the summer of 2015 and the first thing President Trump did was reverse the Mexico City policy.  Interestingly, the name “Donald” means “world leader.”

Thinking about Hillary “Jezebel” Clinton slippy-sliding down those steps in India while Huma showed zero concern got me thinking about the original Jezebel’s messy end, when her own servants tossed her out a tower window and dogs ate her flesh (2 Kings 9:30-37).

Sources besides the Bible:

When I woke up Wednesday morning and saw that the race in PA-18 was too close to call, I knew Lamb was going to win. Democrats never lose close races…never. You have to be outside the margin that they can get away with cheating in order to prevail. Ballot stuffing, discounting overseas ballots, and precincts with 200 registered voters reporting more than a thousand ballots. All in a day’s work when you have no positive message.

Among the listed concerns are “miscalibrated” voting machines in Allegheny County, the only county of four in the district that went for Lamb, according to the source, who said there have been many reports of voters who intended to vote for Saccone ending up casting a ballot for Lamb.
Furthermore, Republicans say their attorneys were ejected from polling sites as the absentee ballots were still being counted and that due to confusion caused by the Pennsylvania secretary of state website people were directed to the wrong polling locations.
http://thegatewaypundit.com/2018/03/wow-republicans-say-pa-voting-machines-miscalibrated-saccone-votes-changed-lamb/?omhide=true&utm_source=TGP+Communications&utm_campaign=7e34ff0c4d-EMAIL_CAMPAIGN_03_15_2018&utm_medium=email&utm_term=0_b3f16dae4d-7e34ff0

The Democrats went back to Rahm Emanuel’s recipe for winning back the House in 2006…pick local candidates and have them run 10 miles to the right of Ronald Reagan. Lamb had family ties in the district and ran as a pro-tariff, pro-life, pro-gun patriot. He even ran a campaign ad holding an AR 15. Not many Democrats can get away with that. Of course, when he gets to his office in DC he’ll be greeted by some officials who will remind him he’s a Democrat. Just do what he’s told and the party will back him and he can make some good money. They also have the most potent weapon possible, a media that will cover for him and attack his opponents with no basis.

What may or may not be a surprise is that RINO Paul Ryan’s PAC backed the Democrat in this race:
In the most astonishingly bone-headed move since nominating Mitt Romney for President, the GOP establishment spent major cash to help elect Democrat Conor Lamb in last night’s highly contested PA-18 special election.
Yes, you read that right. Failed Vice Presidential Candidate Paul Ryan and his Congressional Leadership Fund pushed a Democrat to victory over a Republican with direct mail advertising touting support “for our Second Amendment Rights.”
https://canadafreepress.com/article/breaking-paul-ryans-pac-elected-democrat-conor-lamb

What it comes down to is this may be a harbinger of the midterm disaster awaiting the Republican party. The Democrat party has flipped almost 40 straight seats this year. Maybe special elections don’t draw much interest, or maybe Republican voters are becoming complacent since they hold all three branches. What is clear is that the GOP elite have shown that conservatives mean nothing to them. They sat around for a year, doing nothing to repeal and replace Obamacare. It wasn’t until the last days of the session they hastily got a tax reform done so they had something to show the folks back home. Whether the base comes out or not remains to be seen.
One thing is certain: the left has a singular maniacal obsession…get Trump. Nothing else matters. One gets nightmares thinking of that brain-addled whore Nancy Pelosi once again holding the speaker’s gavel. Maxine Waters, impeachment articles written a month earlier, dancing in the aisle, waving the paper in one hand and her cheap wig in the other, jumping and spinning like she had a rabid squirrel in her girdle. The inmates will have retaken the asylum.
The sad part is I doubt many of the Republicans would care. Leading is much harder than just sitting back, spouting platitudes about what they’d do, only if.
Most of them never liked Trump anyway, so what difference does it make?
We better make damn sure we’re ready; the Democrats sure will be.