Yesterday morning the blower on our furnace quit. The landlord sent over his HVAC guys, who determined which part they needed. Being an old furnace, there was only one place in town that had it and the landlord decided they wanted too much money, so he had a new furnace installed today. Everything is fine. I go to bed, and when the furnace kicks in it sounds like a tugboat engine, chugging away. After being woke up 3 times, I gave up. That’s why I’m sitting here, typing this nonsense while I wait to go do my newspapers. Sometimes you just can’t win.

I SEE THIS AS A SYMBOLIC RULING, ALBEIT A JOKE BECAUSE A MILLION BUCKS IS NOTHING IN A STATE ECONOMY THE SIZE OF CALI’S. IT DID, HOWEVER, SET THE LIBERALS OFF, AS IT ALWAYS DOES WHEN THEY DON’T GET EVERYTHING THEIR OWN WAY.
SAN FRANCISCO (CN) – A federal judge on Monday refused to order the Trump Administration to pay California $1 million in delayed law enforcement funding it withheld to punish it for becoming a sanctuary state.
“Given the number of open questions concerning the federal government’s positions concerning the provisions of the statutes in question, the relatively minimal injury its delay has caused thus far, and the extraordinary nature of the relief sought, I deny the state’s motion without prejudice,” Orrick wrote.
https://www.courthousenews.com/judge-denies-1-million-funding-in-sanctuary-cities-case/

“People Will Not Be Bowed,” Pelosi Explodes After Trump Admin Drops Hammer on California Lawmakers Protecting Illegal Aliens
Speaking in Sacramento Wednesday, Attorney General Jeff Sessions blasted California lawmakers for protecting illegal aliens in their ‘sanctuary cities.’
House Minority Leader Nancy Pelosi (D-CA) immediately fired back at the Trump administration’s move to finally put an end to the insanity of sanctuary cities.
The Democrats don’t even try to hide it anymore. They openly fight for the invaders who are leeching, killing and raping American citizens.

SESSIONS IS, I’M SURE, A NICE MAN, BUT HE IS A GUPPY DEALING WITH A SCHOOL OF SHARKS.
THEY KNOW HE’S A JOKE. DEMOCRATS NEVER GIVE IN. IF THEY DISAGREE WITH A LAW, THEY SIMPLY IGNORE IT. ALWAYS HAVE.
“Here’s my message to Mayor Schaaf–how dare you. How dare you needlessly endanger the lives of our law enforcement officers to promote a radical, open borders agenda.”
http://dailycaller.com/2018/03/07/jeff-sessions-how-dare-you/

Kamala Harris: AG Jeff Sessions Has No Credibility to Talk About History of Slavery, Reconstruction or the Civil War 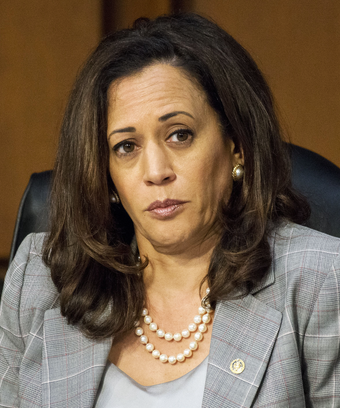 EVERY MAJOR URBAN TOILET IS PROTECTING THEIR ILLEGALS BECAUSE THEY ARE THE KEY TO THEIR DREAMS OF A TOTALITARIAN STATE WITH THEM AT THE TOP
The Denver Sheriff’s Department, it turns out, stopped honoring detainer requests back in 2014. They have plenty of company. Perhaps no state has done more to spit in ICE’s face than California. Last week, Oakland, California Mayor Libby Schaaf even encouraged “undocumented citizens” to evade the immigration authorities. In a social media post, she warned the community that ICE agents were planning a raid in the next 24 hours. Her heads up very well may have allowed hundreds of individuals to flee, because when ICE showed up, they found only 232 of the 864 illegal immigrants that were supposedly living there.
https://townhall.com/tipsheet/cortneyobrien/2018/03/07/denver-sheriffs-department-refusing-to-honor-ice-detainer-n2458579

A group of House Democrats has introduced a bill that would up the taxes on firearms and ammunition to pay for research on “gun violence and its prevention.”
Under the plan, ammunition would see excise taxes increase to 50 percent and firearms to 20 percent. Currently, manufacturers pay a long-running 11 percent excise tax on sporting firearms and ammunition under the Pittman–Robertson Act, which goes to fund conservation efforts such as hunter education programs, public shooting ranges and preserving wildlife habitat. The jump in fees under Davis’ plan would be set aside for public safety grants and research.
But that’s what gun grabbers want to do. They don’t just want to keep people from buying guns. They want to hurt the people who already have them.
https://bearingarms.com/tom-k/2018/03/06/democrats-pitch-bill-creating-50-percent-tax-gun-ammo-sales/

Media Bias? NBC Fails To Report Party Of Nashville’s Disgraced Democratic Mayor
I POSTED THIS ARTICLE YESTERDAY ABOUT THIS BROAD USING $10 GRAND IN TAXPAYER FUNDS TO HIDE HER AFFAIR WITH HER HEAD OF SECURITY. OF COURSE, YOU’LL NEVER HEAR ABOUT IT FROM THE MEDIA WHORES.

Baltimore Mayor: We Will Send 60 Buses of Kids to March Against Guns in DC — With Free Food and T-Shirts
Once upon a time — US schools taught reading, spelling and arithmetic.
Not today.
On Tuesday hundreds of public school students marched to Baltimore City Hall to protest guns.

THESE KIDS ARE PUPPETS, SAYING ANYTHING THEY’RE TOLD TO, WITHOUT A CLUE WHY.
THEY JUST WANNA GET HIGH, HANG WITH THEIR FRIENDS AND HAVE A GOOD TIME.
Mayor Catherine Pugh announced at the Tuesday rally that the city will send 60 buses to the march against guns in Washington DC. later this month. The broke city will also provide food and free T-shirts
http://www.thegatewaypundit.com/2018/03/baltimore-mayor-will-send-60-buses-kids-march-guns-dc-free-food-t-shirts/

CBS Urges Oprah: Run Against Trump Because You ‘Heal and Connect All People’
“Nobody should be convinced to run for the presidency, but I also think you have a very unique ability in terms of healing and connecting all people.”

BITCH, PLEASE
NOTICE HER BESTIE GAYLE KING STARING LOVINGLY AT HER
Co-host Gayle King — who can be forgiven for her bias due to being Winfrey’s best friend — told the media mogul:
“Nobody should be convinced to run for the presidency, but I also think you have a very unique ability in terms of healing and connecting all people.”
Not so humbly, Oprah affirmed:
“I have great compassion for people. I do that.”
As part of her pitch, King referenced the late poet Maya Angelou:
“What do you think Maya would say? It’s one of these times I really wish Maya was here. What do you think she would say? You would certainly ask her.”
https://www.truthrevolt.org/news/cbs-urges-oprah-run-against-trump-because-you-heal-and-connect-all-people

Joe Biden: Some Democrats Don’t Get The Working Class Anymore, “It Makes Me Angry”
THIS JERKOFF HAS COLLECTED A GOVERNMENT CHECK HIS ENTIRE LIFE.
I THINK HE EXPECTS TO RUN IN 2020 AND DO WHAT HILLARY COULDN’T… GOOD LUCK WITH THAT

THESE PEOPLE ARE BEYOND PATHETIC
USING A 2 YEAR OLD AS A SHILL
The Post headline on Wednesday was “Obama meets girl who was captivated by her portrait. And then they dance.” Two-year-old Parker Curry and her mother Jessica appeared on Tuesday’s CNN Tonight, where anchorman Don Lemon went Full Gush: “That photo of her being awestruck bit portrait of the former first lady, I mean it went viral. Look at that. She is like — she’s caught up in the rapture, right?”
https://www.newsbusters.org/blogs/nb/tim-graham/2018/03/07/cnn-host-debates-two-year-old-michelle-obama-queen-or-superhero

NY Gov.: When you die and go to heaven God asks, ‘Have you been a good progressive?’
I DOUBT YOU’LL HAVE TO WORRY ABOUT THAT, CHAMP
The Democratic Party may not need God in their platform, but according to New York Governor Andrew Cuomo, progressives are literally on the side of the angels.

“I believe when you go to the Pearly Gates and our Lord says, ‘Have you been a good progressive?’ He says, ‘Show me the list of what you got done,’” Cuomo said.
“And I have accomplished more progressive results in this state than have been accomplished by any administration and I believe that is factually, objectively irrefutable,” he added.
http://www.bizpacreview.com/2018/03/07/ny-gov-when-you-die-and-go-to-heaven-god-asks-have-you-been-a-good-progressive-611127#