This used to be a big deal. I remember my grandmother watching to see all the gowns the Hollywood elite wore (and often make snide comments about them looking like “a saddle on a sow”…extra grannyism there), or some such offhand snarkiness. Personally, I quit going to movies about the time the outdoor theaters disappeared.
Since the rise of the internet, which gave educated people the ability to express conservative ideas heretofore censored, the discourse has coarsened to the point where so-called “beautiful people” have taken upon themselves to become the arbiters of our morality. The Academy Awards have degenerated into an orgy of self-congratulatory egoists slapping each other on the back, thanking all the ‘little people’ and copping clandestine feels before the “#me too” nonsense was brought belatedly to light.
You know well beforehand that these clowns who make millions playing pretend cannot resist berating this president and all the things most of us hold dear, like the Constitution. I never watch this republican bash-a-thon and doubt any of the few who come by here do either.

“Can you believe the Oscars is this Sunday?” a top agent told Steigrad. “It’s like, who cares?”
While there’s always a sense of awards season fatigue following the Golden Globes, this year has a slate of smaller, less flashy movies nominated, with no big stars expected to take home the golden statuette.
“There are no movie stars [expected to win] this year,” the agent added.
https://nypost.com/2018/03/03/oscar-weekend-kicks-off-without-celebratory-spirit/

Yeah, Here’s Another Reason Why Conservatives Should Just Should Turn Off The Oscars Tonight 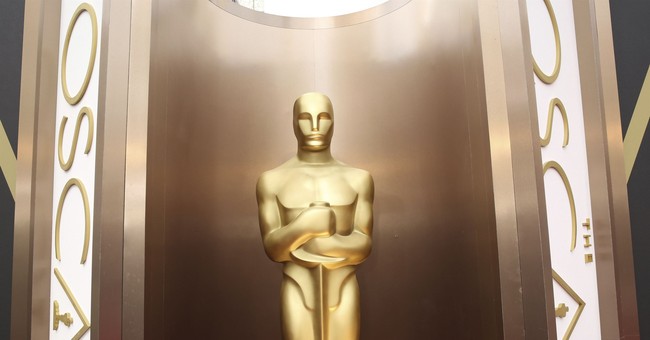 Yet, in the age of Trump, you can expect the bashing of our president to occur tonight. You can also expect swipes at those who are not in this club—Republicans, rural voters, people from small towns—to be ridiculed. Oh, and I forgot, there’s going to be pro-gun control pins that celebrities are expected to wear, according to reports. Nothing is confirmed, but this wouldn’t shock me.
https://townhall.com/tipsheet/mattvespa/2018/03/04/yeah-heres-another-reason-why-conservatives-should-just-should-turn-off-the-osc-n2457238

Michael Bloomberg’s New York-based gun-control advocacy group Everytown for Gun Safety has created an anti-gun-violence pin for celebrities to wear to the Oscars on Sunday, sources tell The Hollywood Reporter.
Since the Parkland, Florida, high school massacre that left 17 dead last month, thousands of young people have called upon the organization to support their efforts to advocate for more stringent gun-control laws and other public-safety issues.
https://www.hollywoodreporter.com/news/stars-wear-anti-gun-violence-pins-at-oscars-sources-say-1089937

Can Time’s Up Avoid Protest Fatigue at the Oscars?

In several decades of researching social change, I have never seen a social movement arise as quickly and spread as widely as the #MeToo campaign against sexual assault and harassment. But like all contemporary protests, supporters face the difficulty of sustaining momentum in the face of a public whose attention span seldom lasts beyond a single news cycle.
In approaching the Academy Awards ceremony on Sunday, activists face a problem scholars call “protest fatigue.” People tend to grow weary of repeated protests unless there is something novel about them. Movements that were once energetic and fresh find themselves under a great deal of pressure to top their previous efforts.
http://www.msn.com/en-us/movies/oscars/commentary-can-times-up-avoid-protest-fatigue-at-the-oscars/ar-BBJQUiO?li=BBxU6kX&ocid=UE12DHP

Jimmy Kimmel Says ‘It’s Almost Necessary Now’ to Trash Trump: ‘I Don’t Think You Can Go too Far’
THIS IS THE CHUMP WHO HOSTED A SHOW FEATURING GIRLS ON TRAMPOLINES, GUZZLING BEER AND PLAYING “GUESS WHAT’S IN MY PANTS.”
YEAH, HE CAN’T GO TOO FAR.
“I don’t think you can go too far,” Kimmel says of his politically charged rhetoric. “I’m still doing a comedy show and I need to be funny and entertain my audience, but I also think that we’ve matured enough … to the point where we can accept late-night talk show hosts speaking about a serious subject. And I think that it’s almost necessary now.”