The #2 man at the FBI, Andrew McCabe was pushed out/resigned/terminated yesterday. The fact is he was placed on ‘permanent leave of absence’ until March when he can retire with full benefits… to the tune of $1.8 million. He will likely then get a six-figure job as a lobbyist on J Street where old politicians go to continue raking in big money. Congress voted to release the FISA memo, which will once again demonstrate how dirty and morally bankrupt the Democrats are and how deeply the system has been corrupted. Despite all the sh*tstorm, I still maintain nobody of any import is going to jail.

Andrew McCabe’s Pension Is Worth About $1.8 Million

THERE HAS NEVER BEEN AN ADMINISTRATION WITH SO MANY OPERATIVES ON THE INSIDE WORKING TO BRING IT DOWN.

It appears McCabe is the first victim of the FISA MEMO.

The swamp immediately struck back. The new Acting Deputy Director of the FBI replacing Andrew McCabe, David Bowdich worked under Comey. In fact, he may be a witness in the ‘Trump-Russia’ investigation because Comey had a conversation with him about Trump asking the former FBI Director to supposedly ‘back off its probe into General Flynn’.

Even worse, Bowdich was involved in the Clinton-Lynch tarmac meeting conversations with Comey as they scrambled to hide the scandalous meeting from the public.

IT’S SO SAD THAT RACE BAITING IS ALL THEY HAVE

“Let me just say what I said last night: that plan is a campaign to make America white again,” Pelosi said, claiming that the proposal will cut legal immigration by 50 percent…
In her remarks, Pelosi thanked mayors across the country for their “courage” in overseeing sanctuary cities, jurisdictions that do not fully cooperate with federal immigration authorities.

MANCHIN IS THE MOST ENDANGERED DEMOCRAT IN THE SENATE. HE’S TRYING DESPERATELY TO SOUND LIKE A MODERATE TO SAVE HIS JOB. IT’S ALL AN ACT.

“You know what? We don’t need that type of rhetoric on either side,” Manchin told CNN’s Jake Tapper on State of the Union. Asked whether that meant he “condemned” Pelosi’s remark, Manchin replied that his criticism would apply to both sides: “I’m condemning all this crazy rhetoric that goes on. Just because someone’s a Republican — it’s not my enemy. And we have to work together.”

THERE IS ABSOLUTELY NOTHING DEMOCRATIC ABOUT THE DEMOCRAT PARTY.

Reid was at it again on her MSNBC show this morning. This time, the target of her ire was Jason Johnson, former chief strategist to Sen. Ted Cruz. When Johnson committed the unforgivable sin of twice referring to the “Democrat” party, Reid interrupted:

“You’re new to our show, but we say ‘Democratic’ party here.”

[CtH: Joy, honey, I go out of my way to use “Democrat Party.” I know it’s wrong and everybody who reads me regularly knows I’m a grammar nazi, so yes, it is meant to be a subtle insult.  But given that you and your ilk regularly disrespect me and my “pro-life” peeps by using “pro-abortion”, I can’t say as I give a flippin’ finger what you think about it.]

I DIDN’T BOTHER TO POST ANYTHING ABOUT THE GRAMMYS FOR A REASON; I JUST DON’T CARE.

BRUNO MARS WON 7 AWARDS AND THE INSUFFERABLE JAY-Z, OBAMA’S HOMEBOY, WAS NOMINATED FOR 7 AWARDS AND DIDN’T WIN A DAMN THING. THAT DIDN’T STOP HIS JACKASSERY.

Trump must not have watched the interview because, as Jones noted on Twitter, he actually broached that very topic. “[Trump] is somebody who’s now saying, ‘Look, I’m dropping black unemployment. Black people are doing well under my administration.’”

Jones said. “Does he have a point? … Maybe he’s going to say terrible things but put money in our pocket; does that make him a good leader?”

“No,” JAY-Z replied. “It’s not about money at the end of the day. Money doesn’t equate to happiness, it doesn’t. That’s missing the whole point. You treat people like human beings.”

Flashback Trump on the campaign trail: My crowds are far bigger than foul-mouthed JayZ

DIAMOND AND SILK ALWAYS HAVE AN OPINION

The Two Republicans Who Voted Against The 20-Week Abortion Ban

I GET SO TIRED OF THESE TWO.

The Senate voted 51-46 in favor of the Pain Capable Unborn Child Protection Act, which was short of the 60 votes required to proceed to a final vote under current Senate rules.

Republican Sens. Lisa Murkowski of Alaska and Susan Collins of Maine both voted against the bill, which would have prohibited abortions on unborn babies after 20 weeks, the age at which they can feel pain, with exceptions in cases rape, incest or to save the life of the mother.

[CtH: These two always vote pro-abortion, but there are 2 or 3 Democrats who are strong on our side.  If they change the Senate’s rules, this could pass.  Planned Parenthood will instantly challenge it in the courts, so it won’t save many lives right away, but it will move the issue back to the SCOTUS docket eventually.  A large majority of Americans favor it and Ginsburg is older than dirt, so we can pray with realistic hope.]

Hillary Clinton reads from ‘Fire and Fury’ at Grammys

CAN SOMEBODY PLEASE SHUT HER UP?

“He had a longtime fear of being poisoned, one reason why he liked to eat at McDonald’s — nobody knew he was coming and the food was safely premade,” the former Democratic presidential candidate read from the book, before Grammy host James Corden told her she had the award “in the bag.”

Along with Clinton, Corden’s bit of searching for the best narrator of Wolff’s book included Snoop Dogg, Cardi B, DJ Khaled and other stars. 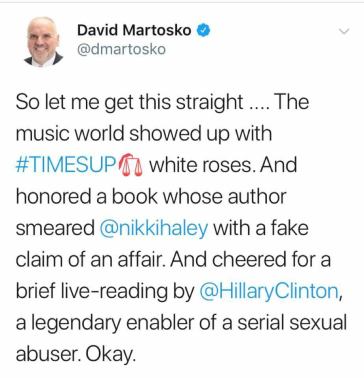 Nikki Haley derided the producers of Sunday night’s Grammy Awards for a segment that features Hillary Clinton reading ‘Fire and Fury’.  In the segment, Clinton had a giant grin as she read a passage about President Trump’s ‘longtime fear of being poisoned’

SHE ONLY SUPPORTS THE BITCHES HER HUBBY DIDN’T ASSAULT

[CtH: And the 12-year-old rape victims who weren’t stepping stones to be squashed to advance her career.]

12-Year-Old Being Honored By Trumps At SOTU For Placing U.S. Flags And Flowers At The Graves Of Veterans Since 2015 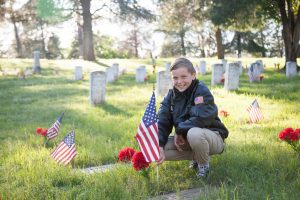 A 12-year-old Redding boy will be a guest Tuesday at President Donald Trump’s State of the Union speech.  Preston Sharp, who has won acclaim for placing U.S. flags and flowers at the graves of North State veterans since 2015, will be one of a number of presidential guests at Trump’s speech, the White House announced Monday.

He is attending the address at the invitation of Donald and Melania Trump and will sit in the House of Representatives gallery with the first lady during the speech, the White House said.

[CtH: Wow!  What a thrill for his whole family!]

SHE WAS SENTENCED TO FIVE YEARS…SHE’LL BE OUT IN TWO OR THREE AND WILL IMMEDIATELY GET RE-ELECTED.

The bus paused at the prison complex’s entrance and waited for Bishop Kelvin Cobaris to cross the highway and get on board.  Cobaris had parked across the street from the prison, awaiting Brown’s arrival. Cobaris, who is the president of the African American Council of Christian Clergy, described himself as Brown’s spiritual advisor.

It’s unlikely that we will be able to see Corrine Brown’s mug shot. Unlike county and state corrections facilities, federal prisons rarely release mug shots.  Brown will continue to collect her Congressional pension while she’s in prison until the appeals process has been exhausted. 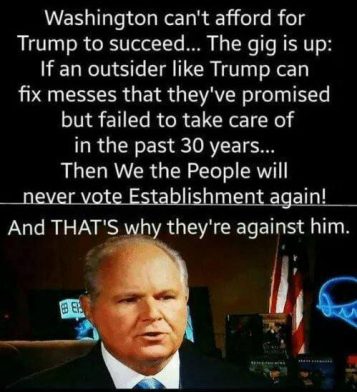 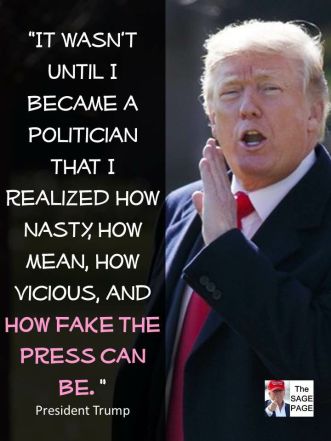 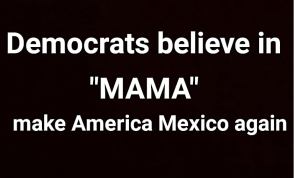 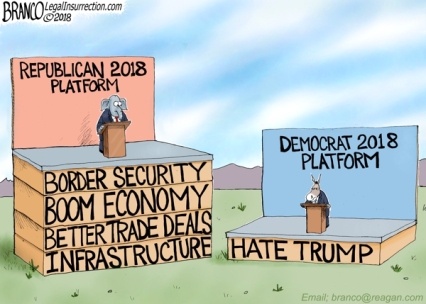 Comments Off on But Wait… There’s More!