Trump and the Davos Divas

Some love him, some hate him. Nothing new. He puts America first, something sorely lacking in the previous president.

Trump storms Davos: The President lands in Switzerland to defend his America First policy in a flurry of meetings with world leaders and billionaire CEOs

President Donald Trump has arrived to Switzerland to participate in the Davos economic conference.  Members of his cabinet arrived in advance and joined in panels and interviews.  He will push his ‘America First’ agenda and seek more fair, reciprocal trade between the US and its allies.

Trump met the British Prime Minister Theresa May after canceling a visit to the UK earlier this month.  The president and Prime Minster shook hands after reaffirming the ‘Special Relationship’ between the nations. Trump said that he would ‘fight’ for Britain and said that any rumors of a fracture in relations were false.

Met with Israeli Prime Minister Benjamin Netanyahu who thanked Trump for recognizing Jerusalem as capital.  He will also attend a reception the White House has said will be held in his honor and meets with CEOs.  Trump said before departing that he was ‘looking forward’ to speaking to special counsel Robert Mueller.

Reporters asked him what his message will be at Davos this year. The president answered, “Peace.” 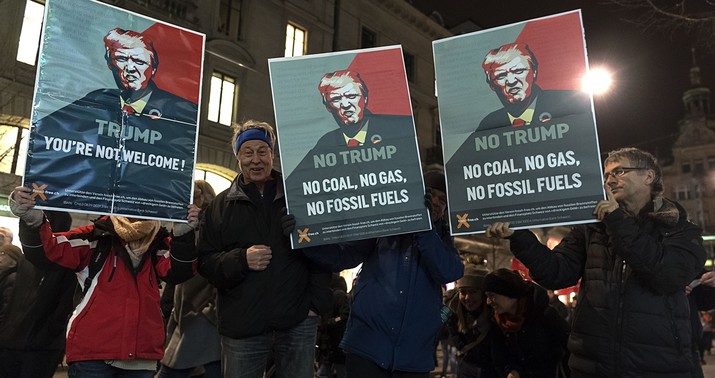 [CtH: Let’s all count the number of products in this photo that involved the use of fossil fuels to produce and transport.]

In fact, it might be news to Donald Trump’s political base, for which “globalist” has become an epithet to toss at domestic opponents. Yet the Washington Post reports that Trump and his economic team have started off the Swiss summit by emphasizing that they want the United States to keep its leadership on globalization and free trade.

“This is about an America first agenda, but America first does mean working with the rest of the world,” Treasury Secretary Steven Mnuchin said in a news conference Wednesday morning.  Gary Cohn, the head of Trump’s National Economic Council, put it this way: “America first is not America alone.”

African CEOs said they’d like Trump to acknowledge that he said something inappropriate, and say he’s sorry. “We’re only looking for that, just to apologize” said Luvuyo Rani, the CEO of Silulo Ulutho Technologies, a South African internet company. There’s no way Trump realizes the “damage” he’s caused, said Rani, who added he wasn’t sure whether he’d attend the speech or not.

[CtH: Is he supposed to apologize for Dick Durbin lying about what he said?]

The first American president to visit Davos since Bill Clinton in 2000 will address delegates in a much anticipated speech Friday, and is expected to stick to his America First rhetoric.

“(This trip) is about an America First agenda but America First does mean working with the rest of the world,” Treasury Secretary Steven Mnuchin said.

Morgan, who previously won the “Celebrity Apprentice,” will interview Trump during the World Economic Forum in Davos, Switzerland.  Morgan has in the past praised Trump. Last year, he said he genuinely liked Trump.

Trump Official Tells Critics at Davos: Those Who Do Not Want to Listen to Trump Can Leave

Transportation Secretary Elaine Chao arrived in Davos, Switzerland a day before President Trump’s arrival on Thursday.  During a breakout conference Chao told Trump critics if they did not want to listen to the American president they could leave.

But Chao defended his decision to attend, saying on Wednesday that the president was doing so in order to engage world leaders on issues of economic importance, Politico reported.

‘IN THE EVENT OF AN ERECTION LASTING MORE THAN FOUR HOURS’

One response to “Trump and the Davos Divas”