Comments Off on The John Paul II Cup

Comments Off on Obama Crime Spree

Comments Off on GOP: The TRULY Tolerant Party

FAKE NEWS: CNN’s Don Lemon is either stupid or a liar

In 2013, CNN’s Don Lemon reported on the government shut down.

On Friday, he said ON AIR that he didn’t remember the government shutting down when Obama was in office.

In 2014, Don Lemon was named in a list of worst journalists by the Columbia Journalism Review.  But hey, who cares?! He’s a black, gay leftist. That’s a trifecta for being a major news anchor at CNN these days. Intelligence and integrity never enter into it.

No commentary anymore. There’s no point.

They tried to shoehorn a big immigration amnesty into stopgap funding and paid a heavy price.

Democrats got essentially nothing in exchange for voting to re-open the government, which made the Republican triumph even sweeter. Senate Majority Leader Mitch McConnell (R-Ky.) made an unenforceable promise to Senate Minority Leader Chuck Schumer (D-N.Y.) to bring an immigration bill to the floor – he said merely that it was his intention to do so – if a compromise cannot be made regarding the illegals before government funding runs out again.
https://www.frontpagemag.com/fpm/269102/democrats-lose-big-time-shutdown-ends-matthew-vadum

This embarrassing game of Chicken shows that — for the first time in decades — a Republican won the Narrative War.
Republicans never win the Narrative War.
And that’s why Schumer and the Dems were so certain they’d succeed at hanging this shutdown around Donald Trump’s neck.
But they failed miserably.
No. Trump went much further than that. He successfully labeled this shutdown as Democrats choosing illegal aliens over American citizens.
And because of that, losing this game of Chicken isn’t just a minor setback for Chuck Schumer and the Democrats.
They went all-in for non-citizens over Americans. And now, no matter what they do, Trump has succeeded in labeling them the Party of Illegals.
http://patriotretort.com/never-play-chicken-trump-train/

In a campaign email, the message from the Trump campaign is that “Democrats CAVED”:

Democrats caved on the shutdown, and they’re admitting it

And here’s a statement from OFA, the political offshoot of Barack Obama’s presidential campaigns: “Let’s be clear: This stopgap measure is not a solution. It’s merely a band-aid for a self-inflicted wound that remains untreated.” Another liberal group, CREDO Action, offered this:

“This is a bad, outrageous deal. Trump and Republicans in Congress stood with their anti-immigrant nativist base, and too many Democrats backed down, abandoned Dreamers, and failed to fight for their values.”
Lotta anger out there!
https://hotair.com/archives/2018/01/22/fun-moveon-rips-dems-bad-outrageous-shutdown-deal/

We Are Outraged:’ Illegal Alien Activists Turn on Democrats After Amnesty-or-Shutdown Fail

In a protest outside of the U.S Capitol, open borders advocates and illegal alien activists slammed Democrats after they originally shut down the federal government to push amnesty for illegal aliens, but then caved to President Trump and voted to reopen the government without an amnesty attached to the funding bill.
Illegal aliens shielded from deportation by the President Obama-created Deferred Action for Childhood Arrivals (DACA) program with the open borders group “United We Dream,” which is funded by globalist billionaire George Soros, said they were entitled to an immediate amnesty before the federal government was reopened.
http://www.breitbart.com/big-government/2018/01/22/we-are-outraged-illegal-alien-activists-turn-on-democrats-after-amnesty-or-shutdown-fail/

Fresh Polling: Shutting Down Government Over DACA Was Not Good For Democrats 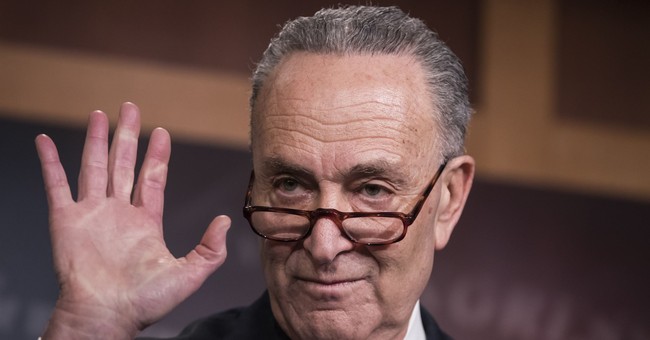 “Would you favor or oppose Democrats voting to shut the government down if the continuing budget resolution does not include restoring so-called DACA work permits for undocumented immigrants brought here illegally by their parents?”
58% responded with “oppose.”
Polling also showed a majority back White House priorities on ending the Diversity Visa Lottery Program, eliminating chain migration and building a border wall.
https://townhall.com/tipsheet/katiepavlich/2018/01/22/poll-vast-majority-disapprove-of-government-shutdown-over-daca-n2438002

Nancy Pelosi to Democrats: Shutdown deal does not ‘diminish our leverage’

“While today’s vote ends the Trump Shutdown, it does not diminish our leverage,” Pelosi said in a “Dear Democratic Colleague” note to her caucus members. “While Members may vote differently on this bill, we are unified in our determination to meet the needs of the American people with our Better Deal: Better Jobs, Better Wages, Better Future.”

[CtH: BWAHAHAHAHA!  Delusional Nancy opens her gob again.  TRUMP is MEETING every one of those needs already … without any support whatsoever from the Democrats OR the MSM.] 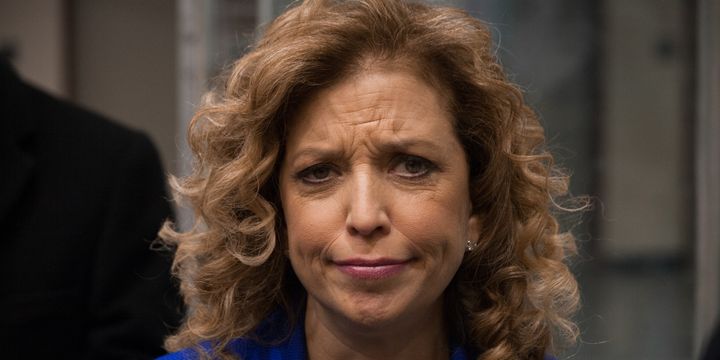 When Schultz was asked point-blank what the point of the government shutdown was her response left Baldwin’s jaw on the floor. “What one thing did [Schumer] get, you know, from Republicans, to justify shutting down the government in the first place?” Baldwin asked.
DWS replied: “The one thing, I would say, that [Schumer] did get is the potential for momentum.”

[CtH; What on Earth does “potential for momentum” mean?]

[DWS: “We’re five months down the road and we still don’t have a budget.”  Wow.  And how many YEARS did Democrats REFUSE to pass a budget?!  I’d say “unbelievable” but this is a Democrat.]

CNN’s John King: ‘Why Did They Shut Down the Government in the First Place?’

CBS on Democrats Ending Shutdown: ‘This Is a White House Victory’

Paul Ryan: ‘This Shutdown Did Not Need to Happen’

[CtH: In other words, the shut down was irresponsible. Well, duh.] 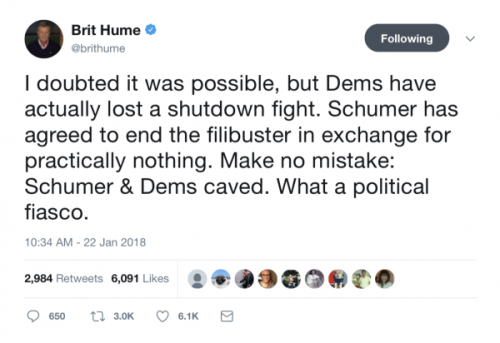 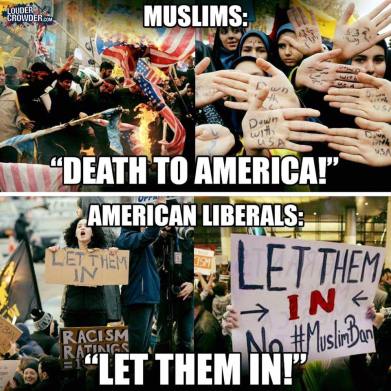