The Senate failed to pass a cloture vote on a House-passed continuing resolution late Friday evening, just before government funding levels were set to expire.

Democrats withheld their votes over a lack of an agreement on a legislative fix to the Deferred Action for Childhood Arrivals (DACA) program — the Obama-era initiative that extended temporary legal status to foreign nationals who illegally entered the country as minors — leaving GOP leadership short of the 60 votes needed to send the measure to the president’s desk.

The House budget resolution failed a cloture vote in the Senate on a largely party line vote, 50 to 49.

Tonight, on the eve of the first anniversary of his inauguration, President Trump earned an ‘F’ for failure in leadership.

“President Trump and Congressional Republicans’ obsession with passing a tax scam to benefit the wealthiest and corporations has blinded them to their responsibilities to the American people. Despite controlling the House, Senate and White House, the Republicans are so incompetent, so negligent that they couldn’t get it together to keep government open.

High profile national monuments and parks were “Barrycaded” so that TV cameras could show veterans and others being turned away. 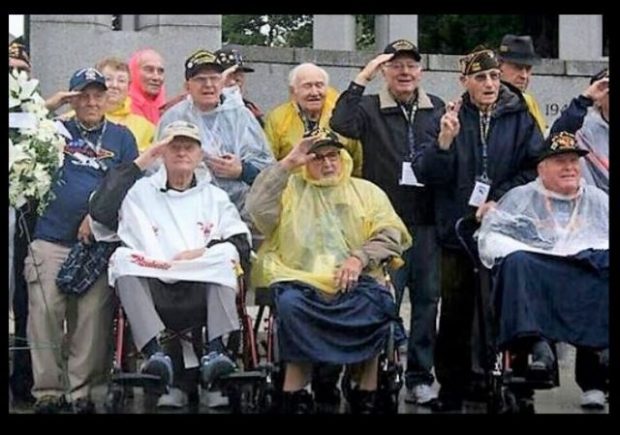 “I just want to let everybody know,” he said about the potential government shutdown:

“We do not want this, we do not want a shutdown, but if Mr. Schumer insists on it, he is in a position to force this on the American people.”

Jim Acosta of CNN embarrassed himself by suggesting Republicans could avoid a shutdown because they control the House, Senate and Presidency. He knew, of course, that 60 votes are needed in the Senate.

Democrats have a) have longed called government shutdowns irresponsible, directing their attacks at Republicans; b) they’ve said that tying immigration to budgetary matters is just an exercise in chaos. Sen. Chuck Schumer (D-NY) said that in 2013 during the debt ceiling negotiations. The latter is the audible here. Democrats want a DACA deal first. It’s dealing with greedy, spoiled children when it comes to the Democrats. They’re getting everything they want.

McConnell on Senate Floor: This Government Shutdown Was 100 Percent Avoidable

“A government shutdown was 100 percent avoidable. Completely avoidable. Now it is imminent,” Senate Majority Leader Mitch McConnell said on the Senate floor following the vote. “Perhaps across the aisle some of our Democratic colleagues are feeling proud of themselves, but what has their filibuster accomplished? . . . The answer is simple: Their very own government shutdown.”

The government shut down over Democrats pushing for DACA.

HOUSTON, TX—A rich young ruler looking for salvation was proud to announce Wednesday that he finally found a place to call home at Lakewood Church.

Calling the revelation “powerful” and “moving,” the wealthy, powerful lover of money said he knew Lakewood Church was the place for him after his lifestyle was affirmed and praised by lead pastor and famous author Joel Osteen.

“This place just makes me feel so comfortable,” the man told reporters. “I came in and told Pastor Joel I was a good person and had kept all the commandments from my youth, and asked him what I still lacked—and do you know what he said? He told me I didn’t lack anything, that I was great just the way I am.”

The young man further stated that other churches had tried to confront his love of money and challenged him to make Jesus his first priority, and that he had just gone away sad.

“That’s not what Jesus would have done,” he said confidently.

The Left Has Gone Over the Cliff

It has been bizarre to watch the transgender activists face off with the feminists, who are realizing that feminism is essentially an outdated dogma in a world where men can become women on a whim—and even win female awards, indicating that they are better at being women than biological women.

This face-off has even turned physical in a few instances, such as when trans activists and radical feminists brawled in London’s Hyde Park last fall. More recently in Canada, feminists were outraged when a male-born trans woman was elected leader of Quebec’s largest women’s rights group. …

“Today I’m honored and really proud to be the first president to stand with you here at the White House to address the 45th March for Life, that’s very very special, 45th March for Life, and this is a truly remarkable group. Today tens of thousands of families, students, and patriots, and really just great citizens gather here in our nation’s Capitol. …

“Because of you, tens of thousands of Americans have been born and reached their full God-given potential. …

“As you all know Roe versus Wade has resulted in some of the most permissive abortion laws anywhere in the world. For example, in the United States, it’s one of only seven countries to allow elective late-term abortions along with China North Korea and others. …

“Only 12% of Americans support abortion on demand at any time.”

Yesterday, the House of Representatives voted to approve the Born Alive Abortion Survivors Protection Act — legislation protecting babies who survive abortions. Trump said he’d sign it, so it’s up to the Senate now.

In a major decision yesterday, President Donald Trump made it easier for states to defund the Planned Parenthood abortion business by rescinding an Obama-era Medicaid guideline that limited the way states could take action against Planned Parenthood.

Wow! Among the March for Life Rally speakers this year was Republican Congresswoman Jaime Herrera Beutler of Washington, who was told her unborn daughter had no kidneys. The doctors recommended abortion, but the Beutlers said no. Thanks to an experimental treatment, Abigail was the first child born without kidneys who was able to breathe on her own. Her dad later gave his daughter one of his kidneys and she is now a healthy 4 year old!

Comments Off on Trump’s Speech for Pro-Life Marchers

Investigative reporter Sara Carter said the FISA memo is so explosive it could end Mueller’s investigation.

Hillary Clinton is in the middle of this, because her campaign paid for the phony Russia dossier which was then used to obtain a FISA warrant to spy on her political opponent, then-candidate Donald Trump.

GOP Reps are demanding the memo be made public because Americans deserve to know just how involved Hillary Clinton was with the FBI during the 2016 presidential election.

Sean Hannity: Based on today’s events I have a message tonight for Special Counsel Robert Mueller. Your witch hunt is now over. Time to close the doors…

RACIST that Jesse Jackson thanked him for a lifetime of service to African Americans in 1998.

ANTI-IMMIGRANT that he received the Ellis Island Medal of Honor in celebration of “patriotism, tolerance, brotherhood and diversity” in 1986.

ANTI-MUSLIM that he received Saudi Arabia Collar of Abdulaziz al Saud from Saudi Arabia in 2017 and a Bravery Medal from the Afghan people in 2018.

Did you catch the LANGUAGE coming from that television news anchor?! “G*d damn F*** are you sh***ing me?” Yeah, and these are the SAME people who are so WEEPY, WAILING DISTRESSED about Trump MAYBE having said “sh**hole.” Hypocrites.