Been spending most of my days sleeping. Thought I’d clear some things out before I take another nap. Did I mention that retirement has its good points?

As Coney Island neighbors and the rest of the city struggled with the massive 2012 devastation, Harris lined her pockets with cash meant to aid the hurricane’s newly homeless, a federal indictment charges.

Harris spent $10,000 on vacations, including a cruise ship getaway, and shopped at Victoria’s Secret with her dirty money, authorities charged Tuesday.

And she allegedly urged witnesses to lie to the FBI in a failed cover-up of her crimes.
Harris looted some $60,000 in state and federal funds in several scams, including Federal Emergency Management Agency money for “temporary housing assistance” after the hurricane, officials charged.

Harris, 57, is a former correction officer and previously served as head of a Coney Island non-profit. She was accused of stealing $34,000 in cash provided by the City Council to pay rent for her group.

Many people still foolishly blame things like lightning strikes, tornadoes, tsunamis and hurricanes on the random vagaries of fate or simply describe them as acts of God. But not the intrepid Mayor of New York City, who apparently also doubles as a sleuth in his spare time. He’s been investigating the aftermath of Hurricane Sandy for half a decade now, seeking out the cause of the storm. And now he’s cracked the case, determining that the lethal storm which wrecked large parts of the northeast was caused by a coalition of five energy companies. And by God, he’s suing them over it.

Report: Frustrated Trump asks senators, why are we letting people in from “sh*thole countries”?

“Why are we having all these people from shithole countries come here?” Trump said, according to these people, referring to African countries and Haiti. He then suggested that the United States should instead bring more people from countries like Norway, whose prime minister he met yesterday.

And just an fyi, notice the source: a Democratic aide who wasn’t even in the meeting.
Three guesses that this gets pulled back or the real story comes out later. But in the meantime, they’ll spread the ‘source’ said story.

CNN Goes Off on a Sh*thole Sh*tstorm: Mentions “Sh*thole” at least 36 Times in One Night

On Thursday afternoon President Donald Trump asked a group of pro-amnesty senators why the US should welcome migrants from “sh*tholes” like Haiti, Central America or African nations.

It was a good question.

The hosts and contributors on CNN went on a sh*thole sh*tstorm last night.  The word “sh*thole” was mentioned at least 36 times on CNN on Thursday

Flake is an anti-Trump pro-amnesty Republican.  He is not running for reelection this year in Arizona.

WHY IS HE STILL HERE?

Rep. Jackie Speier (D-CA), along with the Democratic Women’s Working Group, is calling on the men and women in Congress to wear black to President Trump’s upcoming State of the Union address in solidarity with the #TimesUp and #MeToo movements against sexual harassment.

[CtH: I’d be more impressed if they wore black to protest all the lives that have been damaged and destroyed by perps forcing abortions on their victims to cover up sex crimes.]

Dems Admit They Need Illegals For Their Votes

Leaked memo reveals they are fighting to make the DREAMer nightmare permanent.

Republicans may not be angels but they have never wielded compassion as a cudgel the way Democrats do. But this memo ought to end Democrats’ phony compassion shtick for all time. Power is the only thing that matters to them. They don’t care about America or Americans. They care only about winning. Honest observers have known this for years.
What did Democrats actually do this time to help solidify their image as the party of power over principle?

Democrats can’t win elections without cheating. They pushed the 1993 Motor-Voter law to make voter fraud easy to commit and difficult to prosecute. They oppose voter ID laws tooth-and-nail for the same reason. They changed immigration laws a long time ago so they could change the electorate by importing new voters.

Pelosi: Dems Will Use MLK Day to Organize ‘Teach-Ins’ on GOP ‘Tax Scam’

THIS IS THE ONE DAY A YEAR THESE HYPOCRITICAL PRICKS USE DR. KING TO SUCK UP TO THEIR IGNORANT STEEPLE. THE REST OF THE YEAR EVERYTHING THEY DO IS 180 DEGREES OUT OF PHASE WITH EVERYTHING HE STOOD FOR.

Don Lemon: Trump Is a Racist

[CtH: Except for the part where he isn’t.  And, oh by the way, blacks and Hispanics currently have the lowest unemployment in recorded history … though, I suppose in Nancy Pelosi’s scrambled noggin, is proof positive that Trump is racist.]

Nancy Pelosi Scoffs At ‘Crumb’ Bonuses By U.S. Companies As A Result Of Tax Cuts

“In terms of the bonus that corporate America received versus the crumbs that they are giving workers to kind of put the schmooze on is so pathetic. It’s so pathetic,” the California Democrat said.

THEY MAY BE “CRUMBS TO A MULTI MILLIONAIRE, BUT A FEW THOUSAND DOLLARS TO HELP MAKE ENDS MEET IS NOT INSIGNIFICANT TO WORKING PEOPLE.

[CtH: I still remember when Michelle Obama sneered at Bush’s $600 tax rebates saying, “What can you do with $600? You buy one pair of earrings and it’s gone.”]

Report: Over 300 Labor Union Offices Have Embezzled Money Across The Country 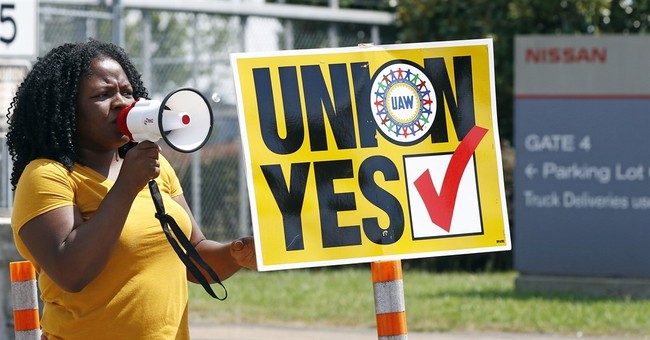 The Detroit Free Press obtained documents from the Department of Labor that in the past two years, over 300 labor union chapters have detected fraud. Two cases with the United Auto Workers Union in Michigan and New Jersey had embezzling episodes that soared over $1 million. The Free Press added that at times, some people who have been tasked with looking after the books were simply not qualified for the job, some cases they were headed up by people who couldn’t balance their own checkbook.

Comments Off on Holder’s Hypocrisy

A couple of days ago, there was a brouhaha about “gender pay inequality” in Hollywood.

It seems that Ridley Scott’s, All the Money in the World, had to be hastily reshot after disgraced Kevin Spacey was replaced in the role of billionaire J. Paul Getty.

Except, whoops. It turns out the “gender” pay gap was actually a “better contract for a bigger star” pay gap.  Wahl’s contract got him big bucks for reshoots. William’s contract only got her the standard $80 per diem.

ECONOMY: The Bureau of Labor Statistics released its newest jobs report on Friday, and the data clearly show, under the pro-business policies implemented by the Trump administration, low-income and working-class families are enjoying significant economic gains not experienced in nearly 20 years.

TAX OVERHAUL: Wal-Mart, the nation’s largest private employer, announced today that it will raise its starting hourly wage, give bonuses to all eligible full and part-time associates, and expand its parental leave policy—all in response to last month’s tax overhaul.

2020 ELECTIONS: The Senate map is really tough for Democrats, with 26 Democratic seats in play next year (including a newly opened seat in Minnesota after Al Franken announced his intention to retire) as compared to just eight Republican ones. Moreover, five of the Democratic-held seats — the ones in West Virginia, North Dakota, Montana, Missouri and Indiana — are in states that President Trump won by 18 percentage points or more.

PRO-LIFE: Speaker Paul Ryan will headline the 45th March for Life, which is taking place on January 19th.  Paul Ryan has spoken at the annual event before, but this will be his first time coming as Speaker of the House.

RUSSIARUSSIARUSSIA: The salacious and FAKE anti-Trump dossier that Hillary paid for was used to gain approval from a secret court to monitor members of Trump’s team. There will be more information in the coming week.

RAAACISM: Clarence Thomas talks about being a black conservative in modern society.  He says faith gives him “the strength to do what I have to do every day, to assert the independence, to be willing to take the beatings, the criticism, the unfairness.” When he attends daily mass, he says, it helps him do his “job, a secular job, in the right way and for the right reasons.” It reminds him that his work has nothing to do with what is said about him, but is rather about doing what he took an oath to do.

Jim Acosta: There’s folks out there who’ve said there’s a cause and effect out there. He watches something on FOX and Friends and then he tweets about it. Is that what happened this morning and does that go on?

Jim Acosta: I think he’s watching a lot of CNN if you don’t mind me saying.

Sarah Huckabee Sanders: I don’t think that’s true. I think your numbers would be higher.