On Thursday, the Federal Communications Commission voted to repeal the Obama-era net neutrality rules that imposed greater regulation over the internet.

No big surprise, the vote was along party lines, with Democrats favoring the FCC’s 2015 heavy-handed, utility-style regulation of broadband internet access service and Republicans favoring returning to the traditional light-touch framework that was in place until 2015.

The 2015 regulations led to regulatory uncertainty and less investment in broadband, plus hampered innovation among smaller ISPs in rural areas.

The military’s biggest raise in 8 years 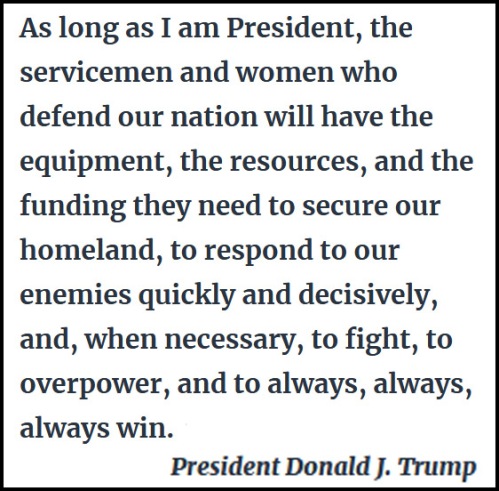 President Donald J. Trump has signed the National Defense Authorization Act for fiscal year 2018, which approves one of the largest defense spending increases since the Reagan presidency to help rebuild America’s Armed Forces.

Here is a quick list of what the NDAA does for America’s military:

Read more about it here:

MENLO PARK, CA—Tech titan Mark Zuckerberg, CEO of Facebook, came out strongly against the repeal of net neutrality Friday, calling the rollback of the Obama-era regulation an “injustice.”

“Internet Service Providers should not be able to decide what people can see online,” the man who decides what two billion people can see online every day said in a Facebook video that was placed in front of the precise amount of people he wished. “It’s a violation of a free and open internet.”

“Furthermore, ISPs should not be able to charge more for certain content,” Zuckerberg intoned, though part of his $523 billion company’s revenue comes from throttling the reach of publishers’ content unless the publisher pays Facebook to show their content to people who signed up to see it anyway.

The boss of the largest social network in the world, which is widely known to smother or close down conservative pages for violating what it calls its community guidelines, stressed that the fight for net neutrality is not over. “We’re ready to work with members of Congress and others to help make the internet free and open for everyone.”

“All content should be treated equally,” he added, the slightest hint of a grin curling up the side of his mouth as the video ended.