NEW YORK, NY—New projections worked up by the New York Times in conjunction with liberal think tank Progress At All Costs suggest that the new Republican tax plan will kill up to 18 billion people out of the 7.4 billion people currently living on the planet.

The Times published its findings on Monday, sounding the alarm that the adjusted tax plan will mean certain death for everybody on the planet “and then some.”

“We’ve run the numbers, and the tweaks to the current tax code will definitely kill everyone at least twice,” the Times wrote in its grave prediction. “Even those living outside the U.S. will be slaughtered by a ripple effect generated by the shuffling around of the current tax system, as minor as the adjustments may seem to some.”

“This is the end of humanity,” the Times article concluded ominously.

The detailed report suggested that the government taking slightly less money from the citizens of the U.S. would have detrimental effects, causing everything from volcanic eruptions and destructive tidal waves to a catastrophic, intergalactic invasion from aliens who feed on all organic life.

Don’t hold your breath waiting on the Left Stream Media to trumpet this news. It might make Presidents Bush and Trump look good. Can’t have that!

President Trump proclaimed December 1, 2017, as World AIDS Day, a moment to “honor those who have lost their lives to AIDS [and] celebrate the remarkable progress we have made in combatting this disease.”

Comments Off on World AIDS Day and PEPFAR Success

President Trump’s order seeks to end past overreach and abuse of the monument review process under the Antiquities Act that has closed off land to the public, while continuing to protect objects of significance.

As usual, there’s plenty of misinformation making the rounds. Here are a few quick facts to correct the record:

Myth: No president has ever shrunk a monument.

Myth: This move will sell or close national parks.

Myth: The review was done behind closed doors.

Read about Trump’s order for yourself:

Can’t Think of a Catchy Title

Oh, well, you can’t expect brilliance every day. Or every other day. Once a month is pushing it.

Conyers Retiring, Announces Who He Wants to Replace Him
Rep. John Conyers (D-MI) is retiring from Congress, he told a Detroit radio station Tuesday. Furthermore, he is endorsing his son, John Conyers III, to replace him.
https://townhall.com/tipsheet/cortneyobrien/2017/12/05/john-conyers-endorsing-his-son-to-replace-him-in-congress-n2418355

THIS HIS HIS KID, JOHN CONYERS III:

In a now deleted tweet from June 9th, 2010, John Conyers III (who has since deleted his Twitter account), appears to have been making reference to his father’s infidelity.
“My dad is a f*cking player and reckless as hell! He just got at this doods wife super low-key.”
http://www.thegatewaypundit.com/2017/12/dad-fcking-player-rep-john-conyers-sons-deleted-tweet-resurfaces-endorsement/

John Conyers III., the son and appointed successor of John Conyers’ Jr., the disgraced Democratic politician who announced his resignation on Tuesday, is a former attempted rapper who bragged that his friends are drug dealers and his dad “is a f***ing player.”
The son’s brief rap career included lyrical gems such as “My n***as turn grams into grands” and “Ay f**k making a living bro, I’m trying to make history/So picture me letting the news nit-pick at me.”

The Earldom Of Detroit Has Been Saved

Oregon Muse via Ace Of Spades opined:  “So that withered old crone Cokie Roberts now admits that ‘everyone knew’ not to get into an elevator with Democratic Rep John Conyers because of his gropey, gropey hands. She never raised a complaint about it, though. However, she did spend most of the 1990s winking at and excusing Bill Clinton’s horndoggery, while slamming Republicans for being sexist and ‘against women’. Ouch. Just thinking about the immense amount of effort it must have taken her to square all of those circles makes my brain hurt.”

Has a suitable heir been found? Conyers’ great-nephew, Michigan State Senator Ian Conyers, is set to run for his seat. It seems the feudal lords of Detroit still have the rights of prima nocta.
http://politicalclownparade.blogspot.com/2017/12/the-earldom-of-detroit-has-been-saved.html

Lord Conyers, the Earl of Detroit, bequeaths his peerage to his son

He and his family will continue to live large off of the Federal Government – and by extension the American taxpayer.
This kind of stuff absolutely sickens me.
Lord Conyers really does believe that he and his family are entitled to hold this seat for as long as they choose.
And what’s truly pathetic is the serfs in Detroit will happily play along with his sense of entitlement.
http://patriotretort.com/lord-conyers-earl-detroit-bequeaths-peerage-son/ Rep. Al Green (D-Tex.) said in a memo to fellow lawmakers that he planned to bring articles of impeachment to the House floor Wednesday as a “privileged resolution,” one that would be entitled to a vote within two days under House rules.
https://www.washingtonpost.com/news/powerpost/wp/2017/12/05/democratic-rep-al-green-says-he-will-force-house-impeachment-vote/?utm_term=.bd547b3abb91

Roy Moore: ‘We’ve Got to Go Back to God’ to Save Our Country

THIS IS PRECISELY WHY THE SWAMP WANTS NO PART OF HIM.
YOU CAN’T ALWAYS GET WHAT YOU WANT. –Mick Jagger

Moore campaigned with Bannon in the same barn as during the Republican primary, when he was locked in a battle against the establishment. A bluegrass band opened up the rally, where Moore supporters gathered at the close of a grueling campaign.
The former judge quoted Ephesians 6, reminding voters that they were fighting a spiritual battle against the forces of evil, urging them to “take up the armor of God.”
http://www.breitbart.com/big-government/2017/12/05/roy-moore-weve-got-to-go-back-to-god-to-save-our-country/

THE RACE BAITERS ARE IN A SNIT ABOUT THE PRESIDENT GOING TO A CIVIL RIGHTS MUSEUM.  THE TRUTH IS HE’S DONE MORE TO LIFT BLACKS OUT OF POVERTY THAN ALL THEIR BLOVIATING AND PHONY OUTRAGE.

Sarah Sanders announced during the White House press briefing Tuesday that President Trump would visit Mississippi this weekend. On his trip, Trump will participate in the grand opening of the Mississippi Civil Rights Museum.
Sanders was asked later in the briefing if Trump’s visit to the civil rights museum was a good idea. American Urban Radio reporter April Ryan asked about various members of the NAACP and black ministers who are protesting the visit.
“There are comments from people from the NAACP from black ministers who are planning on protesting and boycotting this weekend for the president’s visit to the Civil Rights Museum. What say you?” Ryan asked.

WHY DOES THAT RACIST PIG STILL HAVE HER CREDENTIAL?

WAAHHHH!!  THE PRESIDENT WON’T LET US SCREW HIM OVER ON A DAILY BASIS!

“The briefing is just unrecognizable from the days when it was a very useful tool,” said Ann Compton, a former ABC News correspondent who covered seven presidents over a 40-year span from Gerald Ford to Barack Obama.
Concern over the demise of the briefing began before Trump was elected, part of a general concern about administrations trying to bypass the news media. President Obama, for example, drew criticism when he hired an official videographer who reporters feared might substitute for news cameras.

They are plotting right now, mark my words, to bring down this administration.
‘Robert Mueller should not be called Special Counsel, he should be called ‘Special Impeachment Counsel’ Mark Levin says.

Some of the top replies to the senator’s original tweet are from former followers who deliberately decided to unfollow, citing reasons largely connected to the GOP tax bill.
“Since you choose to care about only yourself and wealthy friends I chose to unfollow,” wrote one woman.
http://thehill.com/blogs/ballot-box/363324-mccain-loses-20000-twitter-followers-in-a-day-after-asking-for-more

Score One for the “Compassionate Pro-Woman” Team

Watch a pro-abort smack a 15-year-old girl in the face for praying outside of the Roanoke Planned Parenthood.

Comments Off on 83% drop in refugee admissions

The Buzzers went to a wonderful, community-wide display of nativity sets. There were so many, they were able to divide them up by themes. Here’s just a taste of all that they saw.

I think my favorite was the all white room, with birch logs used for display. Beautiful!

Comments Off on Mascot Update: Preparing for the Christ Child

Rejoice, O Israel — You have a Champion

President Donald Trump will announce Wednesday that the United States recognizes Jerusalem as the capital of Israel, and that the State Department will begin a process to move the U.S. embassy in Israel to Jerusalem.

The officials conveyed that the change is a recognition of “reality” — both the historic reality that Jerusalem has been the capital of the Jewish people and the Jewish faith since ancient times; and the modern reality that the city is the seat of government for Israel, housing its legislature, supreme court, prime minister, and executive agencies.

Presidents have long hesitated to recognize Jerusalem as the capital of Israel because,they claimed,it would impede a “two state solution.” The reality is, there are NOT TWO STATES! There is the state of Israel and a bunch of displaced sand lizards that Jordan didn’t want to feed, so they told them “Go squat on the West Bank — the Jews will take care of you while you hide behind schools and hospitals and fire hundreds of rockets at them and bomb school buses and restaurants.”

The lead singer of the Muslim rock band known as “The Hamas Terrorists,” a dude named Meathead Grabass or something like that, took time from his quest for true love in a barnyard to whine that this will inhibit the “peace process.” Their idea of a peace process is the extermination of the Jewish state. Then they will be at peace… until they find somebody else to kill.

Democratic Sen. Dianne Feinstein (Calif.) on Tuesday castigated the idea of moving the U.S. embassy in Israel from Tel Aviv to Jerusalem, saying it would be a “terrible decision” despite previously voting for the embassy move to take place.

“Reports indicate the president will move the U.S. embassy in Israel from Tel Aviv to Jerusalem,” the California senator tweeted. “I wrote him last week to explain why that would be a terrible decision.” 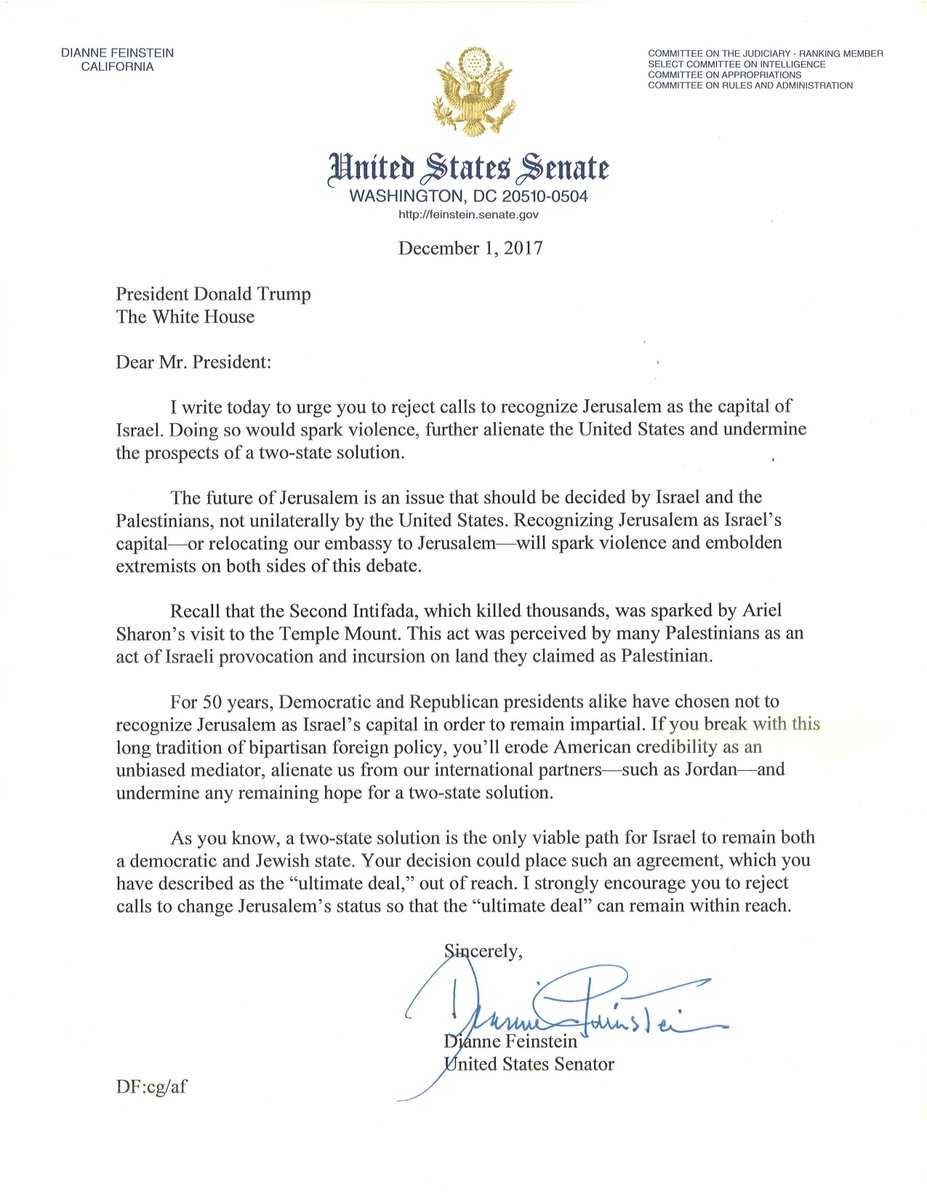 Terror group Hamas is calling for a “day of rage” Friday, urging Palestinians to protest President Donald Trump’s plan to recognize Jerusalem as Israel’s capital and move the U.S. Embassy there from Tel Aviv.

The group, designated a terrorist organization by the U.S., encouraged Palestinians in an official Arabic statement to send a message “with all available means” to Israel after the upcoming Friday prayers.

It added that making Jerusalem the Israeli capital was crossing a “red line.”

There’s so much happening at such speed that I could have listed a lot more different items here. I’ll put them on another post to try to maintain some semblance of order.

Comments Off on Rejoice, O Israel — You have a Champion