Comments Off on Media Hypocrisy

The Stupid Is Strong In This One

Remember when Democrat-dominated New York City tried to ban soft drinks larger than 16 ounces? That lead balloon failed when the New York Court of Appeals ruled that the ban exceeded the city’s regulatory authority. Democrats have such a hard time understanding what is and is not allowed by law.

(Ben Rhodes served as Obama’s foreign policy speechwriter from 2007 until the end of Obama’s presidency.)

Thank you for your service

Comments Off on Thank you for your service

And thank YOU for your service too, Military Families!

This is doubly true of the wives (and civilian husbands). I’m SO PROUD of the great support Mama Buzz provides her veteran. She’s never donned the uniform, but she definitely SERVES.

Comments Off on And thank YOU for your service too, Military Families!

Because we must. For two days I’ve been incapacitated by some kind of bug. Chills, fever, chest congestion, post nasal drip, etc. It usually happens when there’s a drastic change in the weather. When I was a smoker it happened several times a year. Now it just takes a couple days of whining to my wife and trying to get a little sympathy (usually doesn’t work; she just comes up with the standard “If men had to make babies there’d be no babies because we’re all such wimps.”) Fortunately, since I’m retired I don’t have to work every day while I’m sick. I can just sleep and overmedicate, as most men do.

[CtH: We are grateful you are back on your chair, if not totally on your feet yet. <3]

I'm just so sick of the usual suspects who call themselves republicans jumping all over Judge Roy Moore. The NRSC has cut off his funds, they say even if he wins they want nothing to do with him. What is probably the most maddening thing to me is how intense the media whores bear down on people they want to destroy, yet have not breathed a word of the senator on trial for corruption and sex trafficking… and won't. Still, I read this morning a television station in Alabama went out to do man-on-the-street interviews and couldn't find a single person who believed Moore did anything wrong.

[CtH: They only apply "believe the victims" when the alleged perp is a right-winger.  Women accused Bill Clinton of rape; Hillary called them lying floozies and the left nodded and yawned. Anita Hill accused Clarence Thomas of saying something suggestive umpteen years before, in a place where others heard whatever it was he said and where neither she nor they made anything of it at the time.  The left went berserk.  He wasn't fit to serve!  Bring out the tar and feathers.  Grrr.]

None of the respondents according to Walsh told her they believed the Post’s reporting.

“It’s hard to believe the events that transpired yesterday,” Gordon Fluker of nearby Wilsonville, AL said to Walsh about the Washington Post report.

Fluker’s response was the standard according to Walsh.

“Out of all the voters we spoke with Friday in Columbiana, we didn’t find one voter who believed the Washington Post report about Moore,” she said. 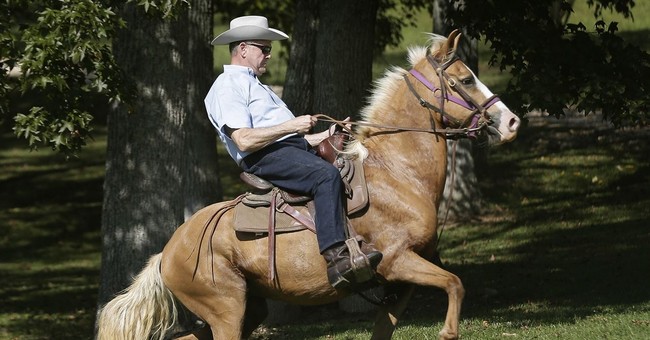 Now, the NRSC is no longer listed as part of Moore’s joint fundraising committee. The committee still includes the Moore campaign, the Alabama GOP, and the Republican National Committee. (For now.)

Many prominent Republicans, including Sen. Mitch McConnell (R-KY), Rep. Paul Ryan (R-WI), and President Donald Trump have said that if the claims against Moore are true, they do not think he is fit to be in the Senate.

[CtH: But Democrats are saying that, even if Menendez is convicted, he shouldn’t lose his senate seat!]

The survey conducted by Opinion Savvy and commissioned by Decision Desk HQ shows Moore and Democrat Doug Jones tied at 46 percent. The poll surveyed 515 likely voters Thursday and has a margin of error of 4 percent. Eighty-two percent of voters said they were aware of the allegation that Moore had a sexual encounter with a 14-year old.

Some party members are reportedly considering getting Alabama Gov. Kay Ivey (R) to move the date of the Dec. 12 special election to early next year, according to The New York Times. Based on Alabama law, it’s too late to remove Moore’s name from the ballot.

Roy Moore could do more damage to the GOP brand than an Alabama Senate seat is worth.  That’s a major concern for Republicans as Moore tries to weather allegations, reported by the Washington Post, that he initiated a sexual encounter with a 14-year-old girl in 1979 when he was 32, and others in the GOP try to figure out how best to handle the political bombshell.

CNN: Why Voters Are Standing by Roy Moore

“The Obama-Clinton Machine’s liberal media lapdogs just launched the most vicious and nasty round of attacks against me I’ve EVER faced!” he wrote. “We are in the midst of a spiritual battle with those who want to silence our message.”
“The forces of evil will lie, cheat, steal — even inflict physical harm — if they believe it will silence and shut up Christian conservatives like you and me,” he added.

One Of Roy Moore’s Accusers Worked As Interpreter For Hillary, Biden, Other Democrats

[CtH: Hmmm … just have to wonder whether (how often?) she was groped by that pig, Joe Biden?  The timing and her affiliation with top Democrats make her accusation stink to high heaven.]

Step Away From the Keyboard

Comments Off on Step Away From the Keyboard