O’Keefe does The New York Times

Revealing in their own words just how far from being “unbiased” the Times staff really is.

American Pravda I: Slanting the News

American Pravda IV: “[The NYT staff] hate [Trump] like the plague.” “They unfairly report on him.” 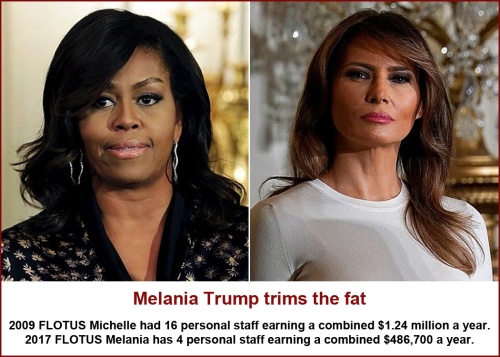 Comments Off on Melania Trump trims the fat

It was difficult for me to do a post this morning. I’m still seething from that racist Dale Evans wanna-be pig taunting General Kelly about his dead son. The common characteristics endemic to all democrat politicians: no class, no compassion, inveterate liars, hypocrites, unabashed thieves, and cowardly bullies.Were it not for their media whore allies many of them would be in prison. That’s why they can behave badly with impunity; nobody ever hears about it who isn’t paying attention like us.

THIS MAKES MY BLOOD BOIL

MAH HOMIES BE LIKE: RIGHT ON, SISTER, GIVE THEM WHITE FOLK SOME SHIT!

Democratic Florida Rep. Frederica Wilson is laughing and bragging after White House chief of staff John Kelly said he was “stunned” Thursday that Wilson criticized President Donald Trump’s call to the widow of a dead soldier.

“You mean to tell me that I’ve become so important… that the White House is following me and my words? This is amazing. That’s amazing. That is absolutely phenomenal. I’ll have to tell my kids that I’m a rock star now,” Wilson told Miami Fox affiliate WSVN-TV, while laughing.

General Kelly: “I Was STUNNED” When a Member of Congress Listened in on Trump Phone Call to Widow

General Kelly then went on to tell reporters he was so upset he went to Arlington Cemetery to be with the heroes.

White House Chief of Staff John Kelly, a former general in the U.S. Marine Corps, handled the press briefing today. Kelly started off by explaining what happens when a serviceperson in the U.S. military has been killed in combat, and the process of returning the body back home.

GENERAL KELLYS REMARKS LAST A TOTAL OF 11 MINUTES. MOST OF YOU DON’T HAVE THAT KIND OF TIME. IT IS EMBEDDED AT THE LINK BUT I’M POSTING SEVERAL VERY SHORT BITS OF IT.

Kelly on Calling Families of Fallen Soldiers: ‘Most Difficult Thing You Can Imagine’

Kelly Pays Tribute to Young Military Members: They Serve Because ‘They Love This Country’

I REALLY, REALLY DESPISE THIS WHORE

Frederica Wilson: ‘John Kelly’s Trying to Keep His Job, He Will Say Anything’

“John Kelly’s trying to keep his job. He will say anything,” Wilson said. “There were other people who heard what I heard.”

Sgt. Johnson’s mother told the Washington Post that Trump “did disrespect” her son and his family with the call.

“President Trump did disrespect my son and my daughter and also me and my husband,” Jones-Johnson said.

Right off the bat, CNN Political Director David Chalian noted that “it’s hard to listen to a father tell that story and not have sympathy” before declaring that Kelly’s emotions must be separated “from the White House chief of staff going into the press briefing room to clearly try and attempt to clean up a political mess that, quite frankly, his boss largely created.”

“I mean, he turned — he turned what should a solemn duty for any commander in chief, regardless of your political stipe, he turned into a competition with his predecessor. He turned it into a publicity stunt,” the former Kerry State Department spokesman added before praising Barack Obama’s behavior concerning fallen soldiers and their families.

Kelly also made his remarks personal, discussing the trauma he experienced after learning that his son, Second Lt. Robert Kelly, was killed while serving in Afghanistan in 2010.

Fallon responded to Kelly’s remarks on Twitter, calling the retired four-star Marine Corps general an “enabler of Trump” and “as odious as the rest.” He also told Twitter users not to be “distracted by the uniform,” appearing to suggest that Kelly should not escape criticism on the issues he discussed because he served in the military.

THIS LOATHESOME PRICK ISN’T FIT TO POLISH A SOLDIER’S BOOTS.