FROM TING’S NEIGHBORHOOD
There is a gubenatorial contest in less than a month in Ting’s home state of Virginia. Apparently that vicious punk Terry McAuliffe must be term limited. I can’t see any of these rodents giving up power for any other reason.

With barely a month to go before Virginians choose their next governor, lieutenant governor, and attorney general, all three Democratic candidates maintain statistically significant leads over their Republican rivals, according to a Wason Center survey of likely voters. At the top of the ticket, current Democratic Lieutenant Governor Ralph Northam leads former Republican National Committee Chair Ed Gillespie, 49% to 42%, with Libertarian Cliff Hyra taking 3% of the vote and another 6% still undecided.
http://www.breitbart.com/big-government/2017/10/09/new-polls-show-ralph-northam-leads-virginia-gubernatorial-race-but-ed-gillespie-within-striking-distance/

I KNOW NOTHING ABOUT NORTHAM, BUT I’M WILLING TO BET HE’S A REPTILE WHO CRAWLS ON HIS BELLY, LIKE MOST DEMOCRATS.
NORTHERN VIRGINIA IS WHERE THE D.C. SCUM FLEE TO ESCAPE THE VIOLENCE AND LIVE IN THEIR GATED COMMUNITIES WITH ARMED SECURITY.
The two candidates debated topics including tax reform, revitalizing rural Virginia, sanctuary cities, and Gov. McAuliffe’s canceled meeting with the Virginia Sheriff’s Association.

IF I NEVER SAW THIS HEAP OF RANCID PUS AGAIN IT WOULD BE TOO SOON
Virginia Sheriffs’ Association (VSA) executive director John Jones accused Virginia Democrat Gov. Terry McAuliffe of canceling a budget meeting with the VSA over having a majority of sheriffs endorsing Republican Ed Gillespie for governor.
http://www.breitbart.com/big-government/2017/10/09/va-sheriffs-assn-mcauliffe-canceled-meeting-over-ed-gillespie-endorsements/

GOP Lawmaker Calls for End of NFL Tax Exemptions Following Anti-Anthem Protests
Florida Republican lawmaker Matt Gaetz is calling on the US Congress to end the tax-exempt status of the NFL’s business office.

EVEN THOUGH SCOTUS RULED AGAINST HIM TIME AND AGAIN, THE DAMAGE WAS DONE. COMPANIES SPENT BILLIONS TO RETROFIT THEIR FACILITIES TO CONFORM WITH THE ILLEGAL REGULATIONS. DEMOCRATS SAY THEY CAN’T AFFORD TO UNDO THE CHANGES BECAUSE THERE WOULD BE MORE COST INVOLVED.

In his impatience with Congress and his administrative imperiousness, Obama dispensed with all that. What he imposed unilaterally is subject to unilateral reversal.
The rollback will encounter its own regulatory and legal obstacles but can be achieved more readily than if Obama had been able to (or bothered to) write a swath of his legacy into law.
http://nypost.com/2017/10/09/trump-is-overwriting-obamas-unlawful-green-schemes/

Chris Cox, executive director of the National Rifle Association’s Institute for Legislative Action, accused Hillary Clinton of “hypocrisy” for her stance on gun control and criticism of the NRA, telling “Fox News Sunday” that Clinton “will never spend a moment … without armed security” or “live in a high crime area.”
https://www.cnsnews.com/news/article/melanie-arter/

‘She continues to cling to office as a voice for the status quo’
THE LEFT IS WHINING SHE’S TOO CONSERVATIVE.
THIS CRONE WILL BE 91 AT THE END OF HER NEXT TERM… DOES SHE REALLY NEED MORE MILLIONS IN BRIBES AND KICKBACKS?
At least one liberal journalist, Markos Moulitsas, founder of the progressive Daily Kos and co-founder of Vox Media, reached out directly to De León, an outspoken opponent of President Donald Trump who is pushing a sanctuary state law in California, offering to work together to beat “the most pro-Trump Blue-state Dem in the country [Feinstein].”
http://freebeacon.com/politics/feinstein-reelection-bid-faces-opposition-left/

THERE IS A REASON WHY HE HAD ALL HIS RECORDS SEALED BY COURT ORDER BEFORE HE STARTED HIS POLITICAL ACT. PEOPLE WOULD REALIZE HE WAS GIVEN A PASS SOLELY BECAUSE OF HIS RACE. HE WAS FAR TOO LAZY TO APPLY HIMSELF, THAT WAS FOR OTHER, LESS GIFTED PEOPLE TO DO.
According to the Chicago Tribune, the Obama library seems more like a playland than a presidential archive. The facility will house “a children’s play garden, sledding hill, green spaces for picnics and outdoor gatherings, basketball courts and even a recording studio,” the paper reported.
But now the winning school, the University of Chicago, is wondering if all they will really get is an overgrown community center.
“This is going to be completely different,” Foundation CEO David Simas said at a recent event. “What the president and first lady said … is they simply did not want a museum that served as a mausoleum, as a way to look back.”
Indeed, James “Skip” Rutherford, the current dean of the William J. Clinton School of Public Service, insisted that the paper records aren’t really that important.
http://www.breitbart.com/big-government/2017/10/10/obamas-chicago-presidential-library-taking-criticism-no-records-scholars-view/

REPORT: NFL Players Are Now ‘Scared’ To Take a Knee, ‘People Have to Feed They Family’

“FEED THEY FAMILY”… THAT’S A DIRECT QUOTE. I USE STREET SLANG ON OCCASION TO MOCK THE CULTURE
According to The Root, who spoke with multiple NFL players on background, teams have ordered players to stand for the anthem. Players who wish to protest do so at their own career peril. The report indicates that many players are “scared” to protest, especially if they are not starters, “People have to feed they family,” the one member of the coaching staff says.

University of Oregon Students Shut Down Speech by University President
“Nothing about us without us!” 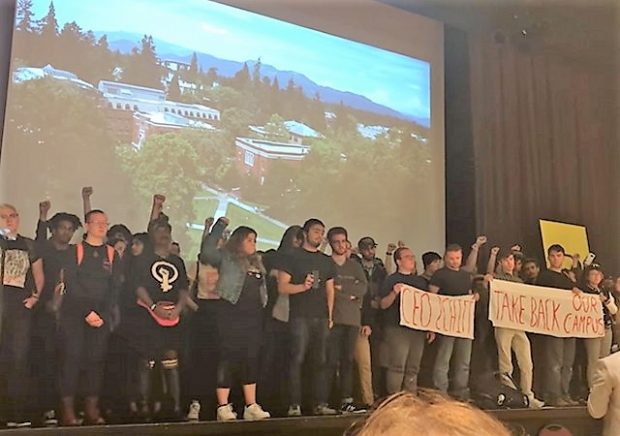 University of Oregon President Michael Schill was supposed to deliver a speech last week about a $50 million dollar gift to the school. Before he could even take the stage, the event was taken over by student protesters.
The protesters claimed they weren’t part of any single cause but chanted “Nothing about us without us” implying that they demanded to be part of any decisions made by the school.
https://legalinsurrection.com/2017/10/u-oregon-students-shut-down-speech-by-university-president/

The ominous message is most likely an indication that President Trump believes speaking with North Korean officials is an utter waste of time for all involved.
https://townhall.com/tipsheet/timothymeads/2017/10/07/donald-trump-on-north-korea-only-one-thing-will-work-n2392137

This is grotesquely brazen. Because it’s so transparently obvious what Harvey Weinstein is saying here: “Guys, I’m a liberal, I’m going to go after the NRA, I’m going to make a movie that’s about how terrible Trump is, I’m giving money to liberal causes, whaddaya say about maybe giving me a pass here, huh?”
I would be flabbergasted by the brazenness of it all if I hadn’t just read several thousand words about him trying to get well-known actresses to give him rubdowns in the nude or trying to get a pass from grabbing the breasts of models and writing it off as, hey, just part of my job. What a remarkable scumbag. What a disgusting ploy.
http://freebeacon.com/blog/shorter-harvey-weinstein-im-liberal-maybe-gimme-pass/