As Certain As a Sunrise

They just can’t help themselves. Any time a madman commits an act of unspeakable cruelty with a firearm, the knee jerk reaction from the left is to take away the rights of lawful gun owners. Sandy Hook, Steve Scalise, the five police officers butchered in Dallas, Gabriel Giffords, it’s always the same.
Jan from Diogenes’ Middle Finger gets to the nub of it:
Expect Trump and the NRA to take the bulk of the attacks because the Democrats are no longer driven by reason, they are just lashing out blindly, instinctive actions of the basest animal instincts of their psyches which have been eaten by terminal TDS (Trump Derangement Syndrome) and the fury over a lost election.
http://www.diogenesmiddlefinger.com/2017/10/democrats-fly-into-action-to-politicize.html

It’s not yet clear how the shooter, 64-year-old Stephen Paddock, acquired his guns or if gun control measures could have prevented him from obtaining them, but leading Democrats are already demanding stricter gun control legislation.
http://dailycaller.com/2017/10/02/democrats-immediately-call-for-gun-control-after-las-vegas-shooting/

House Minority Leader Nancy Pelosi (D.-Calif.) sent a letter to House Speaker Paul Ryan (R.-Wisc.) saying that Congress “has a moral duty” to address what she called an “epidemic of gun violence.”
In addressing the issue, she said, the House should both enact legislation to “strengthen” the background checks conducted when people purchase guns and impanel a special committee on “gun violence”
https://www.cnsnews.com/news/article/cnsnewscom-staff/

All-Out War Against The NRA Begins After Las Vegas Massacre

Her use of the word “silencer” is leftist-speak for suppressor. It is intended to give the impression that suppressors completely mute a gun–the way they appear to do in Hollywood movies–thereby silencing the gunshot altogether.
@HillaryClinton
The crowd fled at the sound of gunshots.
Imagine the deaths if the shooter had a silencer, which the NRA wants to make easier to get.
7:03 AM – 2 Oct 2017 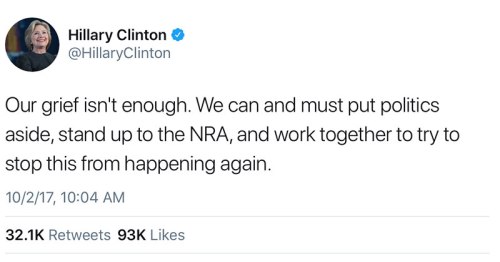 CBS Executive Fired for ‘No Sympathy’ Comments About Las Vegas Shooting
Geftman-Gold wrote in a Facebook post comment how she didn’t have any hope that Republicans, “Repugs,” would “ever do the right thing,” and that she isn’t sympathetic to the shooting victims because country music fans are often “Republican gun toters.” The Daily Caller was the first to report on her comments.

This is the Left=> Dem Lawmaker Refuses to Participate in Moment of Silence For Vegas Victims
Democratic lawmaker Rep. Seth Moulton from Massachusetts said he would not be participating in the moment of silence on the House floor for the innocent Americans killed in the mass shooting in Las Vegas Monday.

This is the left.
Moulton tweeted, “As after #Orlando, I will NOT be joining my colleagues in a moment of silence on the House Floor that just becomes an excuse for inaction.”
http://www.thegatewaypundit.com/2017/10/left-dem-lawmaker-refuses-participate-moment-silence-vegas-victims/

Wasting no time, ABC on Monday jumped to gun control and finding possible villains for the mass slaughter in Las Vegas. Reporter Cecilia Vega cited a Hillary Clinton tweet bashing the NRA and worried about GOP gun legislation in the House. With the facts still unclear, Good Morning America co-host George Stephanopoulos lectured, “This is going to re-open the debate over guns in this country.”
https://www.newsbusters.org/blogs/nb/scott-whitlock/2017/10/02/abc-eyes-nra-gop-congress-villains-after-las-vegas-slaughter 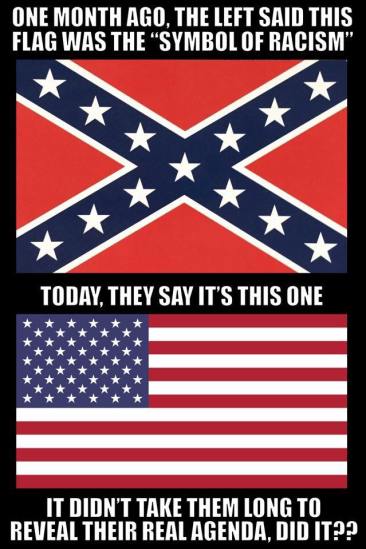 13 responses to “As Certain As a Sunrise”