Taking stupid to a whole new level. Check out the dramatic flag tie on this “I’m so patriotic” SJW while declaring he will put forward a resolution to impeach President Trump for calling certain individuals “sons of bitches.”

Does Israel discriminate against Arabs? Is it today’s version of apartheid South Africa? Olga Meshoe, herself a South African whose family experienced apartheid, settles the question once and for all.

Comments Off on BDS: A slick propaganda effort built on lies

I’m glad she’s keeping this up. It was one of the few initiatives of the previous administration that I genuinely admired.

A group of clergy and lay scholars from around the world have taken the very rare step of presenting Pope Francis with a formal filial correction, accusing him of upholding seven heretical positions about “marriage, the moral life, and the reception of the sacraments” which, they say, has “caused these heretical opinions to spread in the Catholic Church.”

The signatories stress they are not accusing the Pope of formal heresy (when a person departs from the faith by doubting or denying some revealed truth with a full choice of the will), and are making “no judgment about Pope Francis’s culpability in propagating the seven heresies” as it is “not their task to judge about whether the sin of heresy has been committed.”

The 25 page letter was delivered to the Holy Father at his Santa Marta residence on Aug. 11. This is the first filial correction of a reigning Pontiff since Pope John XXII was admonished in 1333 for teaching that the souls in heaven wouldn’t see God completely until after the Last Judgment, a heresy he recanted on his deathbed.

Pope Francis has so far not responded.

After obsessing for months on the nothingburger Russia story, the news networks have again showed their absurdly biased faces in their treatment of the corruption trial of Democrat Senator Bob Menendez.

“For contrast, on just one day (September 18), CNN spent more than 45 minutes analyzing former White House Press Secretary Sean Spicer’s 60-second appearance at the Emmy Awards ceremony the night before. And that total doesn’t include all of CNN’s coverage of the Emmys, just the portions specifically about Spicer.”

It’s David vs. Goliath; the republican establishment has pumped $30 million into the primary race between corrupt, crooked-as-a-dog’s-hind-leg Luther Strange, and Judge Roy Moore, who lost his job for standing up for his faith and refusing to remove the Ten Commandments from his courtroom. It has come down to a contest between Steve Bannon and Donald Trump who, inexplicably, has backed McConnell’s choice, Strange. Time will tell.

Judge Roy Moore: ‘If They Can’t Beat Me with $30 Million…There’s a Crack in the Dam’

Judge Roy Moore delivered his closing message to voters in Alabama at a raucous barn rally packed with supporters.
“If they can’t beat me with $30 million and we only had about $1.5 … If they can’t beat me, then there’s a crack in the dam, the whole thing falls,” he said as the crowd applauded.
http://www.breitbart.com/big-government/2017/09/25/judge-roy-moore-if-they-cant-beat-me-with-30-million-theres-a-crack-in-the-dam/ 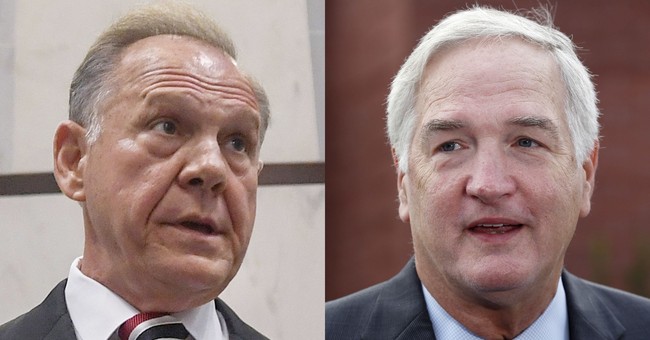 My guess was that Moore will win tomorrow night by eight points despite the fact that he’s led by more in various polls of the Alabama runoff. If Trafalgar’s right, the actual margin will be double that. It’ll be a blowout and an embarrassing rebuke to Trump, who not only couldn’t get his guy over the finish line after a rally in Huntsville but couldn’t get him within 15 points of victory.
https://hotair.com/archives/2017/09/25/whoa-roy-moore-57-luther-strange-41-new-alabama-gop-senate-poll/

Trump throws McConnell under the bus on Alabama radio…

CNN – “As you know, Mitch is not, polling-wise, the most popular guy in this country,” Trump said. “They like to label (Strange) because he happened to be there for a number of months in the Senate, so they like to label him as Mitch’s best friend but he’s not. He hardly even knows him. He’ll be fighting Mitch.”
http://therightscoop.com/trump-throws-mcconnell-under-the-bus-on-alabama-radio/#ixzz4tnDjxND4

Senator Bob Corker (R-TN) is set to receive more than $3 million in direct payments from the City of Mobile from sales taxes paid at stores in McGowin Park by Alabama consumers as part of a controversial and unprecedented sweetheart deal that Senator Luther Strange (R-AL) did nothing to stop as Attorney General of Alabama when the deal was arranged in 2013 and 2014 by a law firm whose partners and political action committee contributed $28,000 to his Senate campaign in 2017.
http://www.breitbart.com/big-government/2017/09/25/while-alabama-attorney-general-luther-strange-did-nothing-to-stop-swamp-deal-to-pay-bob-corker-3-million/