Not much sleep; doing what I can before nap time.

I WAS LOOKING THOUGH SOME OLD TOY WEBSITES LAST NIGHT AND I CAME ACROSS THIS AD FOR FIREARMS.
LOOK FAMILIAR? YUP, IT’S OLD DIANE FIENSTEIN HERSELF, PROBABLY FROM THE 50s, SINCE THE AD HAD AN ADDRESS WITH NO ZIP CODE.

bluebird of bitterness adds: The above is a photoshop. Here is the original: 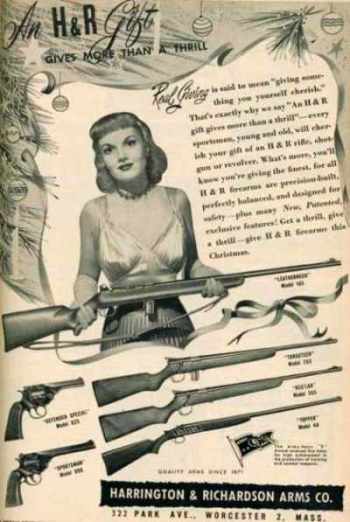 The Creeps in Hillary Clinton’s Corner
Grant Stinchfield tells Hillary Clinton What Happened: “Hillary, you’ve spent your entire career surrounded by creeps. Never once did you tell them to get away from you. But here’s the real reason why you wanted to tell President Trump to ‘back up.’ It’s because you hate the people he speaks for—the miners you wanted to put out of business, the gun owners, the church goers, the union families, the factory workers, the people you called deplorables…For three decades, you used creeps to prop you up all in a condescending effort to look down on all of us. Now you’re nothing but a two-time loser who can’t stop whining, and my prediction is your book will be a flop because America already knows exactly what happened.”

The party’s over: Republicans and Democrats are both finished

We all know just how loudly and angrily the left has been reacting to President Trump in general. But in case there’s any doubt about how the partisan right is responding to the Trump team’s moves lately, there shouldn’t be. They’re infuriated. But there’s also seems to be an understanding that there’s little they can do about it.
Somewhere, George Washington’s ghost must be smiling wide with those wooden teeth of his. It was Washington who warned against the formation of political parties and urged the nation to choose leaders for reasons that transcended partisan politics.
https://www.cnbc.com/2017/09/14/trumps-new-reality-republicans-and-democrats-are-both-finished.html

POINT ONE: IF NOT FOR THE ELECTORAL COLLEGE, NEW YORK AND CALIFORNIA WOULD CHOOSE OUR LEADERS PERENNIALLY
POINT TWO: YOU WON THE POPULAR VOTE BY 3 MILLION ALL RIGHT… WITH 5 MILLION ILLEGAL VOTES
Clinton won the 2016 popular vote by nearly 3 million votes, a fact she routinely brings up in her new memoir. But Trump won the Electoral College, a body of 538 members who select the president based on the popular vote in each state, meaning the person who gets the most votes nationally doesn’t necessarily win the election.
http://www.msn.com/en-us/news/politics/hillary-clinton-time-to-abolish-the-electoral-college/ar-AArTLti?li=BBmkt5R&ocid=ientp

“Well, they don’t have to buy my book, and they can turn off the radio when they hear me talking. I’m not going anywhere,” Clinton said. “I have the experience, I have the insight, I have the scars that I think give me not only the right, but the responsibility to speak out. And 2018 is going to be incredibly momentous. We have a chance I won 24 congressional districts that have a Republican member of Congress sitting in them.”
http://dailycaller.com/2017/09/12/defiant-hillary-to-dems-im-not-going-anywhere/

Trump Sets The Record Straight: “If We Don’t Have The Wall, We’re Doing Nothing”
The Trump administration may very well demand border wall funding be included in a deal with DACA, as TGP reported last night, Speaker Ryan believes support for it is slim to none. 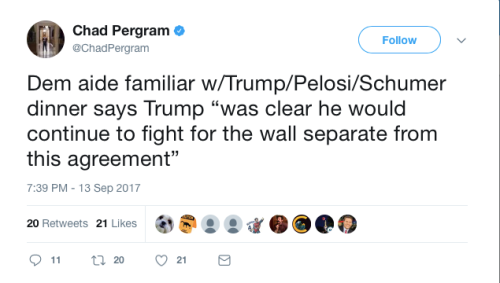 9 Lies About DACA Trump Is Buying Into

Via Twitter, Trump praised the almost 800,000 illegal alien recipients of the Deferred Action for Childhood Arrivals (DACA) program, saying they are “good, educated and accomplished young people,” but failing to mention some of the key points on the issue that he often brought to light during the 2016 presidential election.
Now, Trump seems to be buying into a handful of untruths about DACA, amnesty for illegal aliens and his working-class, middle-class voter base.
http://www.breitbart.com/big-government/2017/09/14/9-lies-about-daca-trump-is-buying-into/

On Wednesday’s CNN Tonight, host Don Lemon took the extraordinary step of conceding that Hillary Clinton made mistakes during the election that she won’t acknowledge, but it didn’t sit well with CNN political analyst and American Urban Radio Networks White House correspondent April Ryan as she vehemently defended Clinton.
https://www.newsbusters.org/blogs/nb/curtis-houck/2017/09/14/ 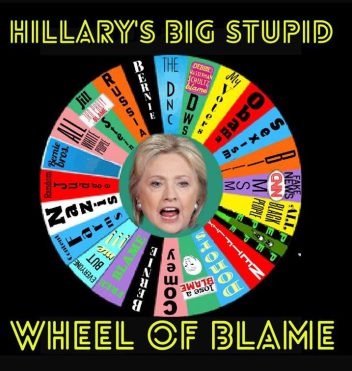 Comments Off on Things of Various Importance