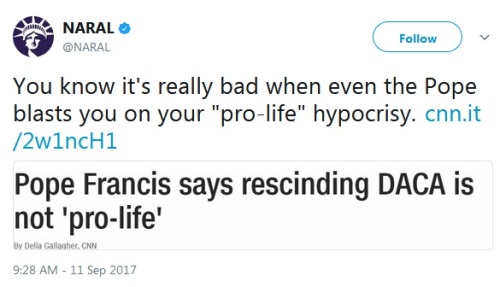 I don’t know if Pope Francis actually said that rescinding DACA was not pro-life. But even if he did, it has no bearing whatsoever on the FACTS that:

(a) Obama overstepped his authority in ordering it in the first place, and
(b) Trump was on solid constitutional grounds in rescinding it and telling Congress to pass it properly if they care so much.

Nobody ever said the pontiff from Argentina knew diddly squat about our form of government.

Comments Off on NARAL quotes the pope? BWAHAHA!