In addition to your prayers for those devastated by Hurricane Harvey, please remember to pray for those affected by the huge wildfire in LA. Last I heard, it was 30% contained.

Also continue to pray that Hurricane Irma fizzles. It’s looking like it may hit Florida on Friday. Ditto the 50+ wildfires in Montana and Idaho where more than half a million acres are going up in smoke.

News to Make You Go: Bleccchhh!!

The plan was to hold onto this until tomorrow but I have another rant in mind. Besides, like visitors and fish, news begins to stink after a few days.
Woman of the People=> Hillary to Charge Toronto Residents $2400 to Meet Her on Her Book Tour
Failed presidential candidate Hillary Clinton proves once again that she truly is the woman of the people while she charges Toronto residents $2400 each to meet her on her book tour.

Hillary also announced that she would FINALLY be visiting Wisconsin, a state she ignored during the Presidential election and ultimately lost to Donald Trump-to promote her new book. Hillary has no shame. She’ll travel to places to collect money and peddle her book, but didn’t care enough to talk to the American people face to face during the election.

One thing is for sure, Hillary Clinton has been consistent about one thing her entire life–her insatiable greed
The opportunity to meet Clinton on her book tour is something that best-selling conservative author, radio host and political humorist Mark Steyn called “a hell of a steal” during a Wednesday appearance on Tucker Carlson Tonight.

I HAVE NOT YET BEGUN TO REPULSE:
Birthday formation! Michelle Obama, Serena Williams, Blue Ivy and more celebrities recreate Beyoncé’s iconic video pose in a tribute to the singer on her 36th birthday
Celebrities have paid tribute in a big way for Beyoncé’s 36th birthday on Monday
Michelle Obama, Serena Williams, Michelle Williams, Kelly Rowland and more all joined together to recreate singer’s now-iconic Formation video look
Beyoncé’s daughter, Blue Ivy, her mother Tina Knowles Lawson and mother-in-law Gloria Carter also participated in the special shoot
Photos appeared as birthday tribute on Beyoncé’s website along with a message for people to help those affected by hurricane Harvey by donating money
THE MOOCH: AT LEAST HER FACE IS HIDDEN

Celebs Who Dressed As Beyonce To Ring In Her 36th Bday
RIVETING STUFF, ISN’T IT?

I THINK IT’S A REAL TESTAMENT TO THEIR HUMANITY THAT THEY GAVE A SHOUTOUT TO ALL THE POOR FOLK WHO LOST EVERYTHING DOWN THERE IN REDNECK LAND. WHAT NICE PEOPLE

A Coward Dies a Thousand Deaths

First, I’d like to ask you to join in holding our beloved Chrissy and her family up in prayer as they face a monumental struggle. We all have faced obstacles to some degree, it’s a part of life. Almighty God sets challenges before us and only complete faith in Him will see us through.

The mask is off.The true intent of elected republican officials has been exposed.Their forte is that of playing the role of Walter Mitty-like characters raging against their democrat foes when they are in the minority and have nothing to lose.Time and again,they have railed against what the ruthless Barack Obama and his co-conspirators have wrought,such as Obamacare,immigration,deregulation and tax relief.It’s easy to boast about what you would do if ‘you only had the power.’Even with control of both the House and the Senate Obama acted as a governing body unto himself.
The GOP was given everything they claimed they needed with the election of Donald Trump last November.Eight months on they have accomplished nothing.The shameful truth is that they never intended to.Leading is hard.Someone may say bad things about you.Democrats have a most powerful weapon in their most dedicated allies, the media.The Alt Right has no such help.
The true patriots of this nation face a Hobson’s Choice.Vote for these yellow cowards or allow our country to fall into the clutches of Nancy Pelosi and Chuck Schumer once again.
“Vote them out!” you say.Won’t happen.the entrenched elite have the power to crush all challengers to maintain the status quo.During the Tea Party movement in 2010 they picked up more than 80 seats in Congress.Most had never held elected office before.When they got to Washington they were summarily ordered by McConnell,Boehner and the rest of the reptiles to shut up,do what you’re told or their tenure in DC would be a short one.They would be deprived of committee assignments and would face primary challengers fully funded by the RNC and their corporate masters.
Dianne over at Patriot Retort posted an article this morning on the real reason the republicans don’t want DACA to end:
The reason President Obama, in his unconstitutional role as pretend legislator, unilaterally created DACA was because the actual legislative branch did not have the votes to pass an actual law.

And the reason is simple.

Americans were sick and tired of Washington bending over backwards for illegal aliens while we take it up the back door.
But instead of accepting that the American people – through their representatives – were saying “no” to the DREAM Act, Barack Obama simply passed the DREAM Act with the stroke of a pen.

As if he was both the Executive branch and the Legislative branch.

In other words, Obama violated the constitutional Separation of Powers to enact a law Congress couldn’t pass.

And at the time he did this, most Republicans in Congress were outraged.

Even Paul Ryan whined like a stuck pig about how unconstitutional DACA was.

But that was all for show.
They know if Trump ends DACA, they will be forced to act on the so-called DREAM Act.

And the last thing these guys want is to once again be seen screwing over their constituents while being caught in yet another campaign lie.So if Trump ends it — and they are forced to betray their voters while siding with Democrats and illegal aliens – Republican incumbents know they’ll be in trouble in 2018.

And when the choices are war or dishonor, Congressional Republicans will always choose dishonor.
http://patriotretort.com/real-reason-republicans-congress-dont-want-daca-end/

RINO Lindsey Graham: We Will Work to Find DACA Fix

In 2007 while speaking to the radical La Raza organization, Graham said he was going to tell the “bigots” who opposed amnesty to “shut up.”

“If President Trump chooses to cancel the DACA program and give Congress six months to find a legislative solution, I will be supportive of such a position,” Graham said in a statement. “I have always believed DACA was a presidential overreach. However, I equally understand the plight of the Dream Act kids who — for all practical purposes — know no other country than America.”
TRANSLATION: WE CAN PUT OFF MAKING ANY HARD DECISIONS INDEFINITELY BECAUSE WE WANT TO PRETEND WE CARE ABOUT THE AMERICAN PEOPLE AS MUCH AS WE CARE ABOUT OURSELVES
FROM KURT SCHLICHTER AT HOT AIR:
Yeah, so after nearly two years of tiresome finger-wagging about “the Rule of Law” and how we need to put our “principles” above our desire for “winning,” the whole sordid scam we always knew it always was is revealed for the world to see. They can’t hide it anymore and they aren’t even trying. Their glorious “conservative principles” aren’t principles at all but a skeevy ploy designed to tie our hands and keep us from pursuing policy goals our establishment coalition partners disfavor. They want open borders. They want illegals. They want cheap foreign labor that doesn’t get uppity to man their donors’ corporations so the Captains of Crony Capitalism don’t have to fuss with American workers who won’t tolerate being treated like chattel. Yeah, “we’re better than that” all right – if you mean that we are better than enforcing the laws the American people passed through a constitutional process if the ruling class decides it doesn’t like them.

“The Rule of Law” is for us, not for them. “The Rule of Law” was supposed to be a shield to protect us from the ravages of the powerful, but our Truer-Than-You Cons
use it as a sword to cut our legs out from under us and keep us from defending our own interests.

Report: Obama ready to “speak out” if Trump cancels DACA 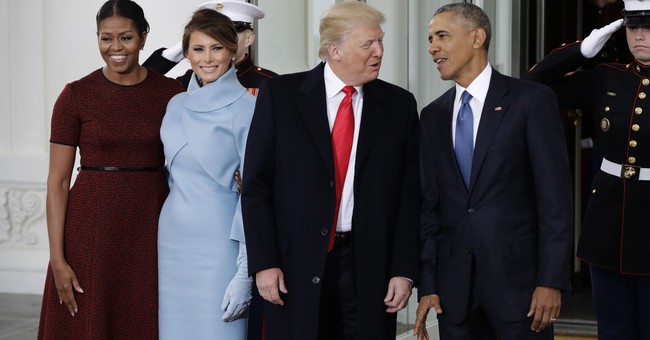 THE FORMER PRESIDENT HAS THREATENED TO TAKE TIME OUT OF HIS BUSY VACATION SCHEDULE TO SPEAK BEFORE THE SWOONING MEDIA, WHO’VE BEEN CAST ADRIFT SINCE HE WAS FORCED TO LEAVE OFFICE.
He said he would not remain silent in the face of “efforts to round up kids who have grown up here and for all practical purposes are American kids, and send them someplace else, when they love this country.”…

“Back to a country they don’t know with a language they don’t speak?” the person close to Obama said. “It’s cruel.”
Why attack Trump now? I think there’s more to it than DACA just being near and dear to Obama’s heart. He knows that congressional Republicans are going to be jammed up here to an unusual degree. Immigration is a fraught issue for the GOP under the best of circumstances but DREAMers are an especially hard case due to their having come here as children.
https://hotair.com/archives/2017/09/04/report-obama-ready-speak-trump-cancels-daca/