As the Trumps headed to Texas, our FAKE NEWS media focused on the Big Issues, like Melania’s shoes.

After hating on hurricane victims, this Leftie got shown the door to the unemployment line.

This man reminds me of a doctor I saw once. I’ll spare you the details, but he had me in tears by the time he was done with me. Later, I saw in the paper that he had lost his medical license for renewing patient prescription by phone FROM INSIDE A MENTAL INSTITUTION! I knew that guy did not have both his oars in the water. And neither does Keith.

NOTE TO OUR READERS: It’s worth loading our posts individually (as opposed to just scrolling through them) so you can see the comments.  We often add news tidbits there that don’t make it to the level of blog posting.  Also, feel free to click LIKE or add links or comments yourself!  We value our readers’ input.

So PROUD of my Army kid who was deployed to help out with the hurricane!

“Here’s a few photos from yesterday – busy day. Neighborhood was under five feet of water.”

Last month, Joe Arpaio was convicted by a federal judge of CRIMINAL CONTEMPT.

He had been issued a court order to stop traffic patrols that the court alleged were designed to target illegal immigrants. Arpaio said the traffic patrols were not aimed at Hispanics and that he had done nothing wrong in continuing them. The only person being targeted was Sheriff Arpaio and President Trump was RIGHT to pardon him.

This video is worth your undivided attention. In it, President Trump lists some of the murderers and traitors who were pardoned by two of his Democrat predecessors.

President Trump’s response to question about his pardoning Sheriff Joe [4:26]

Comments Off on Presidential Pardons

Comments Off on All Means All

Lil Buzz made a ramp out of the xylophone, then dropped plastic beads on it to hear them play the notes.

In other news, we are SO PROUD of Bunny, who made the scary jump from Special Ed Pre-K to Mainstream Kindergarten!  She’s on the Autism Spectrum (though much less than Buzz), but has been doing SO WELL with her therapies and performance in school that Mama Buzz and all her peeps agreed she was ready!

She’s in the same classroom where she had summer classes, so is very comfortable there.  And she is still going to take the Special Ed bus with Buzz that she’s used to, have some extra help with a few things in the classroom, and go to Speech, Occupational, and ABA therapies after school.

But she totally ACED her Kindergarten academic evaluation.  She can count to 100; they only asked for 20!  LOL  And she knows her alphabet and can spell all three of her names, plus “Mom”, “Dad”, and her sibs’ first names.  So, between being accustomed to the whole school routine and being ahead on the academics, she’ll be able to focus on the social stuff that is her big autism-y challenge.

They Just Can’t Help Themselves

Yesterday, President Trump (I STILL love typing that!) held a joint press conference Monday with Finnish President Sauli Niinisto. Like Pavlovian dogs, whenever the press gets a chance to harass (Arkansas is the only state where “harass” is two words) the president, they can’t resist. They jumped on him about issuing a pardon to patriot Sheriff Joe Arpaio. There is not another man in Washington who would have responded the way Trump did. He proceeded to rip them a new one about all the sleazebags, terrorists and felons that were pardoned by Obama and Clinton with nary a peep from these howling jackals.

Trump on whether Russia is a threat: “I consider many countries as a security threat”

I THINK THE MEDIA ARE SO FULL OF THEMSELVES, THEY DON’T REALIZE THE FUN HE HAS PISSING THEM OFF.

Donald Trump calls Chelsea Manning ‘he’ while comparing her to Joe Arpaio. Ms Manning has undergone a very public transition from man to woman. 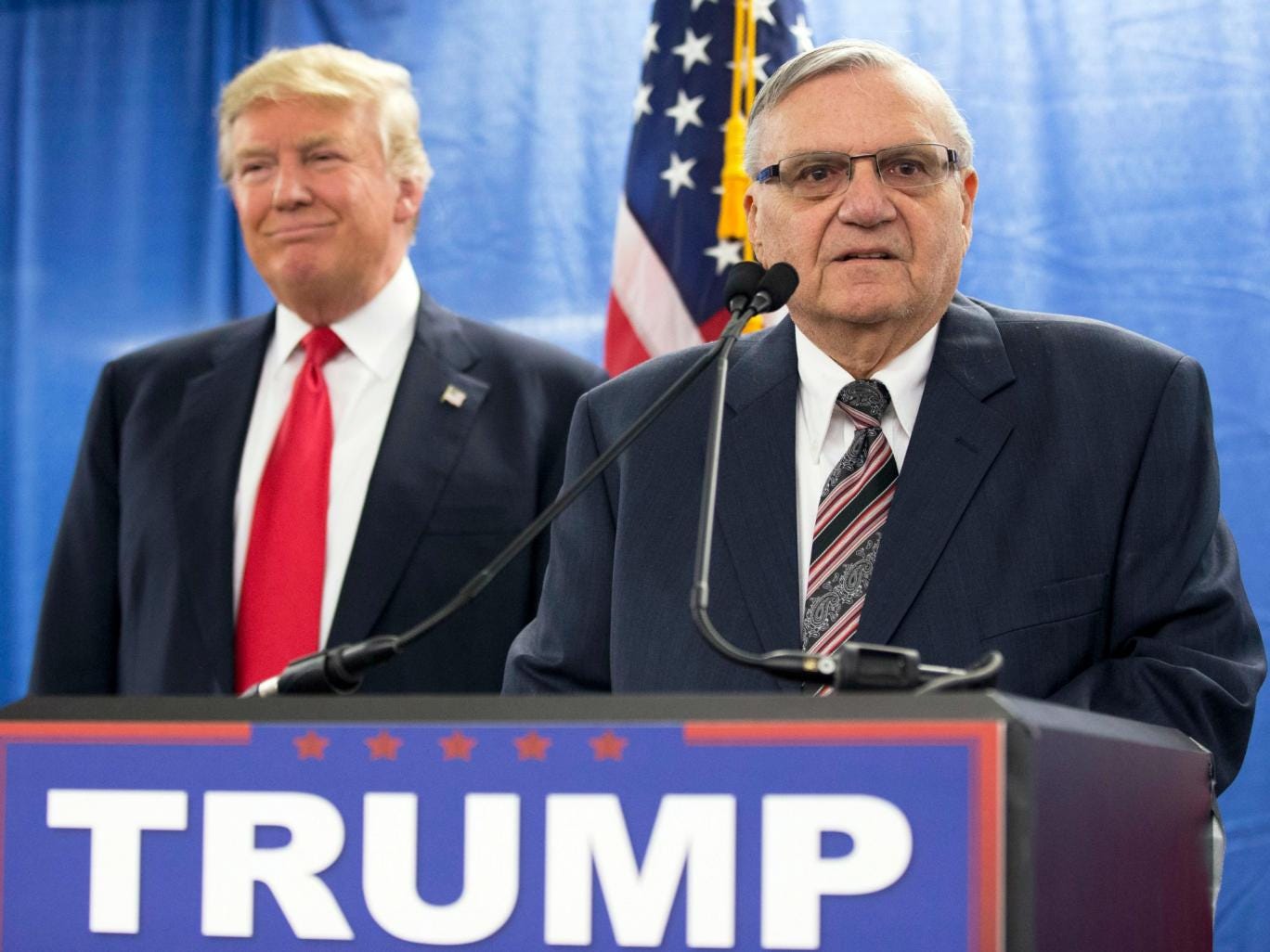 Ms Manning, who was convicted on criminal charges for leaking hundreds of thousands of classified documents, has undergone a public transition in recent years to become a transgender woman. She saw her sentence commuted earlier this year by former President Barack Obama.

In addition to Ms Manning, Mr Trump referenced Marc Rich — an investor who received a pardon from former President Bill Clinton on his last day in office — and Oscar Lopez Rivera — a Puerto Rican activist and militant whose sentence was commuted by Mr Obama.

After MSNBC Host Broadsides Ted Cruz With ‘Gotcha’ Question About Hurricane Sandy, He Drops the Thunder

“Well, look, there’s time for political sniping later,” Ted Cruz said before Tur cut him off. “I think our focus needs to be on this crisis and this disaster….  The problem with that particular bill is it became a $50 billion bill that was filled with unrelated pork. Two-thirds of that bill had nothing to do with Sandy. And what I said then, and still believe now, is that it’s not right for politicians to exploit a disaster and people are hurting to pay for their own political wish list.”

THIS IS PART OF THE ONGOING CRUSADE BY MAJOR MEDIA TO SHUT DOWN CONSERVATIVES. IF YOU CAN DOWNLOAD AND POST THIS TO KEEP AFTER IT GOES AWAY, YOU SHOULD DO SO.

HIS REASONS ARE HIS OWN. I SUSPECT HE REMEMBERS WHAT HAPPENED WHEN THEY OPENED THE SUPERDOME IN NOLA TO DISPLACED PEOPLE. THERE WERE RAPES, MURDERS AND THEY LEFT IT IN SQUALOR WHEN THEY FINALLY LEFT. MAYBE HE DIDN’T WANT THAT HAPPENING TO HIS SANCTUARY. JUST A GUESS.

[CtH: Or he’s just showing his true “money first” colors.  IMO, this man’s “prosperity theology” preaching has nothing to do with what Jesus Christ taught. http://www.thebiblicalworldview.org/is-joel-osteen-a-false-prophet/%5D

Joel Osteen is facing a public relations nightmare as his 17,000-seat facility, Lakewood Church, is keeping doors closed during the overwhelming crisis caused by Hurricane Harvey.

As The Gateway Pundit reported Sunday, an eyewitness named Isabel Torres uploaded a video to Facebook which shows looters making away with televisions.

SCAVENGERS LIVE OFF THE CARRION

Members of the Louisiana Cajun Navy, a group of Louisianians helping Tropical Storm Harvey victims in Texas, were shot at Monday by apparent looters, the group said on Facebook.

The Cajun Navy has become widely known across the state for its response efforts during natural disasters and is made up of different groups. The group of first responders previously provided assistance to Louisianians during last year’s historic August floods.

One group of rescuers are in Texas already and more are expected to be on the way. Those who have arrived have brought their own boats to aid in the rescue efforts.

THERE WAS WORD OF SOME CAJUNS WHOSE MOTOR DIED WHILE THEY WERE RESCUING STRANDED PEOPLE. AS THEY TOOK SHELTER, SOMEBODY (GUESS) TRIED TO STEAL THEIR BOAT.

SHADES OF RAY NAGIN, THE FORMER MAYOR OF NEW ORLEANS, NOW A CONVICTED CRIMINAL, WHO DREAMED OF TURNING THE CRESCENT CITY INTO A “CHOCOLATE CITY.” HE LET HUNDREDS OF BUSES SIT IDLE WHILE PEOPLE WERE TRYING TO GET AWAY FROM KATRINA. THEN HE BLAMED GEORGE W. BUSH. THERE’S A REASON WHY EVERY BIG CITY TOILET IN THE COUNTRY IS RUN BY DEMOCRATS.

Now Houston is flooded, the city is expecting more rain, looters are ransacking stores, and people are dying. And it’s only going to get worse.
On top of that, Mayor Turner is not taking the governor’s calls:

LIBERAL POLITICIANS ARE GREAT AT CREATING DISASTERS.  DEALING WITH THEM, NOT SO MUCH.

THIS WAS TOO GOOD TO HIDE IN THE REPLY SECTION:

A family in Texas lost their home to a fire during Hurricane Harvey, but they’re finding comfort in the only thing left standing: A statue of the Virgin Mary. The Rojas family of Robstown, Texas, had boarded up their home and left town ahead of the storm, but an electrical fire broke out and quickly spread in the winds of the storm, destroying their home as well as two others.

Message From Hurricane Harvey: Americans Helping Each Other

For once, cable news is not dominated by talking heads shouting at each other, but by images of volunteers, black and white, arriving in flat-bottomed boats to rescue neighbors from flooded buildings. Journalists are helping to direct emergency crews to save stranded drivers rather than encouraging enraged mobs to riot against the police.

Houston vs. Berkeley
I FELT COMPELLED TO INCLUDE THIS FROM DIANNY AT PATRIOT RETORT

Yet the news media has spent the last two weeks trying to convince us that those violent, disgusting thugs are “standing up to hate” and “preserving the fabric of America.”

It’s hard to watch those videos and not think, “What the hell is wrong with people?”

The Antifa cretins marched through Berkeley chanting, “No Trump, no wall, no USA at all.”

How someone could watch video of these animals and believe they are “anti-hate” or “peaceful” is anybody’s guess.

But they are not America.

This weekend in Houston, we witnessed the true spirit of America.

The guy with the Confederate flag on his boat is saving everyone. Blacks, whites. Everyone. #Meyerland #Harvey 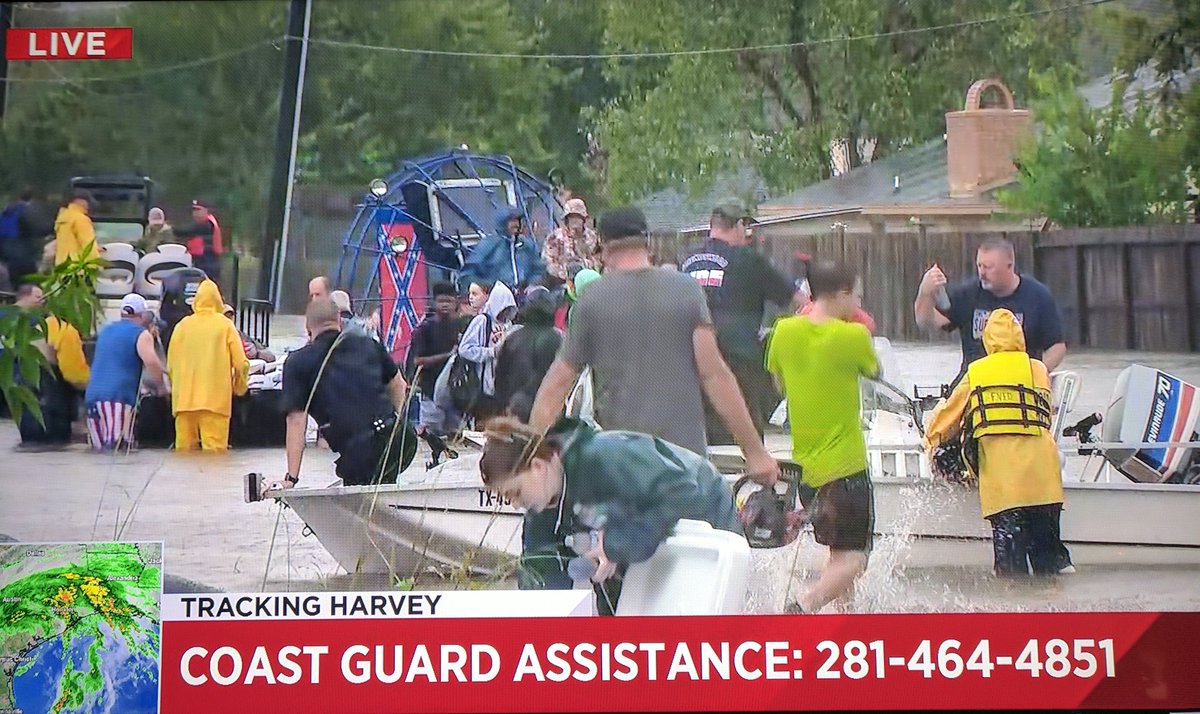 I know it’s difficult to watch the violence Antifa is bringing to our streets and not grow discouraged at the sight of such madness.

But they are not America.

And they don’t want to be.

After all, they’re the ones chanting “No USA at all.”

But the American spirit is greater than this.

We are America — where neighbors help neighbors.

And strangers drive in from great distances to come to the aid of others.

This is the America Antifa despises.

This is the America Antifa seeks to eradicate.

But they won’t win.

There is something more powerful than the evil of Antifa — and that’s the true spirit of America.

And the true spirit of America transcends race or national origin.