They Got What They Wanted

Perhaps it is fortuitous that this is God’s day and there’s nobody around. There has been a storm brewing for a very long time, instigated by that America-hating racial agitator who once lived in Chicago but is now a nomad, staying wherever he can squat on someone else’s property. It blew up yesterday when people legally obtained a permit to march in Charlottesville to protest the destruction of our history and demonstrate they were sick and tired of being blamed for all the atrocities perpetrated by the far left and their mindless henchmen to whom violence is a way of life.

FROM DIANNY AT PATRIOT RETORT:
And I find displays of racial supremacy repugnant and vile whether from Black Lives Matter or LaRaza or the Tiki Torch Idiots of “Unite the Right.”
But this is what happens when you normalize identity politics.
And that’s exactly what the Left has done.
The truth is, subdividing people by skin color is no longer fringe; it’s become the norm.
Teachers in grade schools, high schools, and colleges are berating white kids for something they have no control over – the color of their skin.
The media has perpetrated this divisiveness by celebrating Black Lives Matter while parroting the claims of “white privilege.”
So is it any surprise that there is pushback from people who claim to be on “the Right?”
This divisive identity politics is exactly what Hillary Clinton exploited in her run for the White House. And she’s exploiting it still by embracing the so-called ResistanceLOL.

THE MOST VICIOUS PUNK IN AMERICA, GOVERNOR TERRY McAULIFFE, ALLOWED THE ‘UNITE THEN RIGHT’ GROUP TO MARCH, THEN ALLOWED THE ANTIFA AND BLM TERRORISTS TO COME IN AND BEAT THE SHIT OUT OF PEACEFUL PROTESTERS. HE ORDERED THE POLICE TO STAND DOWN SO THE ANARCHISTS WHO HIDE THEIR FACES COULD ATTACK AND BEAT INNOCENT PEOPLE UP. A CAR PLOWED INTO A GROUP OF PEOPLE AND KILLED ONE AND INJURED 19. A POLICE HELICOPTER ALSO CRASHED AND TWO OFFICERS WERE KILLED..
THE HEADLINE SHOUT: THREE DEAD!! LIKE THE POOR GUY WAS RESPONSIBLE FOR THE COPS’ DEATHS AS WELL.
THE MEDIA WHORES ARE EATING THIS UP, BLAMING WHITE PEOPLE IN GENERAL AND TRUMP IN PARTICULAR. HOLLYWOOD TYPES, OF COURSE, ARE WHINING ABOUT IT ALL BEING THE PRESIDENT’S FAULT. HE CONDEMNED ALL VIOLENCE, BUT THAT WASN’T GOOD ENOUGH FOR THEM. THEY DEMANDED HE SINGLE OUT WHITE PEOPLE FOR BLAME. THE BLACKS WERE JUST INNOCENT LITTLE ANGELS. THE WHITES WERE REFERRED TO AS “WHITE SEPARATISTS”, WHITE NATIONALISTS”, FAR-RIGHT, ALT RIGHT, WHITE TRASH, ANY VILE LABEL THEY COULD THINK UP.

As news broke of a terrorist attack in Paris in November 2015, Trump immediately tweeted that he was praying for “the victims and hostages.” Very soon after a shooting at an Orlando nightclub in June 2016, Trump tweeted that he was “right on radical Islamic terrorism.”
But he kept quiet Saturday morning as a protest led by white nationalists, who arrived with torches and chants in Charlottesville, on Friday night, turned violent.
Trump’s candidacy excited many white nationalists, who were thrilled to hear Trump mock the Black Lives Matter movement on the campaign trail and declare that “all lives matter.”
http://www.msn.com/en-us/news/us/trump-condemns-charlottesville-violence-but-doesn%e2%80%99t-single-out-white-nationalists/ar-AApW7Ln?li=BBnb7Kz&ocid=UE12DHP

Before the planned rally could officially commence at noon, Virginia Democratic Gov. Terry McAuliffe declared a state of emergency. Police ordered the park to be vacated, ruling the planned gathering of white supremacists an “unlawful gathering.”
http://dailycaller.com/2017/08/12/at-least-one-dead-in-charlottesville-as-protests-continue/

James Alex Fields Jr., 20, was booked into the Albemarle-Charlottesville Regional Jail on one count of second-degree murder, three counts of malicious wounding, and one count of failing to stop at an accident that resulted in a death.
WORD HAS IT THAT HE DIDN’T DO IT INTENTIONALLY, THAT HE JUST PANICKED WHEN A CROWD STARTED TO GATHER.
DOESN’T MATTER… HE’LL BE HELD UP AS A TYPICAL WHITE CRIMINAL AND CRUCIFIED
http://www.foxnews.com/us/2017/08/12/ohio-man-20-identified-as-suspect-accused-driving-car-into-charlottesville-protesters.html

I’LL BELIEVE JUSTICE WILL PREVAIL WHEN BILL AND HILLARY CLINTON ARE TRIED,CONVICTED AND SENT TO PRISON.
OH, THEY’RE DEMOCRATS… SORRY

Who is Behind the Police Stepping Aside and Ignoring Facist Antifa Violence at Events Around the US?
SEE IF YOU CAN GUESS
For over a year at nearly every event NOT sponsored by Leftist Democrat and Black Lives Matter groups, the Police have stepped aside and allowed horrendous acts of criminal violence against event participants while rarely arresting anyone committing these heinous acts.
These violent groups, like Facist Antifa, are now inciting murder at these events. Who is allowing this to happen? Will the FBI please investigate these groups and who is ordering the police to allow them to commit violence?

Trump comments on violence at white nationalist gathering in Charlottesville
HIS REMARKS WEREN’T NEARLY GOOD ENOUGH FOR THE SOCIALISTS..
HE DIDN’T SAY: YOU WHITE PEOPLE ARE ALL GUILTY!!!

Michael Moore and other celebrities like Rob Reiner and Rosie O’Donnell were quick to blame President Donald Trump for the violence that broke out Saturday in Charlottesville, Virginia.
“Trump’s America: The last days of White rule. It’s always a bitch to have to give up power you’ve held for 300 years,” the 63-year-old filmmaker tweeted after riots broke out in the city during a white nationalist rally between white supremacists and counter protesters.
http://dailycaller.com/2017/08/12/michael-moore-other-celebs-blame-trump-for-charlottesville-riots/

Hundreds of protesters marched through Oakland on Saturday night, with some briefly blocking traffic on the Interstate 580 freeway in what organizers called an “emergency solidarity” demonstration in response to the violence at a white supremacist rally in Virginia that left one woman dead and many injured.
Earlier in the day, Bay Area politicians were among the flood of officials condemning the bloody clashes in Charlottesville and President Trump’s equivocal response, in which he did not single out neo-Nazis, members of the Ku Klux Klan or white nationalists, insisting that “hatred, bigotry and violence” were coming from “many sides.”
http://www.sfgate.com/bayarea/article/Protesters-call-for-Oakland-demonstration-against-11813719.php 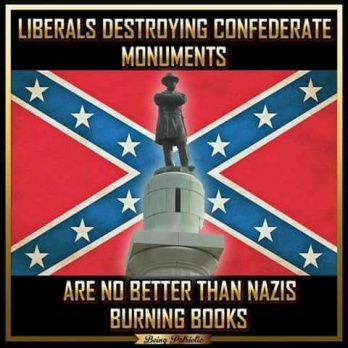 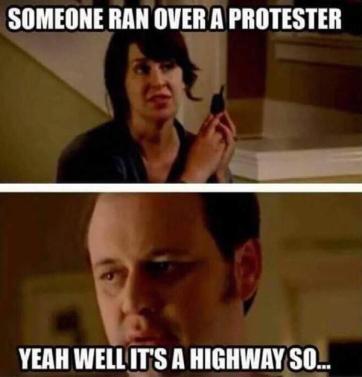 TO THOSE OF YOU WHO WASTED YOUR TIME HERE, I THANK YOU