If you only get your news from the MSM and Left-wing social media, you are no doubt TOTALLY SURE that President Trump is carrying our country to Hell in a basket.  Nothing could be farther from the truth.

Stock Market: Since the 2016 presidential election in November, the Dow, a benchmark index of stock performance, has set 48 record-setting closing highs. Millions of Americans are benefiting in their retirement savings accounts. 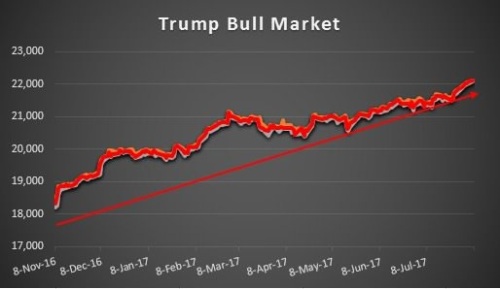 National Debt: Our national debt has decreased by $102 Billion since Trump’s inauguration. During Obama’s first 200 days, it increased by more than $1 Trillion. Trump also shaved $1.6 billion off the cost of his Air Force One and the military’s F-35 airplanes.

Inflation: US inflation rate decreased 1.6% in June, an eight month low. This is in part due to President Trump’s energy policies that are making gas and electricity cheaper which, in turn, means Americans have more to spend on other stuff..

Manufacturing: The US Manufacturing Index soared to a 33 year high, the best number since 1983 under President Reagan.

Trade: Trump also killed the TPP, opened up our exports of beef and LNG gas to China, and made Mexico drop the amount of refined sugar it exports to us, which will help our sugar mills sell more.

Regulations: Candidate Trump promised he’d remove 2 old regulations for each new one he implemented. As president, his administration has so far removed SIXTEEN old regulations for each new one it has implemented. He also pulled out of the Paris accord, which was burdening our economy unfairly.  Removing burdensome government regulations allows companies to spend less time and money on compliance and more on areas that create new jobs.

Housing: There have been nearly twice as many US housing sales in the past couple of months as there were under President Obama in 2009 during the same time period. Also, houses are on the market for only an average of 45 days. (In 2011, it was 84 days.)

Government Assistance: During Obama’s eight years, the number of food stamp recipients rose by 10.7 million. After just 200 days under Trump, that number has dropped by more than 1.1 million.

Illegal Aliens: The numbers sneaking across our borders has dropped 67%. SCOTUS held up Trump’s travel ban and ICE has arrested 66,000 illegals, most of them violent criminals, including 6,000 members of the vicious MC-13 gang.

Keep in mind that, since President Clinton decreed that “Discouraged Workers” were not “Unemployed”, the “Unemployment Rate” has tended to increase when the economy improves, due to discouraged workers becoming hopeful enough to begin searching for jobs again. The opposite also occurs. As the economy worsens, the “Unemployment Rate” can actually go down as people who want to work become too discouraged to continue seeking employment. This is why I prefer the “Percent of Americans Employed” metric. Clinton didn’t screw with that one, so it’s still meaningful across multiple administrations and without tedious explanations about why it’s stupid.  This is also why both the decrease under Trump and the increase under Obama reflected less of the good and bad changes in their respective economic policies.