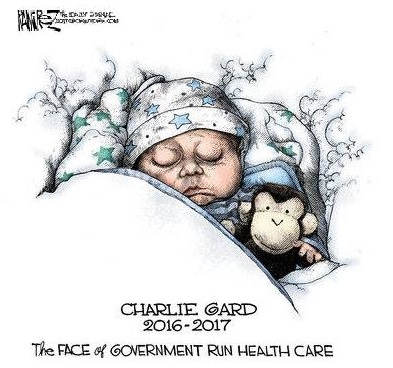 CHARLIE GARD: Charlie Gard’s parents were unable to use the £1.3 million (about $1.5 million USD) they raised to transfer Charlie to the U.S. for experimental treatment. They’ve decided to start a Charlie Gard Foundation to help families in similar circumstances.

TRANNIES IN THE MILITARY: President Trump could save American taxpayers nearly $2 billion if he follows through on his plan to ban military service for severely gender-confused (“transgender”) individuals.

That is the estimate for the cost of the “transgender” military policy begun under Obama, accordign to a paper by Family Research Council.

CHRONIC FATIGUE SYNDROME: Researchers at the Stanford University School of Medicine have linked chronic fatigue syndrome to variations in 17 immune-system signaling proteins, or cytokines, whose concentrations in the blood correlate with the disease’s severity.

The findings provide evidence that inflammation is a powerful driver of this mysterious condition, whose underpinnings have eluded researchers for 35 years.

“There’s been a great deal of controversy and confusion surrounding ME/CFS — even whether it is an actual disease,” said Davis. “Our findings show clearly that it’s an inflammatory disease and provide a solid basis for a diagnostic blood test.”

FAKE NEWS: The story of a nun who received Vatican permission to witness a Catholic marriage in a remote Canadian diocese with few priests has seized international attention — the implication being it may portend a new role for women in the Church. But the situation is far from unprecedented and is allowed under canon law.

I’LL POST MORE “INTERESTING BUT TOO BRIEF FOR A WHOLE BLOG” BELOW IN COMMENTS IF I FIND ANY MORE TODAY.