Welcome to my garden

I do most of my gardening in containers — flowerpots in the window boxes, planters on the porches and deck — because this is Wisconsin, and sometimes you have to be able to move your plants quickly… such as when a late spring frost (or an early autumn one) threatens to kill everything, or when hailstorms and/or severe winds are in the forecast. Problem is, once my morning glory vines are established, I couldn’t move the things if I wanted to. So I just have to pray that nothing will come along that might damage them. 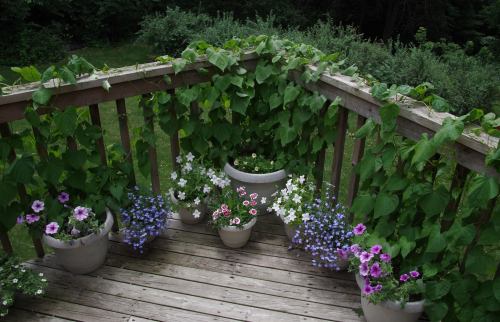 The morning glories seldom bloom earlier than August, and it’s hard to be patient through June and July when I’m just working on getting the vines to grow up the vertical posts and then across the horizontal ones. It’s a LOT of work, because the vines will not do that naturally — they want to just turn around and twine around themselves — so I have to keep after them all the time until I get them growing where I want them. If I didn’t love morning glories so much, I would never have the patience they require. But when they finally do bloom, the payoff is spectacular.

Along the top of the second picture above, you can see a little bit of the spirea hedge that runs along the edge of our back yard. It doesn’t look like much now, but back at the end of May it was gorgeous. Spirea have a very short bloom time, and if you blink, you miss it. Luckily, my husband got some good pictures of them this year: 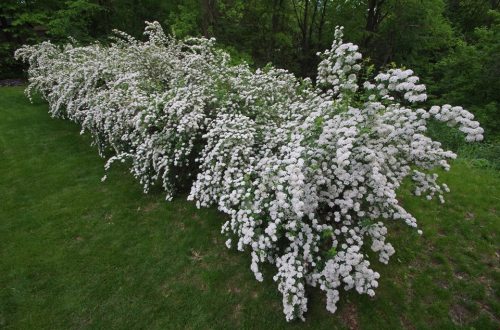 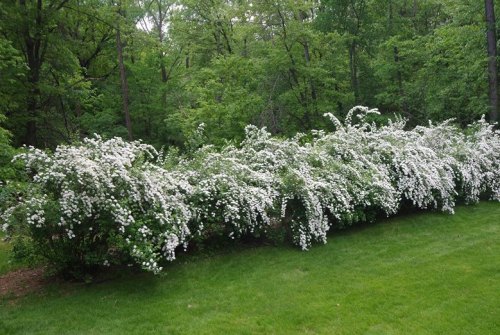 The garden shed you see in the middle picture is the same one under which we had baby foxes living four summers ago (you can see pictures of them here). Right now there’s a groundhog living underneath it — a groundhog with an unfortunate taste for coleus. I had a couple of really nice coleus plants out there, one on either side of the shed door, and they got nibbled down to stubs. Fortunately, he doesn’t mess with any of the plants that are close to the house.

Filed under How Does Your Garden Grow?

3 responses to “Welcome to my garden”