Former President Bill Clinton ridiculed current President Donald Trump for not being 100% truthful in his public remarks saying, “I wouldn’t know an alternative fact if it hit me in the face.”

Back in 1998, President Bill Clinton was impeached for LYING UNDER OATH to a FEDERAL GRAND JURY.

Yeah. Not at ALL like a certain former president who turned his administration into a soap opera and ruined the life of a 22-year-old intern, because he couldn’t keep his presidential man parts in his pants.

Democrats pooh pooh the idea that Democrats cheat to win elections. According to them, those of us who want to clean up the voter rolls and require voters to produce photo i.d. are just raaaaaaaaaaacists.

Once again, reality bites them in their lying asses.

In July 2016, Andrew J. Spieles was hired by Democrats to to register as many voters as possible.

This week, he was sentenced to 120 days in prison for submitting falsified voter registration forms to the registrar’s office.

Some of them listed dead people, while others had fabricated birth dates, middle names, and social security numbers, because they had been filled out by Spieles, not by the people named.

Comments Off on But but but

Sorry, pal, but YOUR FEELINGS are not NEWSWORTHY

June 27, 2017: CNN’s Jim Acosta tweeted like a whiney child, because he didn’t get called on at the WH briefing.

“Does this feel like America? Where the White House takes q’s from conservatives, then openly trashes the news media in the briefing room.”

One of the leading hypocrites in America today

Sally Kohn’s bio lists her as “one of the leading progressive voices in America today” and “a CNN political commentator.”

In the wake of last week’s shooting, she counseled the nation to tone down their rhetoric. This week, she tweeted this:

Comments Off on One of the leading hypocrites in America today

Sarah Palin is suing the New York Times. Jake Tapper says she has a strong case, since Loughner’s obsession with Giffords began years before Palin posted her “target” map that merely showed what congressional districts Republicans should focus on trying to win. 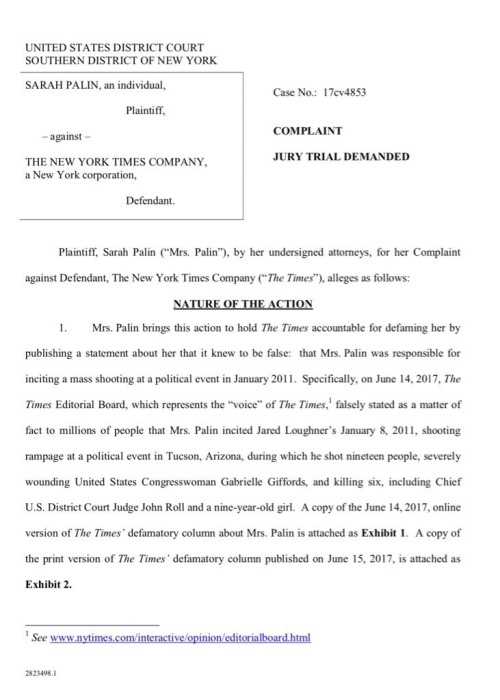 Comments Off on It’s ON

Reality Check – Dear Liberals: Obamacare Got Us Into This Mess. So You Can Shut Up, Now. [2:46]