The Female Won! Why Are They So Bummed? 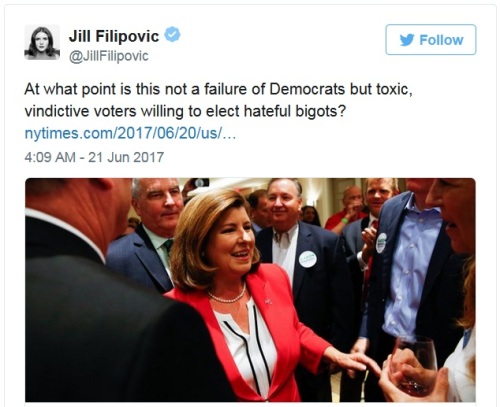 “Congratulations to our newest member of Congress, Karen Handel. But if you think feminists and other Democrats are happy about a woman winning an election, if you think they’re celebrating this victory over rape culture and toxic masculinity and whatnot, you haven’t taken into account that the woman in question is a Republican.”

“No matter what the Dems threw at her, she persisted nevertheless.”

“A woman shatters the glass ceiling, and the same people who told you to vote for Hillary Clinton whether or not you like her or agree with her — based solely on her genitalia — are super-bummed. The same people who called you a misogynist for refusing to vote for a woman are angry that another woman won something. It’s almost as if Democrats’ ideals and principles are disposable when they interfere with their political goals.”

4 responses to “The Female Won! Why Are They So Bummed?”