In the most expensive House race in history, the Democrats are claiming victory, even though they only lost the election by 7 points.  This puts them at 0-5 in the 2017 special elections races. 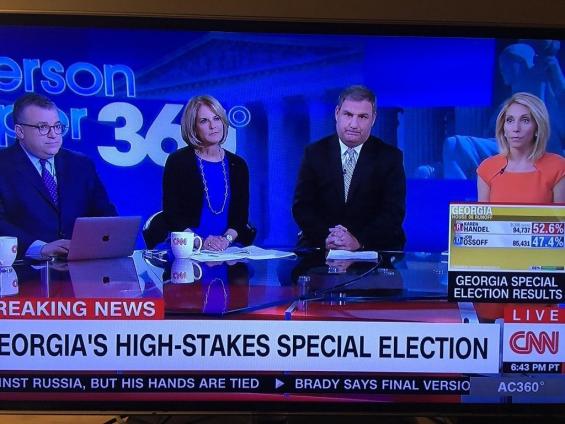 [CTH: The looks on theirs faces!!! LOLOL]

Milano previously said she wanted “to puke” after Ossoff’ failure to reach the 50 percent threshold required to avoid Tuesday’s runoff.

On Tuesday, the Who’s the Boss star launched a social media campaign encouraging people to tweet photos of themselves after hitting the polls.

Despite the belief of numerous political experts that Ossoff would fall short in the Republican-dominated district that helped send Trump to the White House, the president had earlier declared Tuesday’s election to be a matchup between “Hollywood vs. Georgia.”

“This was a winner take all and it was a huge win for Republicans and a big loss for Democrats.”

THERE WERE TWO OTHER SPECIAL ELECTIONS; THE DEMS DIDN’T DO ANY BETTER

Republican Ralph Norman has won a victory that was closer than expected in a special election to fill the South Carolina congressional seat vacated by Mick Mulvaney.

The Republican won just more than 51 percent of votes cast Tuesday in the 5th District. That’s compared with about 48 percent for Democrat Archie Parnell.

IN THE RACE THAT WAS BARELY MENTIONED, BODY-SLAMMING A SLIMY REPORTER DIDN’T HURT GIANFORTE IN MONTANA:

Republican Greg Gianforte defeated Democrat Rob Quist and Libertarian Mark Wicks, earning more than 50 percent of the vote. Gianforte will be sworn in as a member of the United States House of Representatives on June 21, 2017.

Atlanta Mayor: Ossoff Took Outside Money Because “He Wants to Win”

Chalian talking about how the victory was huge for Republican even though it was a seat they have controlled for a number of years. “This was the best shot Democrats in these special elections to really try to make a victory in the Trump era,” he explained to Lemon. “And they came up short, which now, of course, is going to create a whole series of questions about how the Democratic Party should run in the era of Donald Trump because they came up short here.”

15 responses to “Democrats Win!… Sort of”