Defend Our National Security from Jihad

ISIS (the Islamic State) has publicly called for jihadists to infiltrate and attack America.

1) a pause in refugees
2) creation of extreme vetting
3) blocks jihadists from terrorist hotbeds.

Radical Leftist judges have blocked this order, but President Trump is appealing.

The ACLJ is preparing to file legal briefs at the Supreme Court to defend the constitutionality of this lawful Executive order.

You can add your name to the brief:

Comments Off on Defend Our National Security from Jihad

From The Duffel Blog.

RAQQA, Syria — The self-proclaimed Islamic State has issued a statement condemning self-proclaimed comedian Kathy Griffin, accusing her of “cultural appropriation” after she posed for a photograph with a mock severed head of President Donald Trump.

The group, which has been protective of its brand ever since taking over vast swaths of Iraq and Syria and establishing itself as the premier beheading agency in the Middle East, said it was deeply disturbed by Griffin’s “ignorant and offensive” use of a “sacred Islamic State tradition.”

“This is just another example of a privileged white woman culturally appropriating the proud custom of a marginalized people. Beheadings are our thing, not your thing,” said the statement, which was released on Telegram.

Reports indicate that ISIS was at least somewhat relieved to see the swift and overwhelming backlash against Griffin on social media.

“Of course, the West’s social justice ‘warriors’ have always been our ally, and once again, they did not disappoint. We’re thankful that our fatwa friends immediately identified her offensive appropriation of one of our most cherished rituals,” said Aahil al-Raqqa, an executioner for the group.

According to sources close to the matter, it wasn’t simply Griffin’s portrayal of a beheading that was offensive, but also her lack of attention to detail to such a definitive aspect of ISIS culture.

“The face was so bloodied you could hardly see it,” al-Raqqa said. “Who does that?” he asked, adding that the point of displaying heads is so the media could identify the beheaded.

“She might as well have held up some plastic model head with a toupee and a lot of ketchup. This is even worse than when the Oberlin cafeteria served that pathetic excuse for Ban Mhi, or when those two American chicks in Portland stole burrito recipes from some poor abuelas down in Rosarito.”

“I think that I shall never see
a skank as vile as Kathy G.”

This is my original thought for this year. Stay tuned for 2018, I may come up with another one by then.

Granny always told me, “When you find yourself in a hole, stop digging.” Apparently this red-haired pig never had a granny.

Her press conference alongside Gloria Allred’s kid was an unmitigated disaster. The fake apology quickly degenerated into a Hillary-like blame everybody else session. 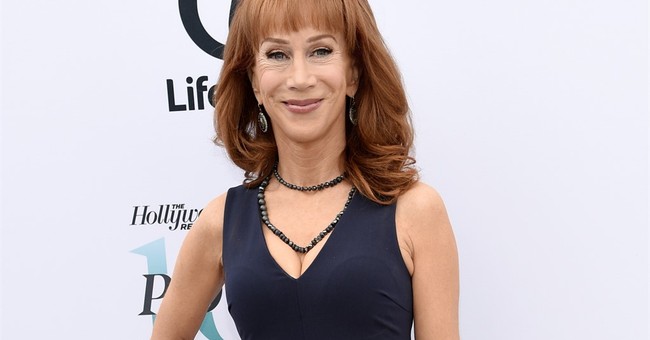 The question is: What ever made Griffin and photographer Tyler Shields think that it was acceptable, or even funny, for Griffin to pose as an Islamic State terrorist would, holding what looked to be the hacked-off head of a U.S. president?

It is clear that the photo — posted Tuesday on TMZ — was not a spontaneous gaffe. Griffin and Shields produced a video about the production in which Griffin joked, “We have to go to Mexico. Because we’re going to prison, federal prison.”

Since Trump won in November, he has been the brunt of hostile salvos lobbed by left-leaning entertainers. At a women’s march following Trump’s inauguration, Madonna confessed, “Yes, I’m angry. Yes, I am outraged. Yes, I have thought an awful lot about blowing up the White House.” Her remarks barely registered on cable news’ registry.

But when Republicans target Democrats in less direct fashion, they can be accused of inciting violence. Griffin herself assailed former GOP vice presidential candidate Sarah Palin for releasing a map with targeted congressional districts in crosshairs. When a madman shot and critically wounded Rep. Gabby Giffords, D-Ariz., whose district was in the map, Griffin tweeted, “Happy now Sarah?”

[CtH: The Gifford shooter also proved to be a Democrat who had volunteered on Gifford’s campaign.]

Total elapsed time from severed head to “he broke me”: Three. Whole. Days.

Griffin wanted the image of the severed head to go viral, and it did — along with Griffin’s perpetration of the image. If Griffin’s career is over, it will have ended due to her own suicidal act and not due to pressure from the Trumps. You live by the meme, you die by the meme.

Kathy Griffin: Donald Trump is ‘messing with the wrong redhead’

“Kathy has made a decision,” Bloom said. “She is not going to stop speaking out for women, LGBT rights, vets and others. She will continue to be the fierce, brutally honest “she-ro” that millions love. She will continue to push the edges of our comfort level, to challenge us and make us think.”

Plus, as Griffin reminded reporters, “I’m not good at being appropriate. I’m going to make fun of him more now.”

WHEN THE DEFIANT SCHTICK DIDN’T WORK:

Kathy Griffin: The First Family Is ‘Trying to Ruin My Life Forever’

“A sitting president of the United States and his grown children and the first lady are personally—I feel—personally trying to ruin my life forever. Forever,” the comic said. “You guys know him, he’s never going to stop.”

THAT’S IT…PICK A FIGHT WITH AN 11 YEAR OLD BOY.

“It’s not about trying to be an equal-opportunity offender anymore because Hillary got such a beat down. It’s his turn. So I’m happy to deliver beat down to Donald Trump — and also to Barron,” Griffin told Vulture at the Equality Now Gala on December 9.

.@kathygriffin admitted in December that she was going after Barron Trump. Now she’s crying misogyny at the direction of @LisaBloom. Moron. 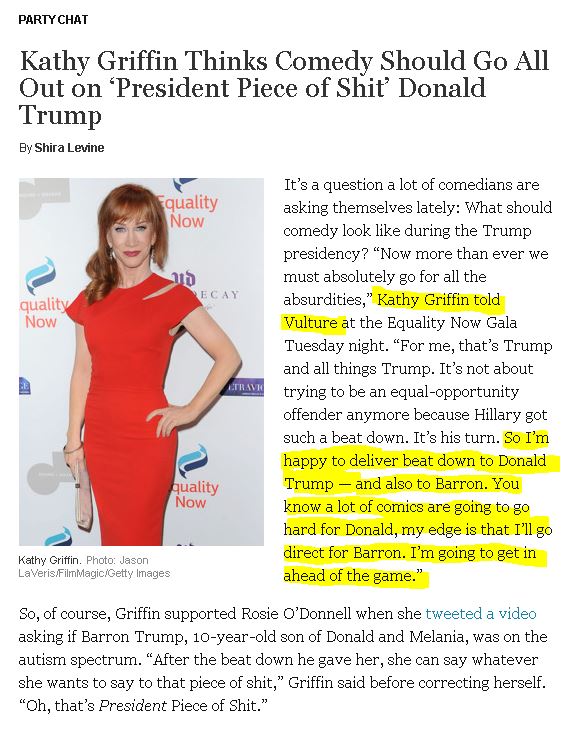 Kathy Griffin Gets the Ax From Last Theater in Comedy Tour

HEY, KATHY… PICK UP A BIBLE, ANY BIBLE. IT’S OK, YOU WON’T BURST INTO FLAME. FIND THE PART THAT SAYS: ‘WHATSOEVER YE SOW, THAT SHALL YE ALSO REAP.’ GET IT YET???

Kathy Griffin’s offensive against Donald Trump Friday apparently fell on deaf ears … because the only remaining venue that would allow her to perform has just pulled the plug.

We’ve learned Kathy’s concert at the Uptown Theatre in Napa scheduled for June 17 has been canceled. This follows 6 other cancellations, including bergenPAC in New Jersey which canceled hours before Kathy’s news conference.

The Uptown Theatre cancellation is especially significant because the decision was apparently made after she took the mic with her lawyer. The Uptown folks said on Wednesday the show would go on, but they clearly had a change of heart. 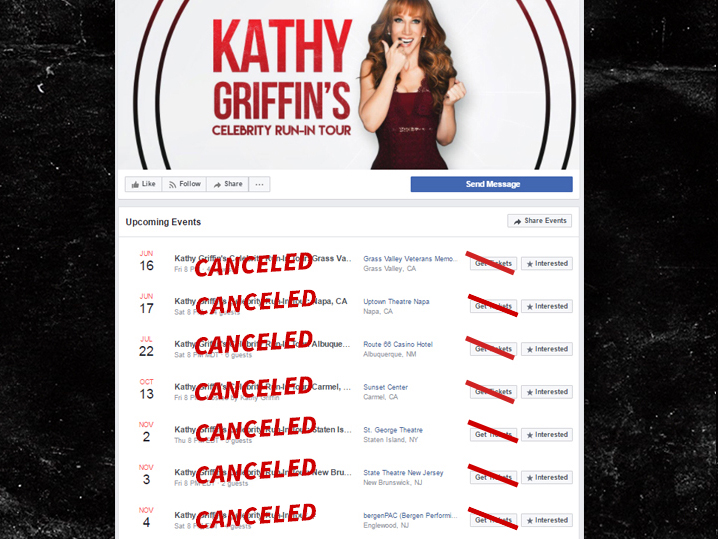 RELAX, SWEETIE — LIBERALS NEVER GET PUNISHED FOR ANYTHING.

Her criminal defense attorney, Dmitry Gorin, said the fact that Griffin is being investigated by the Secret Service over a joke is “outrageous.”

“The Secret Service is going its job, I suppose,” he said, adding that he expects the probe to be closed quickly and Griffin to be cleared.

Griffin also lamented that five of her scheduled shows have been canceled amid the backlash since the video was posted. CNN has also yanked her from its New Year’s Eve coverage.

Griffin’s ‘Trump’ beheading in PAC ad for special election: ‘Liberals will go to any extreme’

“These angry liberals will go to any extreme to elect Jon Ossoff,” a narrator in the ad says. “There’s a reason 95 percent of Ossoff’s campaign donors are out-of-state liberals.”

Tucker Carlson: Kathy Griffin Is the ‘Perfect Embodiment of What the Modern Left Believes’

WELL WORTH THE 5 MINUTES

As performance art, it was lame, least creative stunt of the week by far. As a political statement it didn’t even make any sense but it did have the effect of briefly making Griffin famous again and of course, that was likely the whole point. Today, Griffin elbowed her way back into the news cycle holding a press conference with celebrity misery chaser Lisa Bloom. 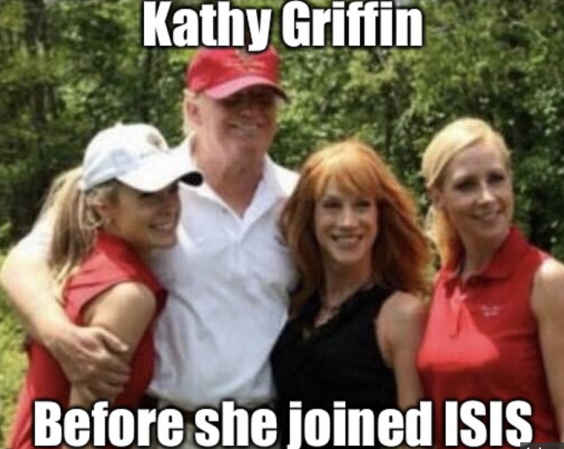 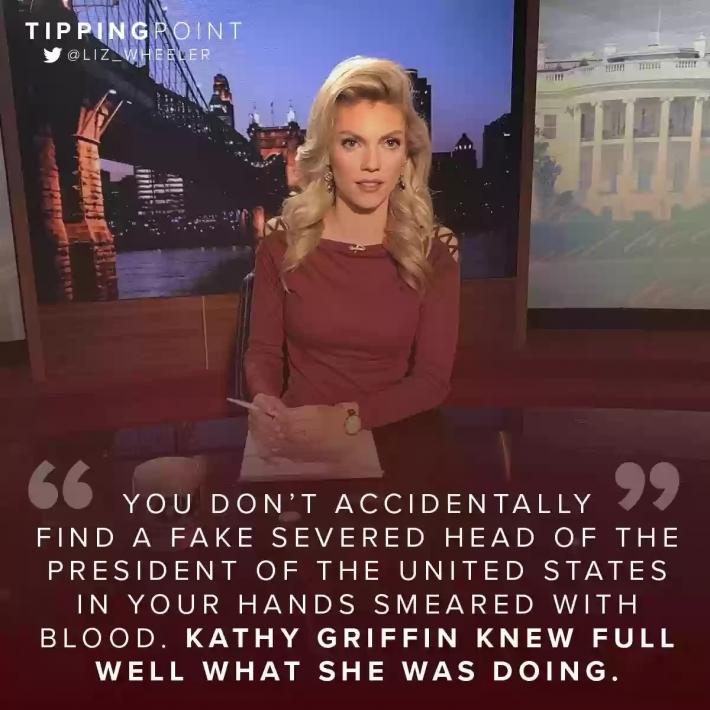 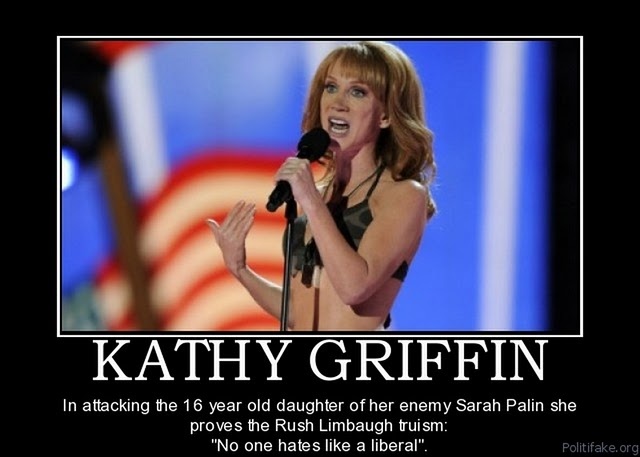 SURE WAS DIFFERENT WHEN THE STREET NEGRO WAS IN OFFICE, WASN’T IT?

The elite are outraged over Trump's climate decision. So why did #hillaryclinton​ take a private jet to a fundraiser just 20 MILES away? pic.twitter.com/LbDQf80S39

Comments Off on Elitist Climate Hypocrites

You gotta watch this one!

“The Earth knows how to save itself.”

Comments Off on Mascot Update: Bunny helped in the garden