The Virgin and the Apocalypse

“The antimary and this new antichristian movement are opposite sides of the same demonic coin. The two came together with Kathy Griffin’s beheading stunt this week.

“They share a common mission: to eliminate all that is good, true, beautiful, and holy.  …

“There is a third alternative, however, that offers hope and a future. Christians must return to their faith and to the spiritual elements that we know destroy Christ’s enemy.

“As I wrote in The Marian Option: God’s Solution to a Civilization in Crisis, after 2000 years, we know what these are: Mass, Eucharistic adoration, the Rosary, confession, Marian consecration. We know these things work.

“And there is more than enough evidence that Mary has been behind the vanquishing of Christian enemies for centuries. It is time we call upon her again to conquer all that is opposed to her and to her Son.”

Comments Off on The Virgin and the Apocalypse

What’s with the Never-Trumpers?

I have concluded that there are a few reasons that explain conservatives who were Never-Trumpers during the election, and who remain anti-Trump today. The first and, by far, the greatest reason is this: They do not believe that America is engaged in a civil war, with the survival of America as we know it at stake. While they strongly differ with the Left, they do not regard the left–right battle as an existential battle for preserving our nation. On the other hand, I, and other conservative Trump supporters, do.

To my amazement, no anti-Trump conservative writer sees it that way. They all thought during the election, and still think, that while it would not have been a good thing if Hillary Clinton had won, it wouldn’t have been a catastrophe either. That’s it, in a nutshell….

In other words, I believe that Donald Trump may have saved the country. And that, in my book, covers a lot of sins — foolish tweets, included.

William Jacobson at Legal Insurrection has a long piece about what Prager said, how Never Trumpers responded and what his own position is.  It’s interesting reading if you have the time.

Sometimes it appears Trump gets a sadistic kind of pleasure making liberals lose their minds. He announced yesterday the United States is pulling out of the phony climate agreement made by the FORMER preezy, who pledged billions of US taxpayer dollars to help third world toilets “fight the scourge of climate change.” China, by the way, has pledged zero dollars. Not dime one, and they along with India are two of the biggest polluters on the planet.
Predictably, the left is in total meltdown, since the climate hoax is one of their sacred cows. All these dumbasses are convinced the world will erupt in flames tomorrow. It would be humorous were it not so pathetic.

I wanted to say a few things about President Trump’s decision to pull out of the Paris Climate Accord — AKA the World’s attempt to extort American taxpayers while killing American jobs.

But first, I thought I’d take you on a little trip down memory lane.

Journey with me to Paris when these world leaders were playing Barack Obama like a cheap banjo.

Instead of representing the people of the United States, Obama bent over backwards and let these countries extort us with wild abandon.

And during a Paris press conference, Obama had this exchange with a reporter:

This “Paris Climate Accord” has nothing to do with saving the planet.

The purpose was clear from the start. It was the world’s attempt to extort us. Nothing more.
http://patriotretort.com/extort-us-interruptus/

In ditching Paris deal, Trump does right by America and the world

In quitting the Paris Accord, President Trump on Thursday did nothing to shift the course of US environmental policy — not even on carbon emissions. But he did put the world on notice that no president can unilaterally commit this nation to such far-reaching agreements.

The Constitution is clear: No treaty is binding on the US government unless ratified by the Senate. That tanked the Kyoto Protocol, a 1997 anti-warming treaty that the Senate rejected 95-0. And it would’ve killed the Paris deal that President Obama signed in 2016 — except that his negotiators shaped an “agreement” that wouldn’t go to the Senate.

But one that still would’ve been used to rewrite US law, if the courts went along. (And a President Hillary Clinton’s judicial picks would have ensured that they did.)
http://nypost.com/2017/06/01/in-ditching-paris-deal-trump-does-right-by-america-and-the-world/

Trump: Time to Put Ohio, Michigan, and Pennsylvania Before Paris

President Donald Trump gave a shout-out to the “forgotten” industrial heartland that delivered him the White House as he announced America’s unilateral withdrawal from the Paris Climate Accords Thursday.
“I was elected to help the citizens of Pittsburgh, not Paris,” Trump told those gathered in the White House Rose Garden, as he gave a forceful economic-nationalist condemnation of the global climate agreement, under which the United States is to meet progressively lower caps on certain emissions while subsidizing developing countries in the hope they do the same.

HERE THEY COME, RIGHT ON CUE:
‘Traitorous Act of War’: Liberals Angrily React to Trump Pulling Out of Paris Agreement

Billionaire environmentalist and Democratic donor Tom Steyer even said that Trump’s actions were an act of war against the American people. 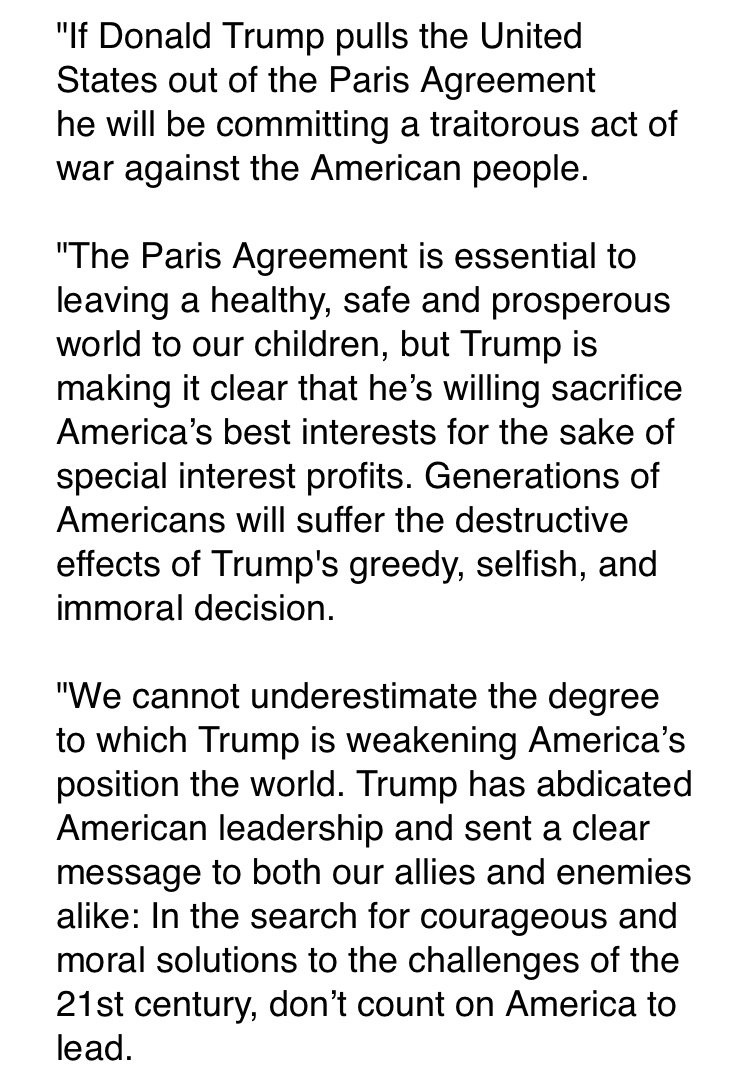 What a wonderful day for the American worker!
But not for liberal elites.
They suffered a COMPLETE MELTDOWN! 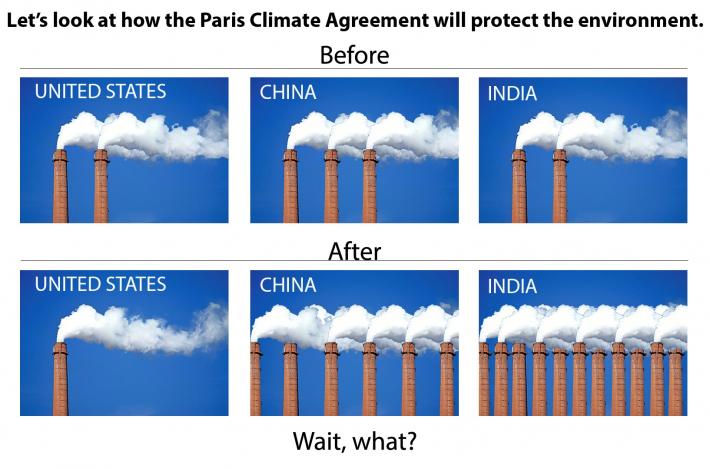 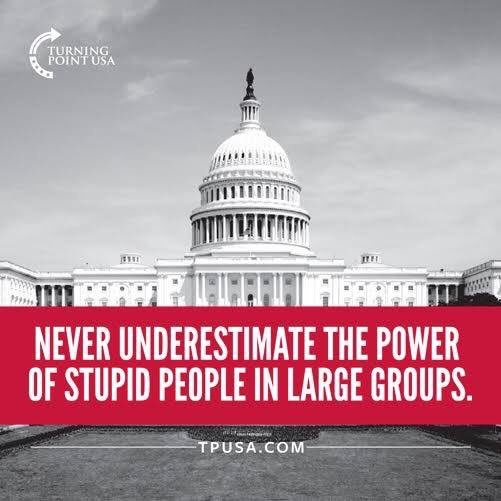 Crybaby Obama Attacks POTUS Trump For Pulling Out of Paris Climate Accord
The cost of the climate deal was $3 trillion.
Trump decided to stand with the American worker and against globalist elites.
The Dow Jones Industrial also closed at a record high on the news today. 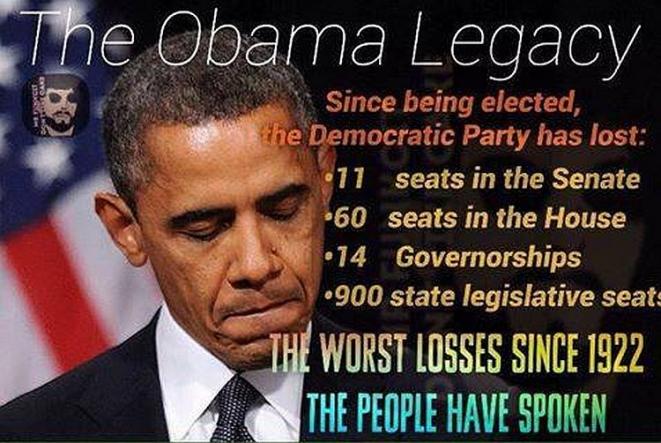 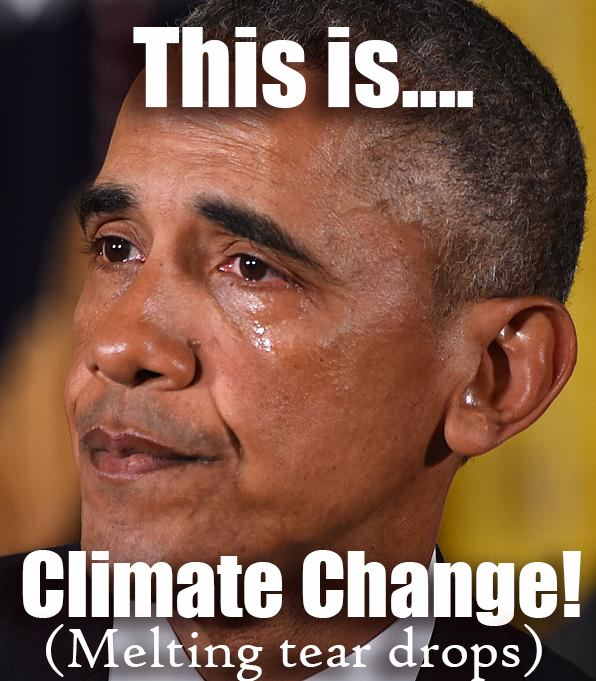 THAT’S FINE; THEY WON’T DO IT WITH FEDERAL MONEY.
New York City Mayor Bill DeBlasio vowed to issue an executive order soon to honor the goals of the Paris accord, which is to keep future global warming below 2 degrees Celsius.

“We will not ignore the science and reality of climate change which is why I am also signing an Executive Order confirming New York’s leadership role in protecting our citizens, our environment, and our planet,” Cuomo said.

“If the President is going to be AWOL in this profoundly important human endeavor, then California and other states will step up,” Brown said.
http://dailycaller.com/2017/06/01/democrats-plot-revolution-to-circumvent-trumps-paris-decision/

“Donald Trump [is] issuing a suicide note for the rest of the world, including, ultimately, for the people of the United States, as well,” Kumi Naidoo, the former head of Greenpeace, told Democracy Now in an interview Thursday.

Trump announced Thursday he would withdraw the U.S. from the Paris accord, but he also said the U.S. may rejoin the agreement if they can get a fair deal. Environmentalists were still freaking out.