How Low Can You Go?

Kathy Griffin, the unfunny, foul-mouthed waste of time who calls herself a “comedian,” whose act has degenerated into bashing republicans, Christianity, and straight white people has made a successful attempt to get people to notice her again. What she did was completely disgusting, as much of what passes as “art” these days is. Of course, absolutely nothing will come of it. Most leftists see nothing wrong with what she did. Had anyone held a likeness of a beheaded Barack Obama, his Justice Department would have them immediately jailed. What she did was just another effort by the left to slither even lower in the cesspool of “I hate Trump more than you do.”

Griffin has been an outspoken critic of the president; in October, the comedian and television personality cut a mock campaign advertisement which featured her repeatedly telling the then-Republican presidential candidate to “f*ck off.”
http://www.breitbart.com/big-hollywood/2017/05/30/kathy-griffin-beheads-donald-trump-shock-bloody-photo/

FROM 2007:
EMMY WINNER KATHY GRIFFIN: “SUCK IT, JESUS, THIS AWARD IS MY GOD NOW”

On September 8, at the 59th Annual Creative Arts Emmy Awards, comedian Kathy Griffin won Outstanding Reality Program for her Bravo show, “My Life on the D-List.” In her acceptance speech, Griffin said, “Suck it, Jesus, this award is my God now.” Fox will televise the Primetime Emmy Awards on Sunday, September 16 from the Shrine Auditorium in Los Angeles.

In an interview with Houston’s gay magazine, OutSmart, Griffin described herself as a ‘complete militant atheist.’ Unfortunately, her kind of vulgar in-your-face brand of hate speech found a receptive audience on Saturday: The Hollywood Reporter says her foul remark ‘drew laughs

Franken and Griffin will also hold “an intimate discussion about Franken’s new book ‘Giant of the Senate’” on July 7 at the Wallis Annenberg Center for the Performing Arts in Beverly Hills.

Breitbart asked press aides for both Democratic politicians if the Senators were planning to return the funds donated by Griffin. Neither office has responded to Breitbart.

The Beverly Hills center did not respond to a question about canceling the July 7 event.

But later in the evening, the Secret Service issued a statement — which did not cite the controversy, but was issued in response to it — which read, “The U.S. Secret Service has a critical mission. It is always unfortunate when people make statements that could be perceived as threats. We don’t have the luxury of knowing a person’s intent. Each alleged or perceived threat has to be investigated thoroughly which taxes Secret Service manpower and resources that could be utilized elsewhere.”

Kathy Griffin apologizes for beheaded Trump photo: ‘I crossed the line’
“I sincerely apologize,” the comedienne said in a 30-second video posted to her Twitter account. She said she “crossed the line” and is “just now” seeing the outpouring of negative reactions to the photo,” adding “The image is too disturbing.”
Griffin also said she is taking down the image and asked the photographer to do the same.  The photographer, Tyler Shields, defended the photo shoot was a work of “art.”

[CtH: I remember them having a very different reaction about “art” and “comedy” when a rodeo comedian did some schtick wearing an Obama mask. Never mind that the same guy he had done the same schtick in a Bush mask when Bush was president and they were fine with that. Freakin’ hypocrites.]

OF COURSE, THE LEFT’S REACTION WHEN SOMETHING BLOWS UP ON THEM IS ‘MOVE ON’

CNN Panel: ‘I Think We’ve Got Much Bigger Issues to Focus on Than Kathy Griffin’

[CtH: Funny how that goes.  When it was Sarah Palin’s clothes and trash (the literal kind you put on the curb for pick up), they had 11 reporters committed to it.]

Braying and punishingly obvious, she specializes in unfunny comedy that tries to trade on the insult humor of comics such as Joan Rivers and Don Rickles — minus any actually amusing content. You’re better off not taking her bait. But Fox News fell for it, hook, line, and sinker.

On Tuesday morning, they were almost weeping with outrage and sorrow on Fox and Friends. You can’t fool co-host Ainsley Earhardt: “Someone had to buy that head,” she said, yelping, “They knew what they were doing!”

“What is wrong with our country?” said Earhardt, thus suggesting that the blight that is Kathy Griffin is a metaphor for the entire United States writ large. Earhardt added, “We’ll be talking about it all morning.” Of course you will.

On Monday night, Fox’s The Five led off its show with the Griffin stunt. Panelist Greg Gutfeld began with the smart angle, observing, “If we get mad, [Griffin] wins.” But then — duh — the rest of the gang of five proceeded to… get mad!

Dana Perino asserted that “this sets back the Left’s agenda” — because, you know, the American left wing takes its marching orders from Kathy Griffin. On Tucker Carlson Tonight, the host welcomed Fox News contributor Lisa Boothe, who said of Griffin’s photo, “I am very outraged!”

“Kathy Griffin should be ashamed of herself,” the president wrote. “My children, especially my 11 year old son, Barron, are having a hard time with this. Sick!”

On Tuesday’s broadcast of the Fox News Channel’s “Special Report with Bret Baier,” columnist and Fox News Contributor Charles Krauthammer characterized comedian Kathy Griffin’s photo depicting her holding the severed head of President Trump as “political pornography from a D-list comedian trying to get attention, and she has succeeded.”

Krauthammer added that he would leave the decision to let Griffin stay as one of the hosts of CNN’s New Year’s coverage up to “the mavens at CNN.” He also stated that he could assure that he wouldn’t watch CNN on New Year’s either way. 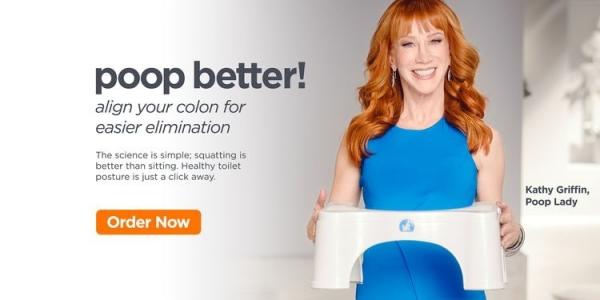 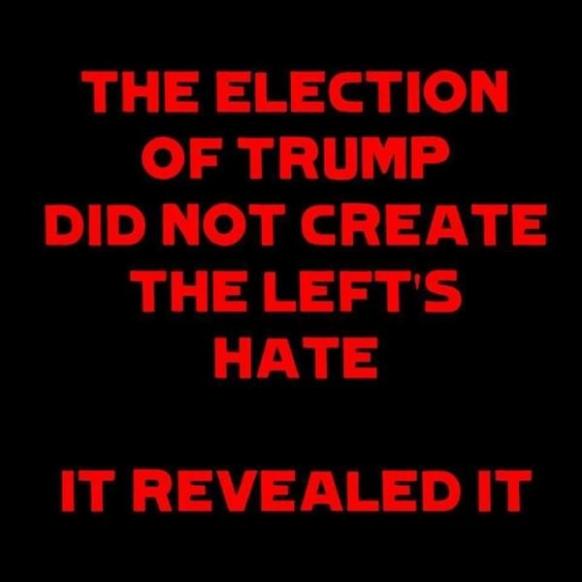 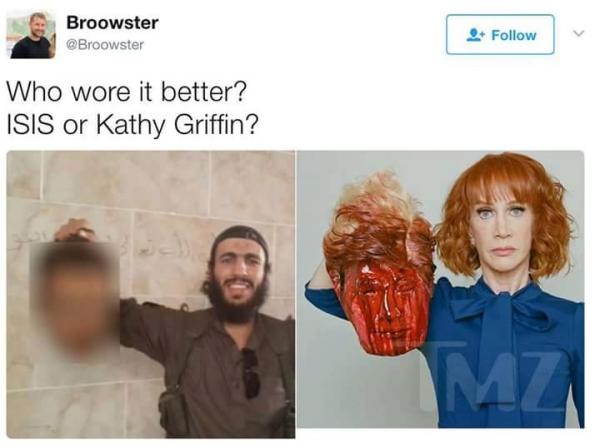 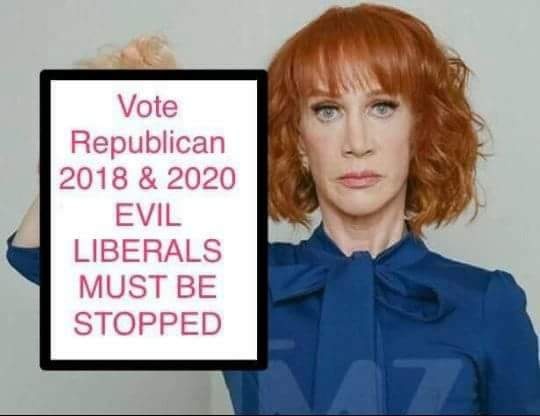