COLUMBUS, OH—Several minutes after entering a Planned Parenthood clinic in order to seek prenatal care for herself and her unborn child, local pregnant woman Kyleigh Smith was sent away with directions to an actual health clinic, reports confirmed Wednesday.

The scene reportedly turned into one of confusion and bewilderment, as Planned Parenthood personnel hadn’t been trained on what to do when a woman wanted to leave the clinic with her baby healthier than before she entered.

“Sorry, you want what? Healthcare?” a confused receptionist asked. “Hey Bob, what do we do with the ones that don’t want to kill—uh, I mean terminate the, uh, pregnancy?” she then yelled back at one of the clinic’s abortion doctors.

“Huh? Why?” the doctor reportedly called back as he was prepping for his next procedure. “Maybe she wants a condom or something? Or offer her a Tic-Tac. [Expletive], I don’t know.”

After phoning several other Planned Parenthood clinics in the region to find out what they would do in an unusual situation like this one, clinic staffers printed out a set of directions to a real health clinic that would actually try to help her and her baby, and sent Smith on her way.

ISIS Lays Down Arms after Katy Perry’s Impassioned Plea to ‘Like, Just Coexist’

So far this year, abortion business closures have outpaced new openings by more than four to one.

Twenty-one abortion facilities have CLOSED since the beginning of 2017, including 7 that did surgical abortions, 5 that did medical abortions, and 9 that referred women to abortion providers.

Only five new ones have been known to OPEN.

Last night provided once again, if needed, that there is no depth the left will not stoop to in their effort to steal elections. Trump supporters still face the risk of assault from paid thugs for no apparent reason. These are no cause for concern as far as the media whores care. This case, however, will be shouted from the rooftops:

REPUBLICANS ENDORSE VIOLENCE! THUGGISH BEHAVIOR A SYMPTOM OF THE ALT-RIGHT!!

Greg Gianforte is the Republican candidate in the Montana congressional district (an at-large one) formerly represented by Ryan Zinke, now the Secretary of Interior. The Democrats are running country music singer Rob Quist.

The Democrats have been cautiously optimistic about winning this race, though they face an uphill battle in a district (coextensive with a state) Donald Trump carried by about 20 percentage points. For their part, Republicans have viewed the race as closer than it should be.

The Dems are probably more optimistic now that Gianforte has been accused of body-slamming a reporter. The reporter is Ben Jacobs of the Guardian, a left-leaning paper. This evening, he tweeted: “Greg Gianforte just body slammed me and broke my glasses.”

I imagine that many Montanans will have little sympathy for Jacobs, who comes across as an overly aggressive twit who may have wanted to goad the GOP candidate and become part of the story for the benefit of the Democrats (presumably in less dramatic fashion, though). Whether they will find Gianforte’s response to Jacobs appropriate behavior for a congressman is another matter.

Montanans will have to sort it out quickly. The election is tomorrow.

I just remembered that in the Alaska Senate race of 2010, a supporter of Joe Miller, the Tea Party candidate and Republican nominee, had a reporter handcuffed and detained after he asked Miller an unpleasant question. There were a number of fairly small problems and incidents that, collectively, derailed Miller and enabled Lisa Murkowski, whom he had defeated in the Republican primary, to win the general election as an independent. The “arrest” of the journalist may have been one of them

Republican Greg Gianforte was accused tonight of body slamming a far left Guardian reporter on a stage one day before the Montana US House Special Election.

Gianforte is running US House seat vacated by Rep. Ryan Zinke after his appointment to Secretary of the Interior.

Rob Quist, 69 yo songwriter who has never had a real job or signed a paycheck. 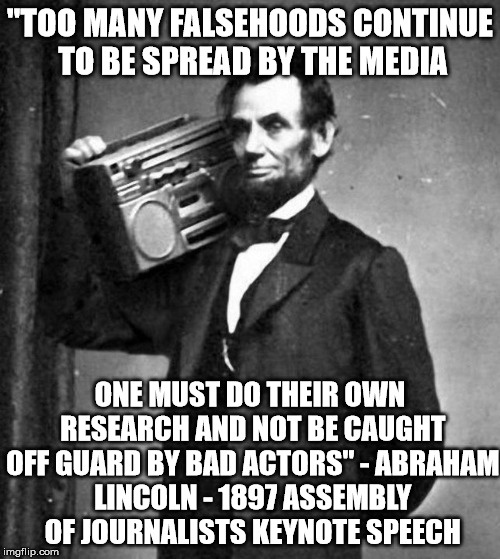 A COUPLE SNOWFLAKES IN THE COMMENT SECTION TRIED TO CORRECT THIS IMAGE, POINTING OUT LINCOLN DIED IN 1865. SUBTLE HUMOR IS TRULY LOST ON SOME PEOPLE.

IT’S ALL A GAME TO THEM

Camerota got the ball rolling by asking whether there is “some sort of larger story or message we should take away here . . . growing aggression against the press.”

The panel was only too happy to run with that ball. Take CNN political analyst John Avlon, accusing President Trump of “consciously stoking those fires of fear and anger and resentment.” Avlon later called on Montana voters to “send a message.”

Chris Cuomo ended the segment by advising President Trump to condemn the incident.

Hypocrite Rubin Loses It Over Montana Incident, Blames Trump; ‘The Fish Rots from the Head’

Importantly, any assault of anyone (reporter or non-reporter) isn’t okay. This should be common sense. That being said, the deranged reactions to the incident must be denounced too, most notably Washington Post supposedly right-leaning blogger Jennifer Rubin’s tirade on MSNBC’s All In.