On May 12, 2017, Media Research Center surveyed a full day of CNN news coverage.

Since the day Donald Trump stunned the world and denied the left their utopian ambitions of anointing the first woman president, they have waged an unending jihad to not only defeat him, but destroy him.

97% of news reporting about him has been negative. Any compromise is out of the question. Their ultimate fantasy is to impeach him by any means necessary. They stomp their feet and demand a special prosecutor to investigate the non-existent Trump-Russian conspiracy. There is nothing there; they know it, they just don’t care. Their aim is to drag an investigation into the 2018 election cycle and, hopefully, close to the next presidential contest.

Led by the charming and demure representative from the African conclave of Watts, California, Mad Maxine Waters, there has arisen a cacophony of cries to impeach the president.

The latest call came from Rep. Al Green, D-Texas, who released a statement suggesting Comey’s ouster from atop the FBI was an obstruction of the investigation “of the president’s campaign ties to Russian influence in his 2016 presidential election.” He said Trump has committed acts that “amount to intimidation and obstruction.”

“Our mantra should be I.T.N—Impeach Trump Now,” Green wrote in an email, which included a line in red pushing those who received the email to “forward this email to others who may be interested.”

Others Democratic lawmakers who have brought up the topic of impeachment include Reps. John Yarmuth, D-Ky., who told a local news station last week that Democrats were “actually pretty close to considering impeachment,” and Mark Pocan, D-Wis., who said on local radio that if there was an “impeachment clock,” Comey’s ouster would have moved it an “hour closer.” 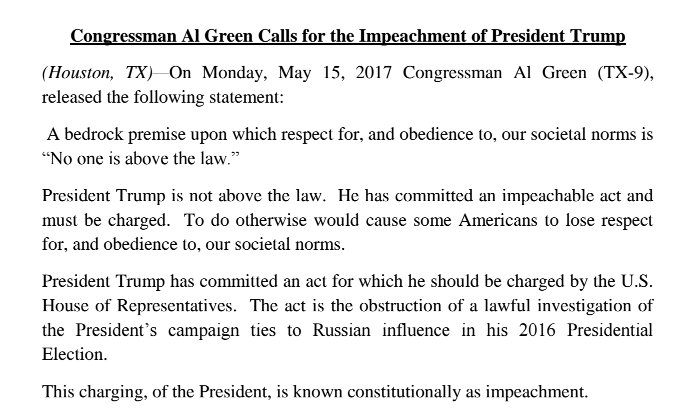 CNN’s Blitzer Pushes Guests on Trump Impeachment; ‘Are We Getting Closer’ to Impeachment?

Matthews: ‘We’re on the Trail’ to ‘Impeachment’ With Comey Firing

On Tuesday’s broadcast of MSNBC’s “Hardball,” host Chris Matthews stated that President Trump fired FBI Director James Comey “for not playing ball” and that with Comey’s firing, “clearly, we’re on the trail there to an impeachment.”

On Tuesday’s broadcast of CNN’s “AC360,” Senior Political Analyst David Gergen, who served as an adviser to Presidents Nixon, Ford, Reagan, and Clinton, argued that “we’re in impeachment territory” with President Trump.

How to impeach a president

Waters: Trump’s Disclosure of Classified Info to Russia Moves Us Closer to ‘Impeachment’

Comments Off on Ooops!

Check out the difference in RETWEET and LIKE numbers.

Comments Off on Actor Lowers Tweet Boom on PP Prez

The Times said their reporters had not visually seen the memo, but portions were read to them.

Seriously?  MORE anonymous sources?   Wait while I roll my eyes.

The White House has denied the report.

Senate Intelligence Chairman Richard Burr, R-NC, says he is skeptical that the Comey memo is real.

House Oversight Committee Jason Chaffetz, R-Utah, has officially asked the FBI to turn over all memos, summaries and recordings regarding Comey’s communications with Trump.

National Security Advisor H.R. McMaster denied the story through a written statement and in front of the press.  He described the discussion as having been “wholly appropriate.”

Morning Joe had Ned Price on to speculate about whether the Trump administration is a worse threat to us than ISIS.

Note: Price is a former Obama special assistant who donated to Hillary’s campaign and quit his job at the CIA rather than serve under Trump.

Meanwhile, CNN Money reporter Heather Long has been interviewing Trump voters for months in Ohio, Kentucky, Michigan, and Wisconsin.  She says they don’t care about Russia or the FBI.  They care about  good jobs.

ECONOMY:  Builder confidence in newly built, single-family homes hit 71 in March and 70 in May.  These are the highest numbers we’ve seen since June 2005 during the height of the prior housing boom.

I LOVE Terrell’s graphic!!!  The nod to Escher speaks brilliantly to the absurdity of the Slime Stream Media’s endless lies that circle around, going nowhere inside their liberal fantasy bubble.