From President Trump’s Proclamation of May 4, 2017 as the National Day of Prayer:

We are also reminded and reaffirm that all human beings have the right, not only to pray and worship according to their consciences, but to practice their faith in their homes, schools, charities, and businesses in private and in the public square free from government coercion, discrimination, or persecution.  Religion is not merely an intellectual exercise, but also a practical one that demands action in the world. 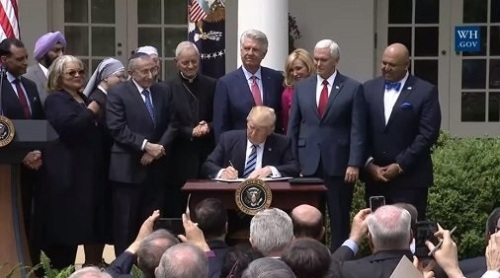 President Trump celebrated today by signing a religious liberty executive order that will protect Christian organizations like the Little Sisters of the Poor from being forced to pay for abortions.

“Freedom is not a gift from government. It is a gift from God,” Trump said in signing the order. “We are here to defend the rights of all Americans.”

“Finally, the federal government realizes the immoral and insane mandate that forces organizations like the Little Sisters of the Poor to include contraception and abortifacients in their healthcare plans,” he said. “This step today starts the process of reversing the devastating trend set by the last administration to punish charities, pastors, family owned businesses and honest, hard-working people simply for living according to their faith. This trend is in part why 60 percent of Trump voters in the last election said they were more likely to vote for him because the GOP platform is very clear on religious liberty and unborn life.”

The House of Representatives celebrated by passing their partial repeal and replace of Obamacare.  While it does not go as far as Conservatives would like, it does defund Planned Parenthood and ensure that Obamacare won’t cover abortions.

Comments Off on National Day of Prayer, Part 2