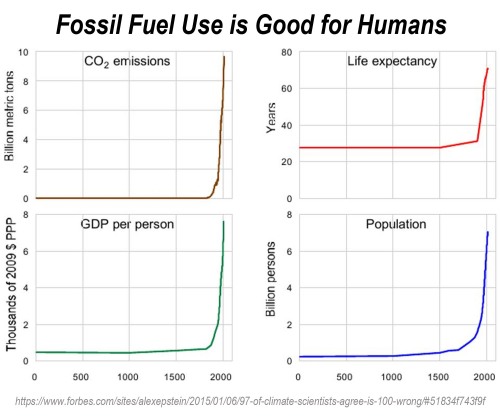 Climate activists want to make the vast majority of fossil fuel use illegal.  To justify this poverty-inducing plan, they repeat the lie that 97% of climate scientists agree with them.

TRUE:  Climate scientists DO agree that there has been a global warming trend over the past 150 years.  Some of them even concede that human beings have contributed to it.

HOWEVER, the warming trend has been tiny (0.8 degrees C), it started before the rise of man-made CO2, and it has abated in recent years even as CO2 levels have continued to rise.

LIE:  The “97% of climate scientists believe we should restrict fossil fuels” lie was invented by a guy who wants to limit fossil fuel use.  He did it by cherry picking a bunch of climate papers and falsely reporting that 97% of them agreed with him.

According to the article linked below, far from going full on Al Gore about fossil fuel use, only a relative handful of the cherry picked papers even endorse the view that human emissions of greenhouse gases are more than 50% responsible for the small amount of warming we’ve seen over the past 150 years.

The author quotes one of the scientists whose papers were included in the bogus survey. He reported that only 10 of his 122 eligible papers had been included, nine of which were rated incorrectly as to what he really said.

2 responses to “Debunking the 97% Climate Lie”